Check back everyday as new leaks and rumors for Warhammer 40k 8th edition Deathwatch Codex will be added, without notification. 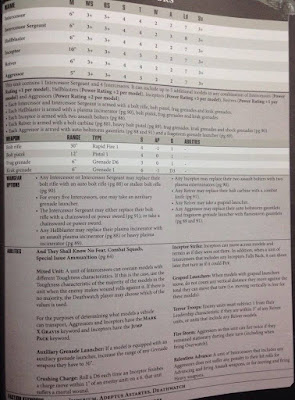 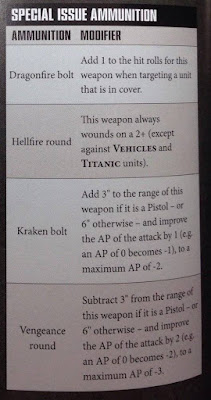 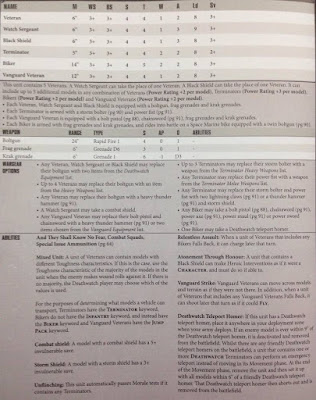 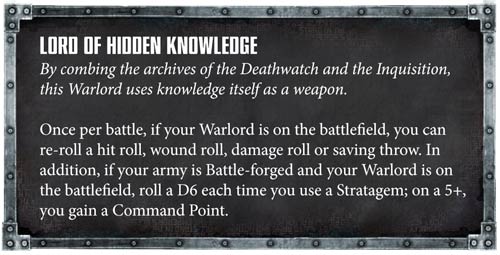 We’d recommend structuring a Deathwatch army around two Battalion Detachments – that’s six Troops and four HQs. This’ll give you a hefty 13 Command Points to spend on Stratagems, with the Lord of Hidden Knowledge Warlord Trait giving you several more across the game, depending on which Stratagems you use (and how well you roll).

We’ve talked about how Special Issue Ammunition and Mission Tactics allow you to tailor your strategies on the fly, and how your Primaris Space Marines can be assembled into Kill Teams to fulfil nearly any battlefield role. Deathwatch Stratagems are designed with that same spirit of flexibility in mind. You’ll be able to benefit from both a unique Stratagem for each xenos race, as well as a series of Doctrines that provide extra offensive bite against specific Battlefield Roles. 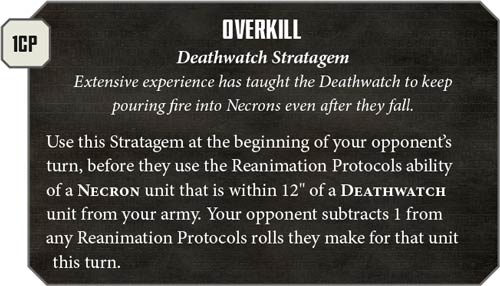 There’s nothing worse than spending a couple of turns trying to winnow down a unit of Necrons, only to watch them make a successful Reanimation Protocols roll and waste all of your hard work! With Overkill, you’ll be able to ensure your foes stay down. 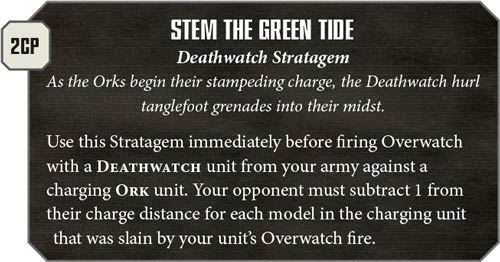 With a couple of flamers – from Aggressors, combi-weapons or any other option you choose – you’ll be able to cripple charging Orks and buy some extra space for the rest of your army. Even if you don’t prevent a charge entirely, reducing the distance they can move when they do so can be crucial in stopping key units from being swarmed.

Everyone knows that, when fighting Tyranids, it’s a good idea to shoot the big ones first – but what if your opponent is cleverly keeping their synaptic web up with a Tyranid Prime, a Neurothrope, or a Broodlord? With this Stratagem, you’ll be able to excise them with ease. 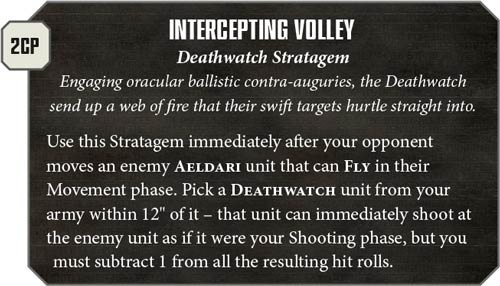 When fighting against Aeldari, pinning down units that can fly can be very tricky – whether you’re looking to peel some jetbikes off a key objective or just want to slow down a Raider packed with Wyches before it reaches your lines. This Stratagem lets you stop enemy flyers in their tracks and creates a considerable bubble of threat around your units.

An elite army like the Deathwatch can be vulnerable to the focused tactics of the T’au – where concerted markerlights can leave a unit vulnerable to a devastating combined attack. With this Stratagem, you’ll be able to thwart your opponent’s efforts to pin down your favorite units.  Even if you’re not fighting xenos, you’ll find the various doctrine Stratagems invaluable. Essentially, for two Command Points, you’ll be able to add 1 to your wound rolls against your chosen Battlefield Role:

As all these doctrines are different Stratagems, you’ll be able to use several in a turn across various different units in your army – handy!

Codex: Deathwatch was the perfect opportunity to bring Primaris Space Marines fully into the fold of the Imperium’s most elite xenos hunters, with a thematic twist – just as Deathwatch Veterans represent a collection of individuals from a range of Chapters, each with their own skills that contribute towards the performance of a team as a whole, you’ll be able to boost your squads of Intercessors with members from other Primaris units.

When you’re building your mixed units, you won’t just benefit from their weapons – many options also provide special abilities to the squad they join. In this way, you’ll be able to turn each of your Troops choices into a deadly collection of specialists benefitting from a range of stacking bonuses.

Here’s what each Primaris Space Marine role contributes to your Kill Team:

Intercessors make up the bulk of your Primaris units and are as solid a choice as they’ve always been – with Special Issue Ammunition, their bolt weapons are pretty scary, and they do a great job at holding objectives.

Reivers are great for short ranged mixed Primaris units. For one, they’ll give the squad access to Terror Troops, while for another, they can provide you with an ever-useful shock grenade, causing nearby enemies to suffer penalties to hit and preventing them from firing Overwatch should you want to make an opportunistic charge.

Aggressors are a great utility choice for Intercessor squads. As well as providing an Overwatch deterrent to anyone that tries to charge you, and some hard-hitting close combat attacks against anyone who gets close enough, these guys allow your squad to fire on the move with greater accuracy:

Inceptors are a superb choice for Intercessor squads, offering you the ability to fall back and shoot as if you could also Fly. This means that should you get charged, you won’t suffer any reduction to your shooting output in the next turn. Nifty!

While Hellblasters don’t offer any special rules to your wider squad, they provide the majority of the damage for your mixed Primaris units with their deadly plasma weaponry.

It may seem a little ruthless, but Hellblasters also benefit considerably from having some bodies that cost fewer points in the squad to take some wounds, so you can absorb a bit of damage without losing too much offensive power in return.

Codex: Deathwatch takes a different approach, creating an army that’s focused around making the most of a small, elite pool of units, giving nearly every entry in the army the ability to tackle anything the 41st Millennium might throw at you.

From an increased list of units that can take advantage of the ever useful Special Issue Ammunition and Mission Tactics – a powerful ability for Infantry, Bikers and Dreadnoughts that turns your opponent’s over-specialisation against them – to mixed units of Primaris Space Marines and a dizzying array of Stratagems, you’ll find the Deathwatch codex rewarding whether you’re an existing collector or you’re looking to field one of Warhammer 40,000’s most elite armies for the first time.

Codex: Deathwatch brings Primaris Space Marines fully into the fold, allowing them, for the first time, access to Special Issue Ammunition. For those of you who don’t collect Deathwatch, this special rule allows bolt weapons to adjust their firing profile to suit their target – against tougher models, for instance, you’ll be able to use poisonous hellfire rounds, while units in cover can be dispatched with dragonfire bolts.

Auto bolt rifles, bolt carbines, stalker bolt rifles, standard bolt rifles and the absolvor bolt pistol can now be outfitted with this ammunition, making Intercessors a very powerful choice. Kraken bolts, for example, help compensate for the lower AP of the auto bolt rifle, while a Reiver’s heavy bolt pistol firing vengeance rounds would have an AP of -3!

There’s also a new kind of Special Issue Ammunition to play with – the tempest shell. Available in the form of a nifty Stratagem, appropriately named “Tempest Shells”, they’re ideal for chipping the last few wounds off a vehicle or making a dent in a tougher combatant – at the very least, they make your bolter-wielding units even more versatile. 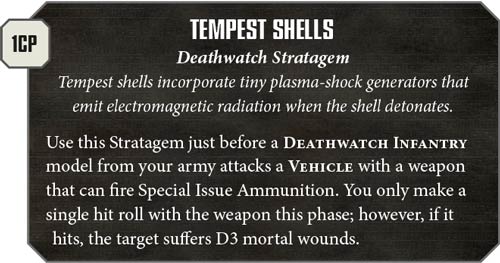 The Mission Tactics ability allows the Deathwatch to adjust their fighting style dependent on your opponent. At the start of the game, you’ll get to pick a Mission Tactic which corresponds to a Battlefield Role – Troops, Fast Attack, Elites, etc. – and your entire army will gain re-rolls of 1s to wound against that unit. Like Chapter Tactics, Mission Tactics applies to all your infantry, Bikers and Dreadnoughts, so you’ll be able to take advantage of a wide range of units. 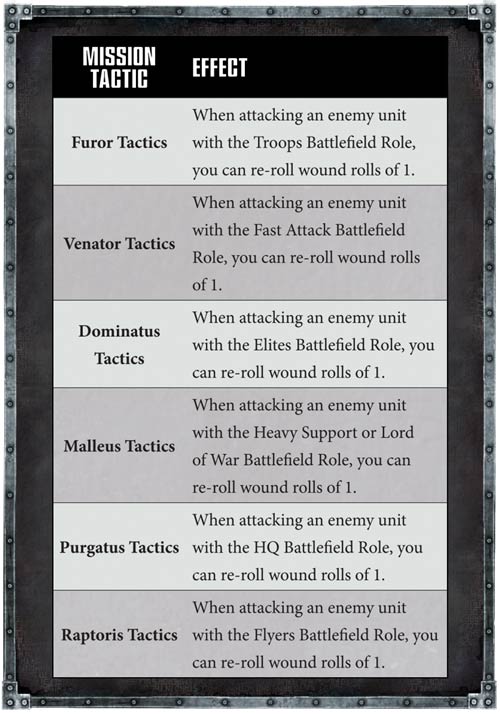 In practice, this allows you to really put the hurt on enemy armies focused around one kind of unit selection – but what if they’re using a more balanced list? There are no fewer than four ways to change your Mission Tactics mid-game, allowing you to shift your focus on the fly. The first of these is Adaptive Tactics:

For only 2 Command Points (down to 1 if you use a Watch Master), you’ll be able to provide powerful bonuses across your whole army – you could even use this Stratagem to change your Mission Tactics every turn. If you’d rather not spend Command Points, the Vigilance Incarnate Warlord Trait and The Tome of Ectoclades allow you to change or broaden your Mission Tactics for free. 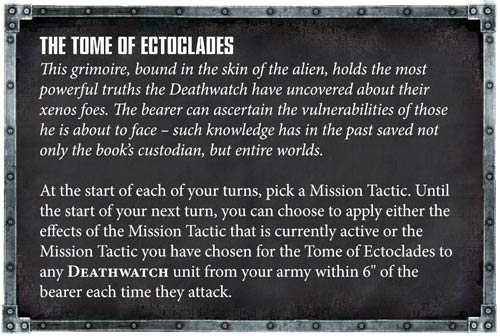 Combining Special Issue Ammunition and Mission Tactics gives the Deathwatch the ability to tackle any foe effectively. Seeing lots of high Toughness monsters? Use the Heavy Support Mission Tactic and wound them with hellfire rounds. Fighting a mass of heavy infantry, like Plague Marines? Choose Troops, then shred their armour with vengeance rounds.

We’ve not even got into the huge range of Stratagems you’ll have to choose from, or a powerful new Troops choice that lets you form a mixed Kill Team of Primaris Space Marines. Tune in later in the week when we take a closer look at the latter – or get started early and order yourself some Deathwatch Veterans.

END_OF_DOCUMENT_TOKEN_TO_BE_REPLACED