Someone and I don’t know who, went to the trouble to compile a bunch of data on the current Warhammer 40k 8th edition 40k meta. They took lists across the world from various sources using the largest events and came up with some fantastic data driven information.

The graphs below show only events with at least 20 players, taking the top 3/58ths of finishers from those events. The graphs shows the units being taken and by which armies, it is grouped by soups, so for instance all Imperium units are included in one graph. These graphs don’t tell you how many of each particular unit was spammed in any given list, it just marks if that list used at least one of them. The data runs from May 18 to August 18th, so these events happened after the Big FAQ, it also means the only new codex that was introduced during this time period was Imperial Knights.

You are going to need to double click some charts to see the details!

So the first chart is the Imperium Chart, as you will notice right away the top unit taken is the Infantry squad, which makes sense considering Imperial Guard dominance and being a cheap troop choice. Most of the top units taken are no surprise. HQ and Troop choices; things Brigades, Battalions and, Patrols require you to have. The first non-Troop HQ choice is the Heavy Support Team, another no brainer, considering the amount of Mortar teams we see. Out of the top 20 units 12 are Imperial Guard units, and if you dive deeper many of the remaining 8 are just units that fill in holes for Imperial Guard dominated soups. Sadly, you can also see just how pathetic a unit like the Tactical Marine is fairing, and basically any generic 3+ armour unit. Non HQ or Troop units have to offer either durability or board control to even be considered.

Next we have the Chaos chart. 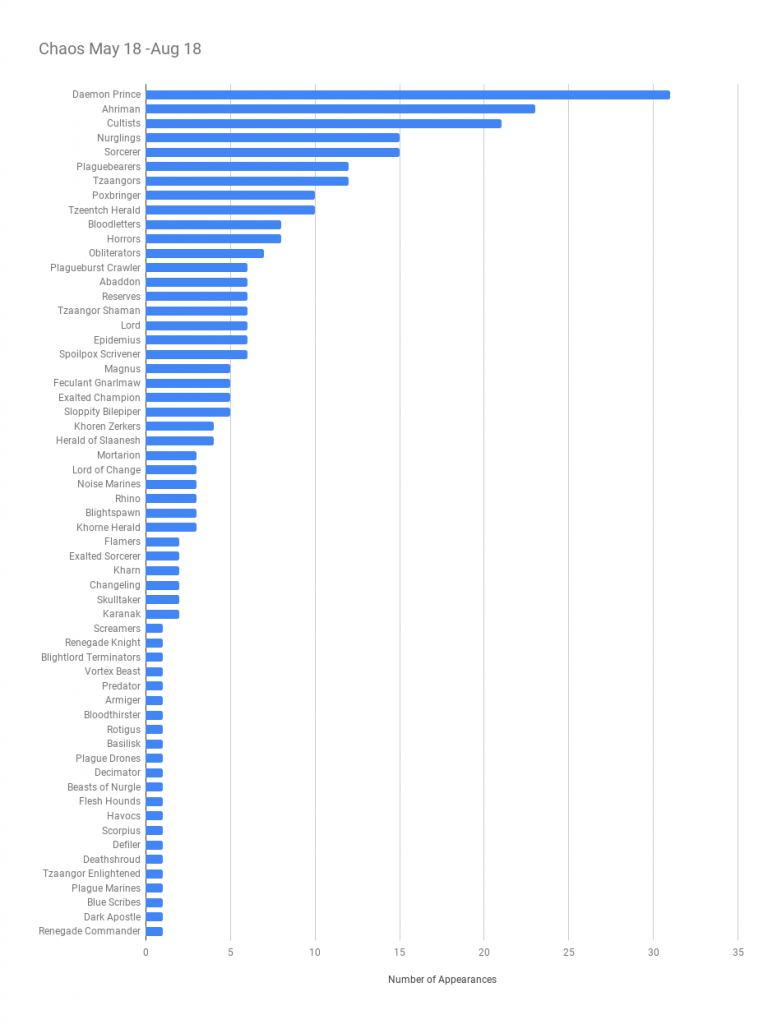 Here we find a bit of the same, but you can see how no matter the flavor all Chaos lists revolve around Psychic Characters with cheap large horde units to protect them. It isn’t until we get to Obliterators at number 12 that it isn’t a character or a cheap spamable Troop choice. What sticks out is Ahirman dominance on the list, taken almost 3x as much as Magnus and Mortarion combined.

Next chart is of the Eldar races. 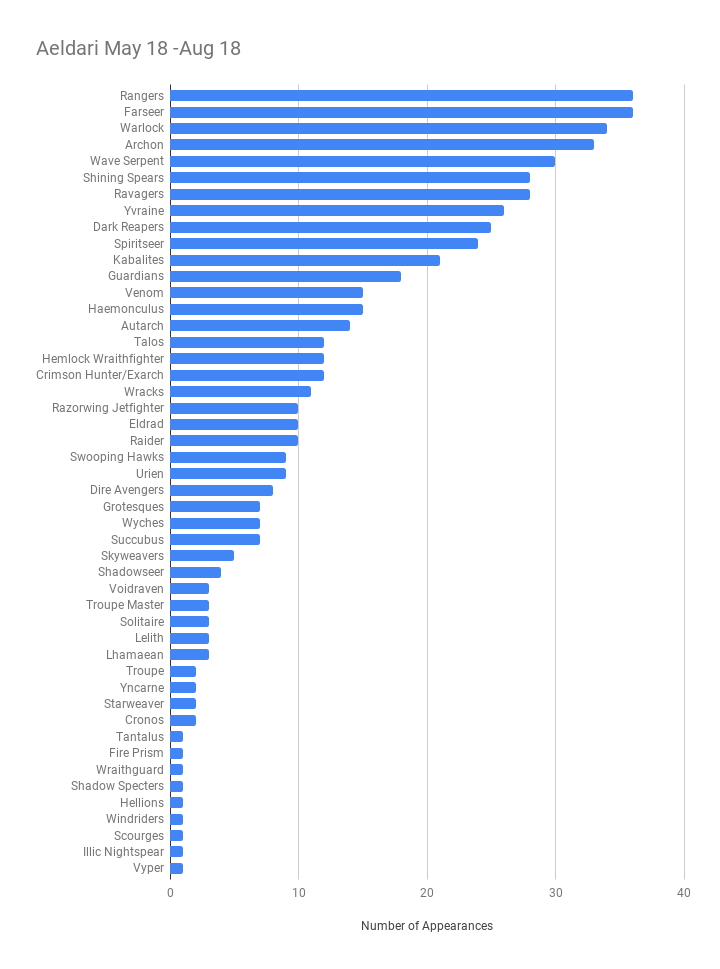 No surprises here as well, but strangely the variety across all Force Org choices is pretty good, this is because Eldar races don’t really have a fantastic Troop choice beyond Rangers, making it very important to take things like Shining Spears, Dark Reapers, and Ravagers. Of course once again Psychic HQs dominate.

The next set of charts is everything else and besides some of the same trends you find in the other charts, really show how hard it is to make an power army without cross codex options. Even the Tyranid chart is dragged down because, while you can take Genestealer Cult, you are hamstrung by pointless restrictions and still being stuck with an Index. 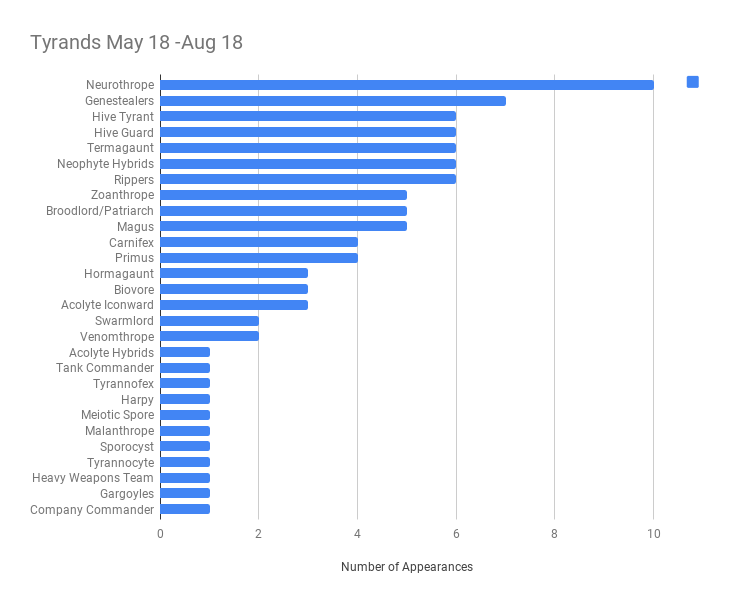 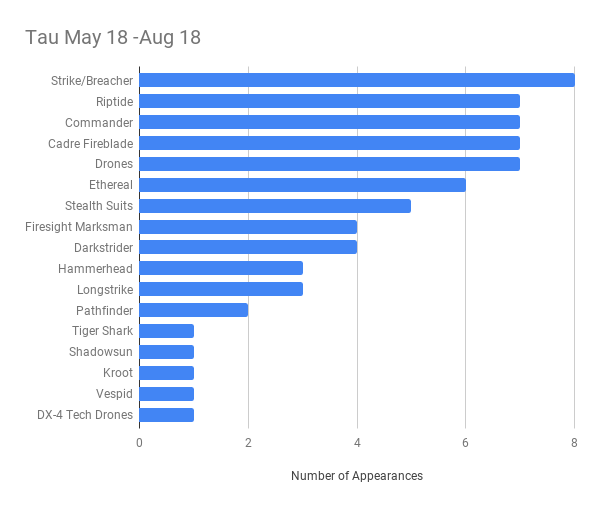 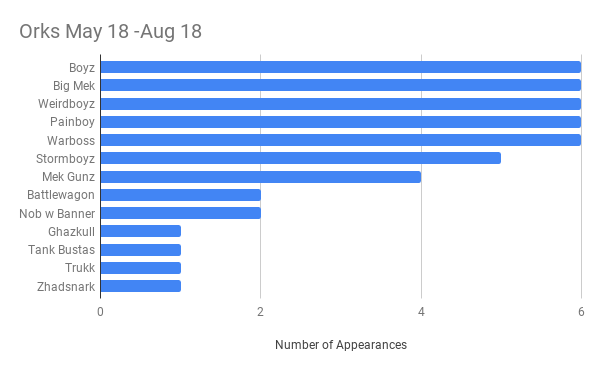 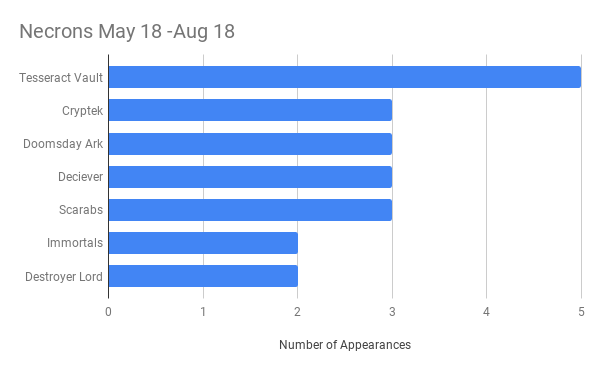 Even knowing that if we included events up to Labor Day we would the same things, but with some added Imperial Knights numbers. A simple conclusion is Soup armies have decisive advantages over mono faction lists. While Games Workshop tends to target specific units, data like this really shows the core problem with Soups. Since the Soups is a cash cow for Games Workshop we can’t expect them to just get rid of it, instead Games Workshop should focus on getting creative, by helping mono armies and builds.

One idea, is Games Workshop could add a “robust summoning mechanic” like in Sigmar, but have it completely tied to players taking entire armies that share the all same faction keywords. Another fix, is say units with 5+ armour/invulnerable saves treat all damage like mortal wounds, so for example a Lascannon can kill 6 guardsmen in one shot.

All I know is the current whack a mole approach to things by Games Workshop only pushes problems on to the next unit, list, or codex, and doesn’t help the core problems we are currently experiencing in 8th edition. Unless everyone is fine with little list diversification for matched play, because if that is the case everything is going quite swimmingly.

END_OF_DOCUMENT_TOKEN_TO_BE_REPLACED

In the Time of Covid, actual Warhammer 40k Tournament Results!

Thanks to Texas pandemic freedom fighters we have results from the first American GT in months at the Alamo GT!

END_OF_DOCUMENT_TOKEN_TO_BE_REPLACED

While we are all stuck in our homes, time to look at the ridiculous number for terrible deals you can avoid on eBay for Warhammer 40k models.