This coming weekend we will see one of the largest North American Warhammer 40k tournaments: the SoCal Open. We are assuming this will be a large event with organizers like Frontline Gaming. The SoCal Open is being held for the second year at the Del Mar Fairground in San Diego California right on the beach.

I will be making the trek to the SoCal Open to cover the Warhammer 40k championships of course. It will be interesting to see how much the meta has have evolved since the September Big FAQ. I expect to see Eldar dominate as the nerf bat of the FAQ didn’t hurt them that much, but I wouldn’t sleep on some sort of Imperial Soup to make it to the finals. Either way were are in this strange in between zone of FAQ, but not Chapter Approved, which I think will end up shaking things up more than anything heading into LVO next year.

The Socal Open has expanded as well, to include a few different 40k formats, Age of Sigmar, Shadespire, and various other games.

Regardless of the possible preordained outcomes, Blood of Kittens coverage can be found on Facebook Live, and updates to this post throughout the weekend. Also keep an eye out, for Frontline Gaming coverage which I hope will include Twitch casting the entire weekend as well! Coverage will also start a little later than normal because of my late arrival time.

Round 1 is underway, but before we got into some of the coverage there, here are a few lists by competitive players that peak my interest each for different reasons.

My favorite is Matt Evans’s Deathwatch List and Brandon Grant’s list will be a great case study in if the nerfs worked to fix Knights.

Nothing too exciting to report everyone who was expect to win won, but Matt Evans, sounds like his list was a little too cute for its own good. Anyway here is a better pallet cleanser of pretty armies! 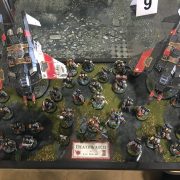 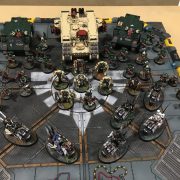 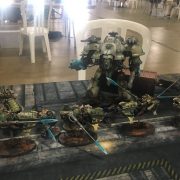 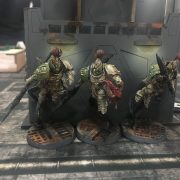 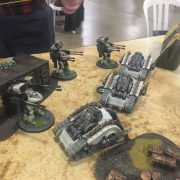 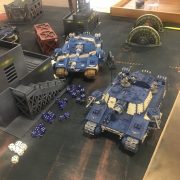 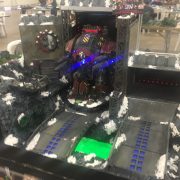 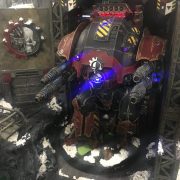 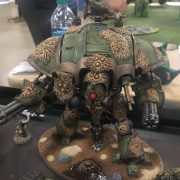 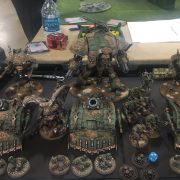 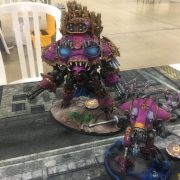 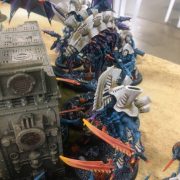 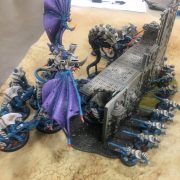 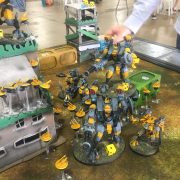 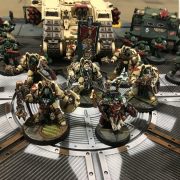 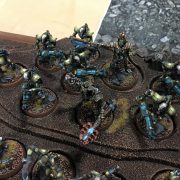 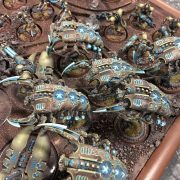 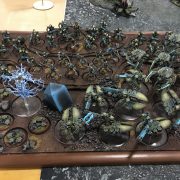 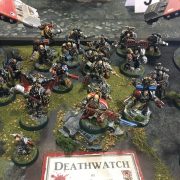 Of lists I said to be on the lookout for 4 out of 5 are still in it. Round 3 is also when we start to get some interesting matchup against interesting players. Here are two of my favorites.

This is a battle of can Brandon Grant actually beat a pretty nasty Eldar List.

One of my other random lists to look out fell in round 3 Don Hoosen against some lovely Chaos Space Marines.

This sets up some interesting match ups for round 4.

Here is a look at my picks fun matches this round between 3-0 players.

If you want pure old school players Nick Rose vs. Kenny Boucher will be on the top table.

If you want high generalship it will be Steven Pampreen vs. Matt Johansen

If you want the Orks last Index stand Julio Arreygue vs. Rich Kilton


Watching some great games in the mid top tables. Looks like we will have both Deathwatch and Tyranid player 4-0. The best though was a Nid player dead to rights against a 6 Eldar Flyer list and guess what he does? Oh yeah table everything else and keep genestealers locked in combat to not get shot at, that is what you do!

So looks like we got some serious games on our hands for Round 5.

Nick Rose vs. Brandon Grant for a fantastic top table with armies that do opposite things.

It was great seeing all Eldar Flyer heavy lists go down in Round 4. It now leaves us with Adam Gati’s strange Wraith Guard army and Matt Johansen Shining Spears/Reaper Eldar classic list. In not the usual suspect news we have Deathwatch and Tyranids still being undefeated. Also Orks are still in it with a tie game, a good send off for the Index.

So, I spoke too soon with Dark Angels it turns out Shining Spears are really good and can kill 1500 of Dark Angels by themselves with almost no other support. So with that, we have the final table set with…

OH I didn’t mention, but we do have an undefeated (1 Tie) Ork player still playing against an almost pure Dark Eldar army on table 3!

It wouldn’t be a Major Event without some rage quitting and attempts at fist fights. It seems that some people don’t like losing and throw a tantrum to bully the other player. This is what happen in a game between Nick Rose and Daniel Olivas!

Brandon Grant is the big winner of SoCal Open going undefeated! The same for Cooper with this Tyranids! In third place stopping Index Orks was Alex Aquila with his almost pure Dark Eldar army having only 1 tie!

END_OF_DOCUMENT_TOKEN_TO_BE_REPLACED

In the Time of Covid, actual Warhammer 40k Tournament Results!

Thanks to Texas pandemic freedom fighters we have results from the first American GT in months at the Alamo GT!

END_OF_DOCUMENT_TOKEN_TO_BE_REPLACED

While we are all stuck in our homes, time to look at the ridiculous number for terrible deals you can avoid on eBay for Warhammer 40k models.