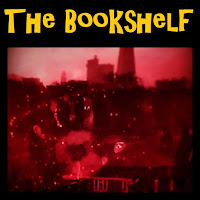 Welcome readers to another review. I've just found out about Young Justice, an American animation made by the Cartoon Network. It's sole purpose is to tell the tales of the younger heroes from the DC Universe. It seems like the team will grow over the coming episodes but they all have two things in common..1) They are teenagers and have teen angst. 2) They are viewed as Sidekicks, lessers to their older counter parts ie. Robin to Batman. 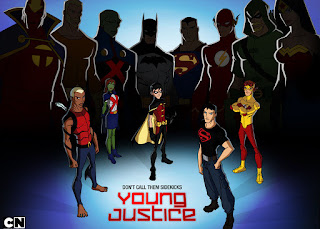 The series begins with a two part plot so I will write about both of them together in this post. The two episodes go by the titles 'Independence Day' and 'Fireworks', shown together as a hour long pilot on November 26, 2010 (Six years ago). With the show now over having lasted only two seasons I see no problems with posting spoilers, so you have been warned. As a plus side, the show has been picked up by Netflix (a.k.a how I'm seeing it) and there is even talks of them doing a season three!

Now back to the cartoon: 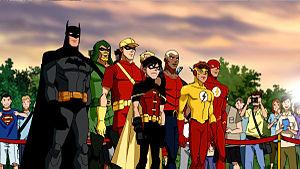 The opening few minutes introduces to us to the main Characters: Robin, Aqualad, Kid Flash and Speedy. Strangely all fighting Cold or Frost themed villains (Mr. Freeze, Killer Frost, Captain Cold and Icicle Jr.). We also find out that they are getting their first real visit to Justice Headquarters, located in Washington DC. It's here that things don't go to plan for the young heroes, as they are met with opposition from their Mentors (Batman, Aquaman, Flash and Green Arrow) about going out on JL missions. They are told this is just one step on the path to joining the league and must earn their place. This doesn't exactly go down well for our heroes especially Speedy, who voices his anger and resigns from being the Green Arrow's partner. Speedy then attempts to get the other young heroes to join him but they ultimately refuse.
Soon the JL are called into action leaving the young heroes all alone with the JL database. Robin hacks the system and the heroes attempt to prove their worth by secretly taking on a Justice League mission, to investigate the Cadmus building. Once on scene, it soon becomes apparent the Cadmus building isn't what it seems and within it walls is a secret underground laboratory. Cadmus are working on cloning lifeforms!
It's during this infiltration that the young heroes discover the real shocking truth; Superman has been cloned! As they attempt to release 'Superboy' they fail to realise he is under a form of mind control and Superboy ultimately captures them (Duh!). As in any good DC comic though, the seemingly villainous Superboy overcomes the mind controls and helps the young heroes escape.
We then get a action packed few minutes as the Heroes attempt an escape and face off against the villain Mark Desmond (who seems to be controlled by a shadowy group known only as 'The Light'). Seeing his research collapsing around him Desmond drinks one of his own formulas and becomes 'Blockbuster', a human/alien hybrid with a high pain threshold. Blockbuster is Ultimately defeated once the team learns to fight together (bonding). With Cadmus building now a collapsed ruin and the young heroes beaten up but triumphant, it isn't long before JL turns up to investigate. Here the big reveal happens as Superman discovers his clone. We are then treated to a huge amount of awkwardness before Superman flies off to deal with other issues (pretty heartless). 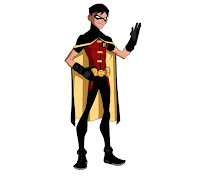 The episode then ends with Robin, Aqualad, Kid Flash and Superboy being organized into a new team by Batman. They seem to have a funky mountain base (I believe the old JL base) and now have some tutors to aid them, in the form of the 'Red Tornado' (never heard of) and the 'Black Canary'. Here the JL believe the teens can be trained and sent on missions to aid the JL outside of the media's focus. Kind of like a Black cell for the group. We also get to meet the Newest member of team; Miss. Martian. She is only in it for five seconds so we will talk about her another time.

Overall a great intro to a new show for me. I don't know much about DC apart from the movies, Arrow and Flash. So this is going to be a learning experience for me. But I am already hooked that's for sure. Who are The Light? Will Superman ever be not awkward? Is this Robin the one who becomes Nightwing. Too many questions I want answers too, so badly want to google it but must resist the urge!

Have you watched the series? What are your thoughts? Let me know by dropping a comment either on here or google+ and thanks for reading!
Instagram: @johnpepsday   Twitter: @JohnPepsDay   Google+: John Day