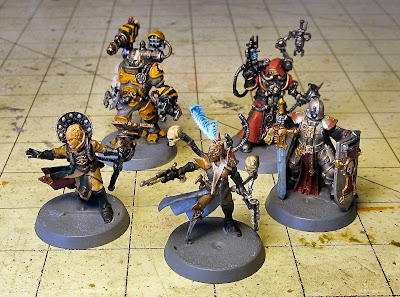 You can't have have a bunch  of new bad guys without some new good-ish guys. The four new PCs and their new friend add some nice variety to player choices. All are nice sculpts with great detail. Most went together with little issue, the Rogue Trader is a bit fiddly, and I was afraid I would break some parts, which I did not. 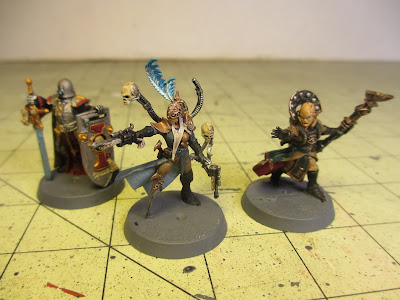 Aradia Madellan the Primaris Psyker is also in a great action pose, looking to go all Scanners on somebody.

The Crusader, Gotfret de Montbard, is a minor let down, being in a very similar pose to the old metal figures, still a great mini, I just would have liked to have had a new action pose. 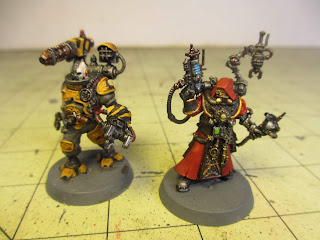 Of course we had to have a Mysterious AdMech Technoarcheologist, which is a great figure.

X-101, a combat Servitor, is a not a PC but a Retinue, new type of character controlled by the first player.

I just need to do some work on their bases and they will be on their way to certain death, I mean adventure!

We are going to finish up our current quest then deal in all the goodies from this set. Blackstone Fortress is a excellent game, and I am very happy to see it receive continued support.

Go Roll Some Dice
And Take Your New Friends Along