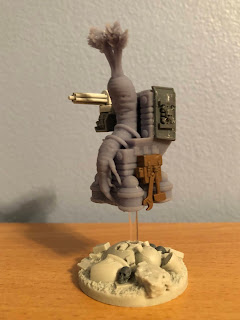 At some point this hover throne was occupied by a radical member of the Emperor's holy Inquisition. It is not unlike (though clearly a bit less sophisticated) than that utilized by the infamous Gideon Ravenor. Whilst the throne itself is neither fully armored like Ravenor's, nor as heavily armed (psycannons vs. a rotary stubber/bolter), it still was a potent symbol of Inquisitorial might. 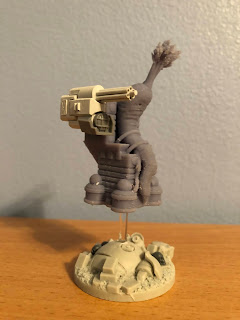 The base model was created by Ill Gotten Games, 3D printed under license by Alter3dimensya, the cannon is from Hasslefree Miniatures, the base is from Gydran Miniatures, and of course there are a few GW bitz used as well.

The name of it's original occupant has been removed from Imperial record, but what is known is that this deceased Inquisitor utilized a daemonhost which ultimately lead to his/her demise. With the binding wards failing, and their retinue of minions all slain, the Inquisitor in a fit of desperation tried to (and was ultimately successful in) binding the escaping daemon within the form of this rather large root vegetable (perhaps they were in a agricultural market, I dunno)!

However the process of the daemon's re-binding killed it's 'master' and this abominable daemonhost has taken control of the hover throne via it's incredible Beta (carotine?) level psychic powers. Still, as is evidenced by the tool kit strapped to the throne's side, it is suffering from the loss of proper Adeptus Mechanicus' maintenance, incantations and unguents. 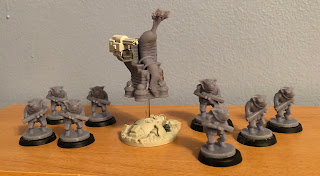 The Hired Swine are also from Ill Gotten Games and produced by Alter3dimensya.

To tend to both the throne's systems as well as all of it's other needs, the daemonhost has suborned a coterie of as yet uncontacted by the Imperium species of xenos which at least visually can best be described as 'Hired Swine'.

lol, this may never actually see table top use, but if they do I'll do my best to have them face off vs. Neverness who has a special love of off-brand models.