Welcome to the first part of my Space Marine Codex review for 9th edition. As expected, Marines lead the charge with one of the first codexes for the new edition of the game. This first part of my review will take a look at the Stratagems available to the army. 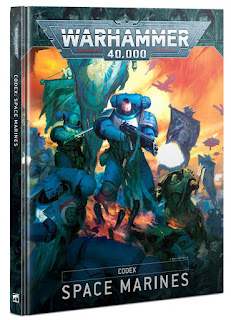 Stratagems
Space Marines have a plethora of great stratagems to choose from, stretching four pages in the new codex! This review will take a look at the first 17 stratagems on the first two pages.
Death to the Traitors (1CP)- When making melee attacks against a Heretic Astartes unit, you can re-roll the hit roll.
A decent bonus when you are playing against Chaos Space Marines. Situational, but I can see this coming in useful for my White Scars when coming up against Chaos.
Honour the Chapter (2CP)- Use at the end of the fight phase. An Assault Intercessor squad can fight again.
This stratagem dropped to 2CP, but got a serious reduction in power, allowing it to only be used on Assault Intercessors. No more attacking with your Thunder Hammer smash Captain again if you didn't manage to kill off your target the first time round. Again, could be useful for my White Scars, but I don't see it getting used too often. Nice to get the reduction to 2CP.
Fury of the First (1CP)- Add 1 to hit rolls for Terminator models in the shooting or fight phase.
Quite useful for negating the effects of power fists or Thunder Hammers in a Terminator squad in combat. Also great for hitting with your Bolters on a 2+. Could be useful if you are running Terminators in your army, who are a lot better with the extra wound and bonus to armour saves from Storm Shields.
Transhuman Physiology (1/2CP)- Primaris units only. Models in this unit can be wounded on a minimum of 4+ for a single phase. 1CP for a unit of 5 or fewer models, 2CP for units with 6 or more models.
Still a great stratagem, which got even cheaper for most of the units you are going to be using it on. It is now limited to only Primaris models, but these are pretty strong units in the codex anyway. A shame to not be using them on non-primaris characters any more.
Rapid Fire (2CP)- Allows an Intercessor Squad or Veteran Intercessor Squad to shoot again at the end of the shooting phase.
This gives you another round of shooting on a single unit in your army. Quite useful if you need to finish off a small enemy unit or do some more damage before charging in with your squad. Probably going to be situational, as it is expensive at 2CP, but could be very useful when trying to take a last wound off a character or unit. More likely to be used early on, when a unit is at full strength.

Gene-wrought Might (1CP)- Use in the fight phase on a Primaris unit. Unmodified hit rolls of 6 automatically wound.
A nice bonus when you come up against a tough enemy unit or vehicle. Gets better when you combine it with re-rolls to hit for when you need to go fishing for 6's. Again, pretty strong on the White Scars when the Assault Doctrine is active.
Unyielding in the face of the foe (1CP)- Use when a Mk X Gravis unit is selected as the target of an attack. For attacks with a damage characteristic of 1, add 1 to your saving throws.
Great for boosting the durability of Gravis units in the army. As they are probably toughness 5, going up to a 2+ armour save against small arms fire will be great for keeping them alive. Will make Gravis units (such as the new Heavy Intercessors) great for holding objectives, as they will be really hard to shift from them.
Only in Death does Duty end (2CP)- When a character is killed in the fight phase, they may attack in melee. Cannot be used if the character has already fought in that phase.
Another "fight again" stratagem that has been reduced in power. It can now only be used if the character has not fought already. Great for when your character is slain in combat before they get a chance to strike, particularly as they can now be targeted when they have heroicially intervened. Still a useful stratagem, but no more double fighting with a character in combat.
Armour of Contempt (1CP)- Gives a vehicle a 5+ save against mortal wounds for a phase.
Situational, but could be useful if you come up against a psyker-heavy army that will be smiting one of your vehicles, or against shooting attacks that can deal mortal wounds.
Power of the Machine Spirit (2CP)- Use in the command phase. One vehicle with a Machine Spirit is considered to have full wounds remaining until your next command phase for which profile to use.
A pretty useful stratagem for getting the most out of your firepower for a Machine Spirit unit (Land Raider, Stormraven or Repulsor), however, at 2CP it is pretty expensive.
Wisdom of the Ancients (1CP)- Use on a Dreadnought model. It gains either the Captain re-rolls or Lieutenant re-rolls for Core units within 6".
This stratagem got better, allowing you to choose either re-rolls of 1s to hit or to wound, giving you more tactical mileage out of your Dreadnoughts. As Dreads have gotten tougher to kill and can fire more effectively on the move, they can now be a great support unit for your infantry on the move.
Commanding Oratory (2CP)- Allows a Chaplain to recite a litany (that has not be recited already) automatically in any phase.
This is a fantastic stratagem for Chaplains. It allows you to automatically use a litany, so takes the risk of not rolling high enough out of the equation for when you really need the ability to work. Not only that, but you can choose to activate a litany in any phase you wish, not just the command phase. This is important for Chaplains that start the turn in reserve or in a transport vehicle, allowing you to deploy/disembark and still use your litany. This is a very powerful stratagem, and I can see a lot of use for it in my White Scars. Getting +2 to charge off reliably for units in reserve is a great boost for the combat ability of a force.
This is even better when combined with a Master of Sanctity, as the stratagem only costs 1CP. If you are taking a Chaplain, you will probably always upgrade, as you can use this stratagem for fewer CP, as well as getting the litany off on a 2+.

Combat Revival (1CP)- Allows an Apothecary model to bring a model in an Infantry or Biker unit back with full wounds.
Again, a great stratagem. I always found the Apothecary revival roll to be a bit unreliable (it never seemed to go off!), so moving to a stratagem is great and guarantees that it works. Not only that, but the model comes back with full wounds, instead of on a single wound.
Once more, taking the Chief Apothecary upgrade allows you to use this stratagem for free, allowing you to revive a model each turn. Totally worth the upgrade.
Relics of the Chapter (1CP)- Allows you to give a Character model a relic. Can only be used twice in a standard Strike Force game.
Allows you to take up to 3 Relics in a standard army. Marines have access to some great Relics, so this is a stratagem that is probably going to get a lot of use.
Hero of the Chapter (1CP)- Allows you to give a Character model a warlord trait. Can only be used twice in a standard game.
Again, great for Marines as they have access to some great warlord traits. The Chapter Command warlord traits in particular are very useful, so I can see you using this for a couple of those in a game, particularly the one that gives you an extra CP on a 4+ at the start of each of your command phases.
Hit and Run Warfare (1CP)- A Biker, Land Speeder or Storm Speeder unit can fall back and shoot.
A very useful stratagem if you are running Bikes or Land Speeders. Very useful for the White Scars, allowing you to fall back and still shoot and charge with your Bikers. Also useful on the Ravening to stop the units from being tied up in combat and still being able to bring their firepower to bear.
Hammer of Wrath (1CP)- Use on a Jump Pack unit after it finishes a charge move. Select one enemy unit within engagement range and roll a D6 for each Jump pack model in engagement range. If the roll exceeds or equals the enemy model's toughness, they suffer a mortal wound.
This stratagem has got much, much better. than before. It used to be a mortal wound on a 5+, but now you need to beat the toughness. This means you will do a mortal wound on a 4+ against most infantry, or a 3+ against weaker forces such as Guardsmen or Aeldari. Now that Marines have gone up to 2 wounds each, units such as Assault Squads or Vanguard Veterans are more viable, so I can see more use for this stratagem.
Overall
As you can see, Marines still have access to some fantastic stratagems. Some have been diminished in power a bit, as they were too frequently used and very powerful. However, the addition of some like Commanding Oratory and Combat Revival are fantastic, especially when combined with some of the Chapter Command upgrades.
The next part of the review will look at the remaining stratagems.