When I saw the previews for this week’s preorders I was happy to see how fast Games Workshop getting 9th edition rules out, but something that will likely have a greater impact on Warhammer 40k 9th edition was the introduction of new starter sets called Combat Patrol. The assumption is these Combat Patrol boxes give players a new way to save on models if otherwise purchased individually. Combat Patrol boxes look very similar to the wildly successful Start Collecting! sets we have had for the last five years, unfortunately we found out this week as well that Combat Patrol will replacing them. As new 9th edition codexes are released we can expect according to Games Workshop new Combat Patrols for each faction.

Officially we don’t know how much these new box sets will cost, but thanks to the Internet we have a pretty solid idea. Below is all the prices for the releases coming this weekend. 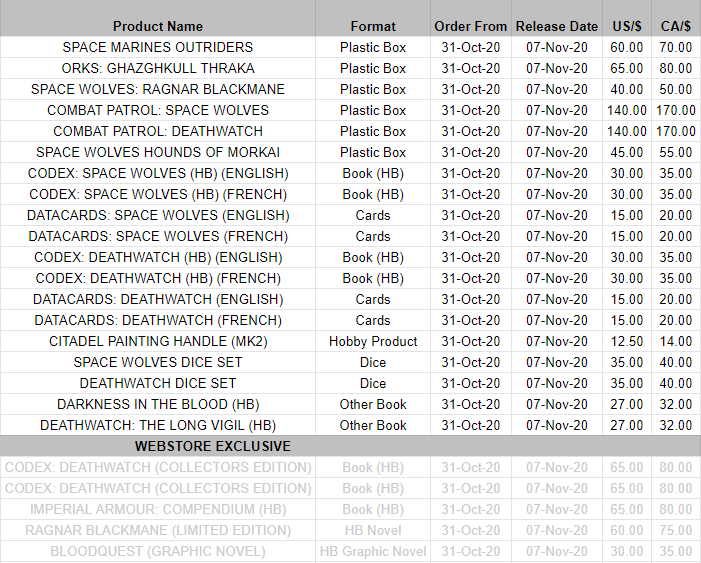 As you can see the sticker price for these new Combat Patrol boxes are a quite shocking at $140.00!?!

Now, these new Combat Patrol boxes do save you around 25-30%, but not the same as the 35-40% you typically saved with Start Collecting. Games Workshop while adding an additional kit to each of these new starter boxes, most likely doesn’t justify the $45 price increase. In marketing, simple concepts like getting products under $100 have a large measurable psychological effect on product purchases. When a new player enters a Warhammer shop, especially when a parent controls the purse strings, they will wonder why paying $140 for Combat Patrol is a better value than the $95 box, not knowing the exact minutiae what is being saved.

By raising the entry level, you are really throwing another roadblock to getting new players. This is also discouraging for veteran players looking for deals, especially like with the Death Watch Combat Patrol the $140 is based off adding an just an extra character or a upgrade sprue. This really makes it hard to justify ever buying more than 1 of these boxes, when you typically only need one of these kinds of HQs. Since most new players will only buy 1 box, Games Workshop is really limiting the protentional here. It is also the difference between spending around $200 and $400 for 2 boxes.

Everything about Combat Patrol screams greed, as whatever discount is certainly based on specific margins on certain kits found in those boxes, and not what makes sense for building that particular army. This combined with over pricing kits like the new Necron Warriors without making them multi-part kits, is a sign of Games Workshop being lazy besides just thirty for the coin. I am also curious on what marketing and sales techniques they are teaching Store Managers at this point? I guess the idea is to give players a clear onramp to 50 power level, but getting the first bite into the hobby is always the hardest.

Since we are still in a global pandemic what exactly is the end game here as well? This could be one of the leanest times for disposable income for a few years. Since most players won’t have the ability to regularly play the game, what value is there in buy these new starter sets, when you have a mountain of models collecting dust that need still painting? Then you have the massive amount of competition from other forms of entertainment, that are more conducive to our new Zoom reality. Dungeons & Dragons and more importantly the next gen game consoles are way more accessible than Games Workshop products and pose a direct threat the longer we are unable to play games with friends, at stores, or in tournaments.

I think we closing in on new level of greed we have not seen from Games Workshop in a long time, this time though they at least have a competent marking team, that can convince gamers the “deal” they are getting is the best they can ever hope to expect.