Time for another leak and rumor compilation, this time we have Warhammer 40k Dark Angels 9th edition codex / supplement, rumors, leaks, previews. As with the other compilations the A running compilation of rumors, leaks, sneak peaks for Dark Angels 9th edition codex / supplement. With new rules, point adjustments, stratagems and units. Compilation will feature both Games Workshop community info and any Internet leaks and rumors as they come!

Check back everyday as new leaks and rumors for Warhammer 40k Dark Angels 9th edition codex will be added, without notification.

Much like the bike squads of their Ravenwing brothers that we covered yesterday, many different kinds of Terminator Squads in a 1st Company Detachment will be able to contest objectives just as well as your regular, squishier troops. 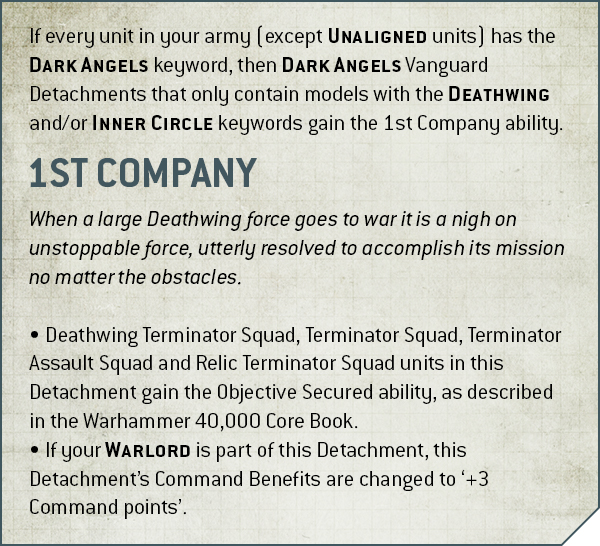 Unlike their 2nd Company comrades, however, the Deathwing also includes many Space Marines and Vehicles outside of the 1st Company. While before you were able to induct certain members of your army into the Inner Circle by paying command points, now it merely costs a handful of points to unlock all of those wonderful Deathwing benefits.* 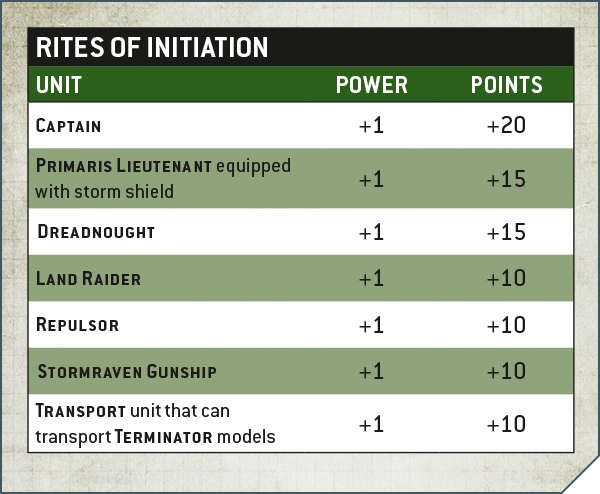 The massed use of Terminators is a hallmark of the Deathwing’s attack strategies. They plunge heavily armed and armoured veterans deep into the heart of the enemy’s command structure, often wiping out their leaders before the rank and file even know they’re under attack. This sudden, furious barrage is represented by the infamous Deathwing Assault Stratagem. 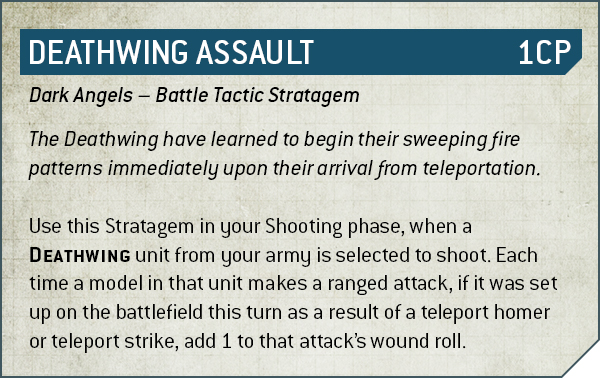 With a bonus to wound when arriving from Teleport Strike, their initial blistering assault is even more likely to bring down the toughest targets before they know what’s hit them. Vehicles, Monsters, and more will fall in front of you easier than ever.

Speaking of Stratagems, we’ve got one more to show you.

None embody the veiled nobility of the First Legion more than the Deathwing Knights, elite among the elite who strive to emulate the valiant knights of old Caliban. Carrying ancient relic maces and storm shields, they teleport into the thickest fighting to smash aside the strongest foes their Chapter might face, unflinching in their desire to display the martial excellence their Primarch was famed for.

The 2nd Company of the Dark Angels, known as the Ravenwing, are masters of the art of rapid assault, tearing across the battlefields of the 41st Millennium astride their jet-black vehicles. Like a flash of lightning before a thunderstorm, they form the vanguard of the First Legion’s many battle plans, carrying out vital reconnaissance and securing key objectives before the enemy has time to react.

They wouldn’t be much good at their job without the ability to contest those objectives they so quickly approach, however. Thankfully, your bikers can now take advantage of the new 2nd Company rule. 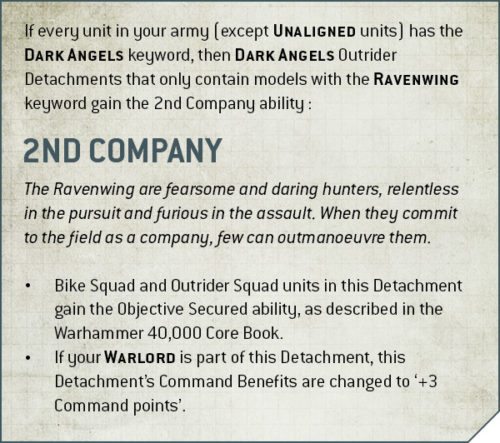 Not only does this allow for a thematic detachment of bike specialists to accompany your main Dark Angels force, but it also paves the way for the return of classic Ravenwing armies featuring nothing but bikes, speeders, and aircraft.*

While all initiates into the Ravenwing display preternatural skills with their bikes, the most valiant and dedicated survive to be inducted into the Inner Circle and join the ranks of the Black Knights. Only then are they entrusted with the truth of the 2nd Company’s secret mission: tracking and hunting the cursed Fallen.

We mentioned in our previous look at some of the Dark Angel’s new rules that Fire Discipline was only one part of the Sons of the Lion ability. That’s because the bikers and pilots of the Ravenwing aren’t about to be left out just because they refuse to walk. In a first for a Space Marine Chapter, their special bonus to the Combat Doctrines ability is split into three parts that take effect in different turns. 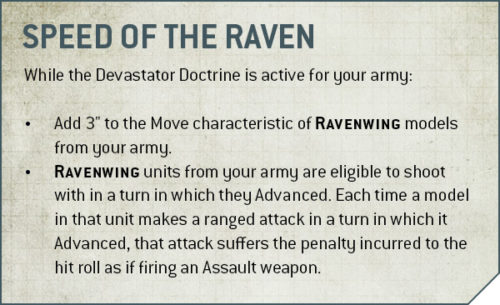 With Devastator Doctrine active in the first turn, your dark huntsmen will be rocketing across the battlefield to put that new-found Objective Secured to good use. Best of all, they won’t be prevented from shooting when they Advance, so get those nice shiny Onslaught Gatling Cannons on your Invader ATVs ready.

Finally, it wouldn’t be a new codex supplement without some fresh, shiny Stratagems for you to employ. If you made the incredible guess that the Ravenwing will have a way to move even faster, congratulations. The Librarius would like a word… 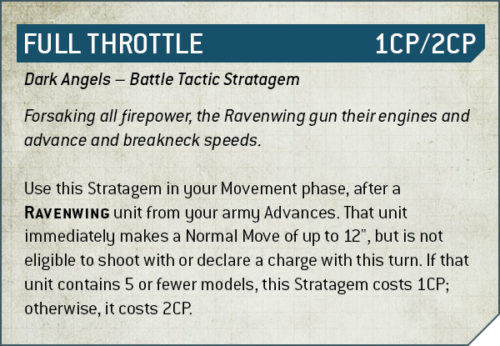 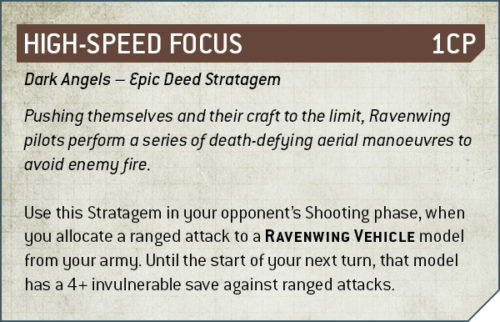 Fans of the classic Jink rule will be happy to know that it’s still alive and well among the 2nd Company’s forces, but if you can’t afford to Advance for that delicious 4+ invulnerable save it’s good to know High-Speed Focus has your back in a pinch. Trust the master movers of the Ravenwing to dodge enemy fire even when they’re standing still.

To aid their Interrogator-Chaplains in ripping secrets from the brains of their enemies, Librarians of the Dark Angels tap into their own mind-warping variety of psychic power to assault, distract, and befuddle. This means you’ll have a newly improved arsenal of psychic abilities to choose from when selecting your forces, so we’re going to give you a sneaky preview of a couple of our absolute favourites. 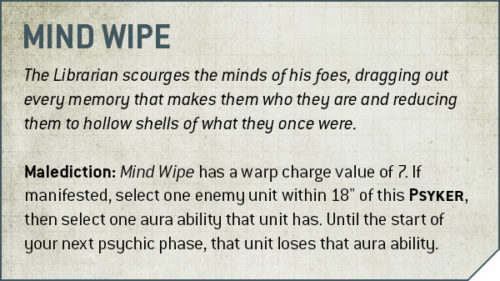 For many, powerful aura abilities are a cornerstone of their army and allow even the most mundane of troops to perform above and beyond their limits. Being able to shut down those abilities at will is a powerful tool for any Librarian looking to give their own forces a leg up over their opponent, and it’s especially deadly in the hands of Master Interromancer Ezekiel who casts it easier than anyone else.

While many Psykers are content to use their mind-altering powers to merely shake the morale of their opponents, the master mental manipulators of the Dark Angels are able to shape their enemies’ fears into far more debilitating forms. 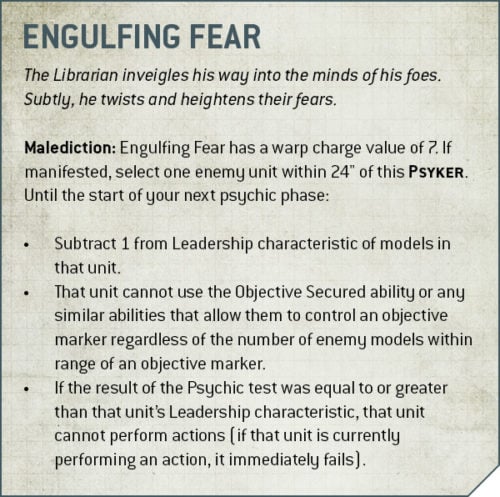 Taking objectives and performing actions is important for many mission types. For those times when the enemy cannot be allowed to score crucial victory points, a Librarian can wipe a unit of their Objective Secured rule or even prevent them from taking actions entirely. Perfect for elbowing into an important objective at a critical time.

Relics of the Rock

Ancient relics of the Chapter are stored within the deep vaults of the Rock, available to the First Legion’s greatest champions in times of war. Those who are particularly fond of bludgeoning their enemies with heavy, blunt objects will be glad to know a Relic has been requisitioned just for them. The Mace of Redemption is particularly good for piling on the mortal wounds, especially if you have a Librarian on hand to help you re-roll wound rolls. 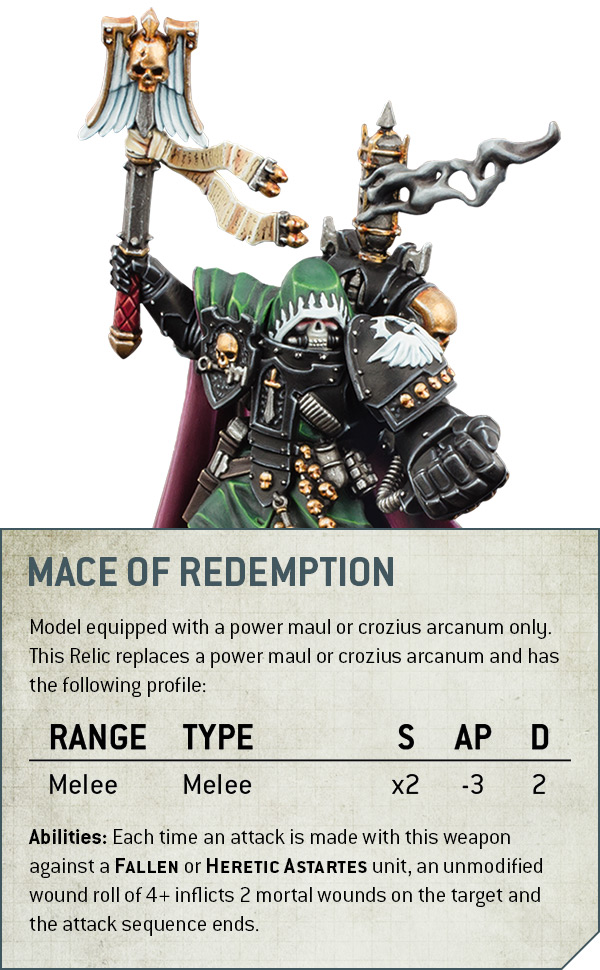 Even Ravenwing Talonmasters in their specialised Land Speeders might want to give something a cheeky poke once in a while, so it’s a good job the Heavenfall blade can be taken by them, even though this unit is classed as a vehicle. With plenty of Wounds on hand to soak up damage, equipping the Talonmaster with an upgraded power sword makes it a fearsome close combat Character indeed. 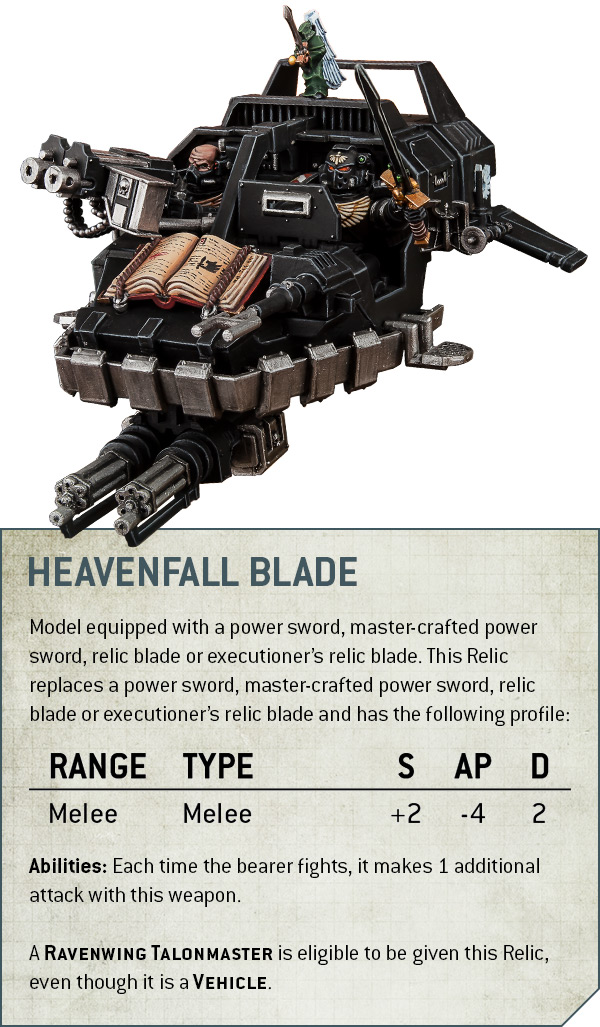 Stratagems of the First

The new codex supplement has 17 stratagems for the Dark Angels and their successors to use, making it a difficult proposition to choose just one or two to show you. Alas, as Master Interrogator-Chaplain Asmodai himself said, “There is no salvation without suffering”, so we present to you a carefully selected couple to tantalise your tactical minds. 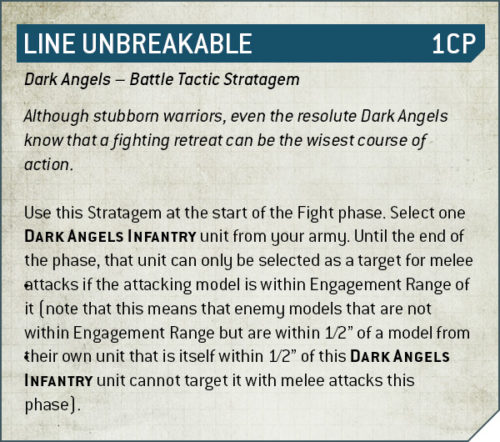 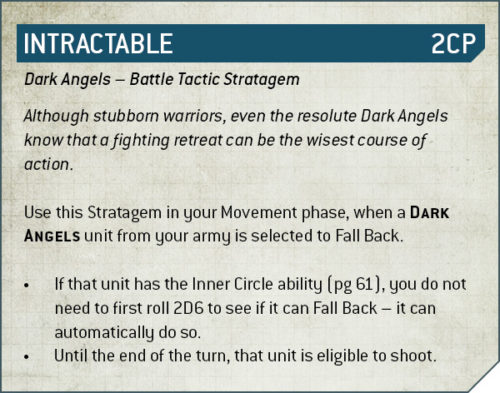 Befitting their fame as stalwart (some would say stubborn) defenders and cool-headed combatants at close range, the Dark Angels have a duo of Stratagems ideally suited to confronting large mobs of enemy troops.

Line Unbreakable allows them to blunt the force of a massed assault, permitting only the front line of fighters to take a swing. For enemies that rely on numbers and sheer volume of attacks to wear down the Emperor’s finest, it’s sure to cause quite a pause.

Once the attack has been stymied, the old favourite Intractable returns to create much-needed space between the baying hordes of enemy monstrosities and the First Legion’s boltgun barrels.

But what if there’s nowhere to retreat to or your Marines are hotly contesting a vital objective and can’t afford to move? In the maelstrom of close-quarters combat, none are as adept at leveraging their firepower as the Dark Angels. 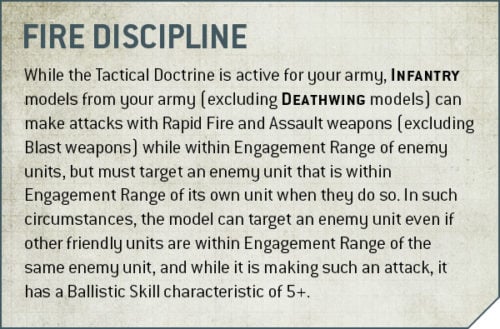 As one part of the new doctrine ability Sons of the Lion, Fire Discipline allows your units armed with Rapid Fire and Assault weapons to shoot even if they’re engaged in close combat, almost as if those weapons were pistols. With a veritable storm of fire ready to greet those that choose to engage them in a melee brawl, your foes will be forgiven for wanting to keep the Dark Angels at arm’s length.