Well, well, we have hit the one year anniversary for the 9th edition Necrons  codex, (give or take a few weeks) which means we won’t see another Necron codex until 10th edition drops, in the meantime let us take a look at state of the codex one year after its release.

The Necrons codex release should have been a bigger deal, thanks to the revelation and release of the Silent King, but a stupid pandemic had many people distracted. The balls of Games Workshop to bring the Silent King to the forefront and reintroduce a new big bad to the current setting, shouldn’t go understated. It meant the 9th edition Necron codex was always going to be a tall order to fill, and as a result for the most part the codex falls flat.

Well before dive right into a nest of bad news, let us take a quick overview of what is inside the codex itself. 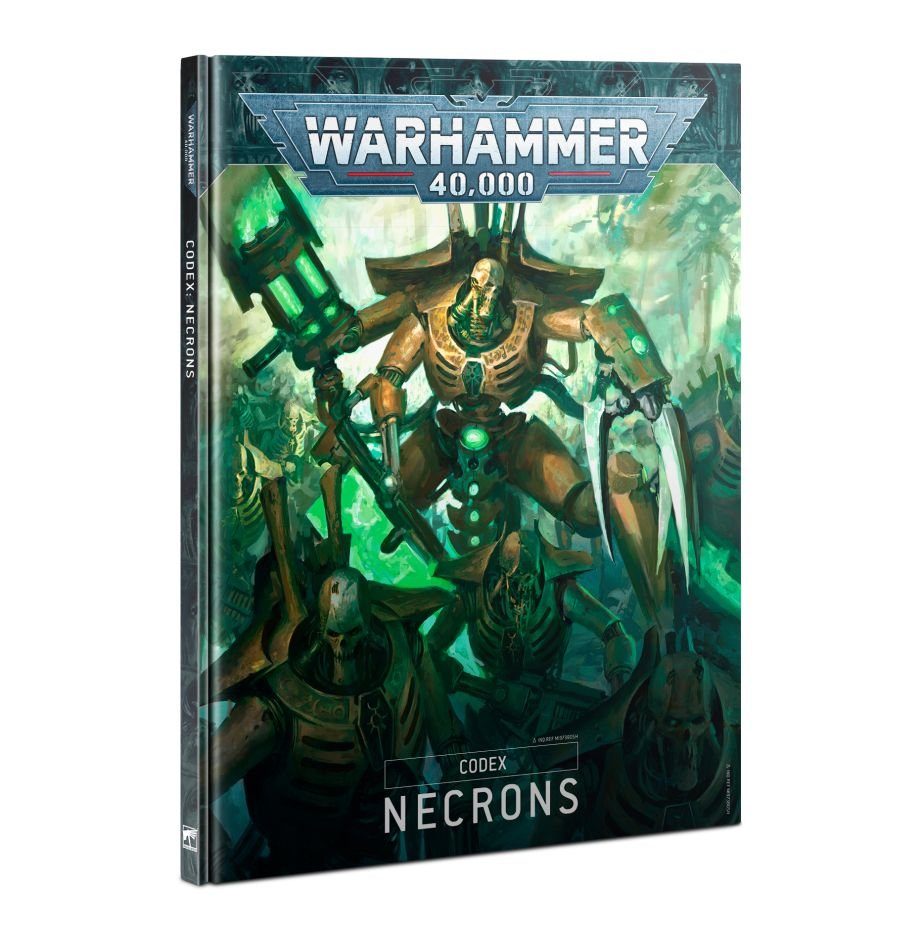 The Necrons 9th edition codex comes in at, 120 pages, which oddly enough the same number of pages you can find in the Necrons 8th edition codex. Like the Space Marine 9th edition codex, the Necron codex is fantastically laid out with a easy to navigate format. Only losing a bit on the model shot front, while a focus is instead given to tons of new rules.

The lore section is as you can imagine, all about the return of the Silent King with many of the stories and histories focused on his influence and return to the galaxy. It is the Silent King relation to that current moment in 9th edition lore, that shines throughout, making his reintroduction that much more important, even when it seems Games Workshop quickly moves on to the next big thing months later.

GW keeps things simple with a glossary and page references for rules in the book. We also find a ton of great new Necron art, that showcases many of the new and updated models released for this army. The fun as always galactic map makes an appearance showing the expansion of the Necron dynasties across the galaxy. The showcase section unsurprisingly shows off the latest model releases, with very few images outside the new models, and really doesn’t offer anything in the way of tips or information for what you are seeing.

It is the Silent King relation to this current moment in 9th edition lore, that shines throughout, making his reintroduction that much more important, even when Games Workshop moves on the next big thing.

The rules and datasheets are presented just like the Space Marine Codex, with the Crusade rules again awkwardly placed right in the middle. The graphic use of black pages is also a nice touch breaking up codex into navigable sections, with haunting Necron images trying to break through the pages. 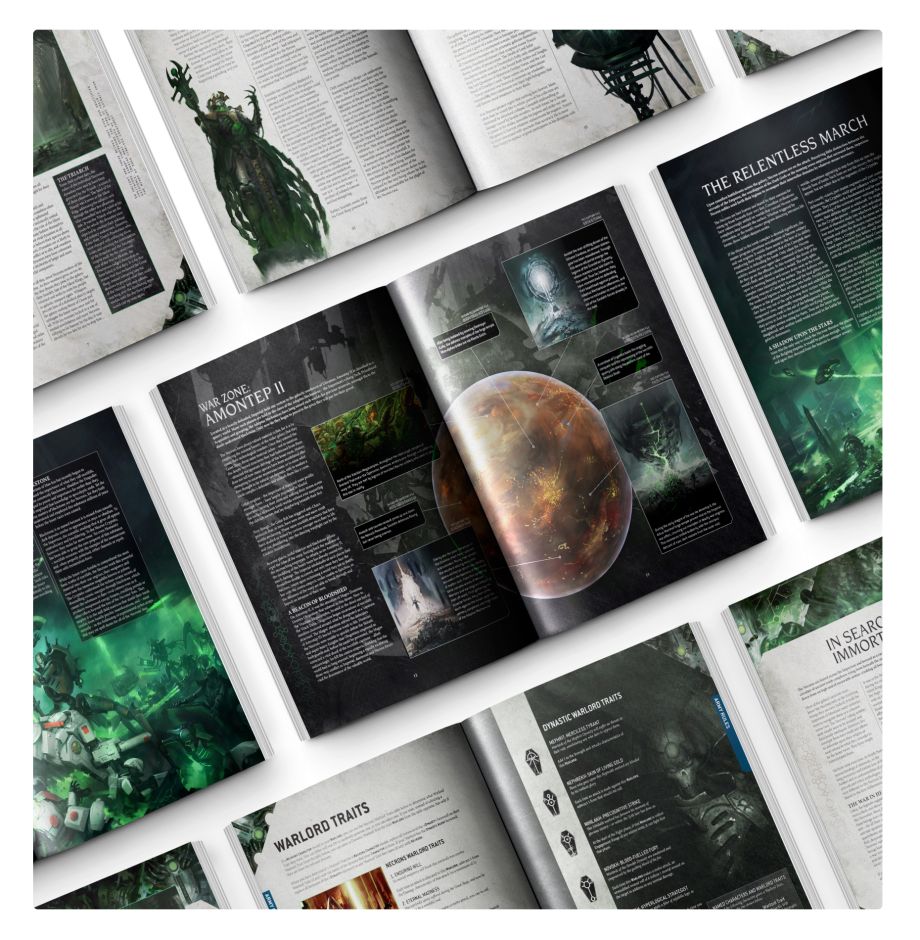 What if we lived in a Vacuum?

Seeing the previews for the Necrons 9th edition codex at the time, people were pretty mixed on what to expect from the codex, with much of the debate focused on how reanimation protocols would work and if they stood a chance against the all the new and seemly over powered toys the Space Marines had gotten. This trepidation wasn’t without merit, as it became clear even on release some things just didn’t feel right with the Necron codex.

This isn’t to say that Games Workshop didn’t get other things right with the Necrons 9th edition codex, the Reanimation Protocols ended up as just the right balance, between Feel No Pain and its own thing. The Stratagems feel right representing the best of the 8th edition codex, with some new additions to reflect the new models and path Games Workshop took with 9th edition. Where things fell flat though was underwhelming Cryptek Arkana, especially when compared to the Chapter Command of the Space Marines. Games Workshop has this habit of unduly burdening anything not Space Marine and this is clear from the Cryptek Arkana, adding way too many one time use conditions and keyword restrictions to these upgrades.

The secondary objectives are very lackluster either being too hard, easy for your opponent to counter, or basically the same as other better secondary objectives. Then we have the datasheets, which are only just fine, but didn’t create any wow moments, and as we will discuss later the lack of Core keyword on certain units would dog the Necron faction until a only recently. What the Necron 9th edition codex does get right, is C’tan and their powers, which players saw this right away, when we had Nightbringer paranoia gripping the community for a hot minute.

This trepidation wasn’t without merit, as it became clear even on release some things just didn’t feel right with the Necron codex.

Since most units just seemed fine, the Necrons really didn’t grab much attention beyond the Nightbringer and the Silent King. Games Workshop to its credit I guess didn’t go overboard and create a imbalanced Codex right out the gates for 9th edition, but by no doing really anything, it meant the codex would be quickly forgotten once codex creep started to take its hold.

How is it holding up currently?

The Necron Codex 9th edition is a case of being released too early in the edition, as the army rules quickly became terrible within six months, minus a specific Silent King build, Necron competitive lists were pretty unplayable during that time. One of the main reasons for this, beyond weak secondaries and bland unit choices, was the exclusion of the CORE Keyword from the majority of units in the book. This contrast with Space Marines was quite glaring, and as more and more codexes were released it became clear that the Necrons were the odd CORE man out.

Without CORE on so many units, the basic HQ auras and buffs became very limited. It explain why most good lists from Necrons featured tons of Warriors, as they were the best unit to get these benefits. Worse, dead on arrive was the terrible execution of the Command Protocol. Not only are they not that powerful, but the Game Designers went out of the way to make them really hard to use. Unlike Space Marines doctrines they don’t just happen, but instead require Noble units to be within a certain range to work. This was a cool concept that completely falls flat because of how hard and unpredictable it is to be effective.

Thankfully, at least on the CORE front Games Workshop has fixed this problem with the a FAQ, but this doesn’t change the poor design choice at the start. The current state of the game at the end of 2021, we just don’t know if this change will be enough. It certainly does make Necrons more interesting, but I suspect not much change for this faction until the 10th edition book is released or a random supplement.

Dead on arrive was the terrible execution of the Command Protocol rules.

The Necron 9th edition codex has also painted itself into a corner, as the basic power level of the most units isn’t enough to help the army compete, and not even aggressive point reductions can change that.

The Necron 9th edition codex, for all its faults, is a fantastic way for any new player to get into the hobby if they are not trying to go straight for the competitive juggler. With the exception of the Command Protocols the rules are simple and easy to pick up, the army is durable and won’t be tabled on turn one. Reanimation is a fun mechanic, and being able to cackle like a mad robot with a few good rolls never loses its joy. It is also one of the few armies where all you need is just the codex to play, as long as you write in the units that now have CORE in the margins.

END_OF_DOCUMENT_TOKEN_TO_BE_REPLACED

Top army lists from the 7 large ITC Warhammer 40k Tournaments from the past weekend, and two weeks before the Las Vegas Open 2023