Watching stocks over the short-term is often an experiment in futility; on July 1st 2019 we looked back at the state of Games Workshop’s stock and financial health, today we do the same…

July was a mostly quiet month for global markets, with the only big news relating to Games Workshop was the selection of Boris Johnson as Prime Minister, and the effects it will on Brexit coming for real this time on Halloween. July also saw the official release of the full Annual Report, which gives the fine details on how Game Workshop is doing, even as the topline headline had been released months earlier.

So with that backdrop how did Games Workshop do for the month of July 2019? 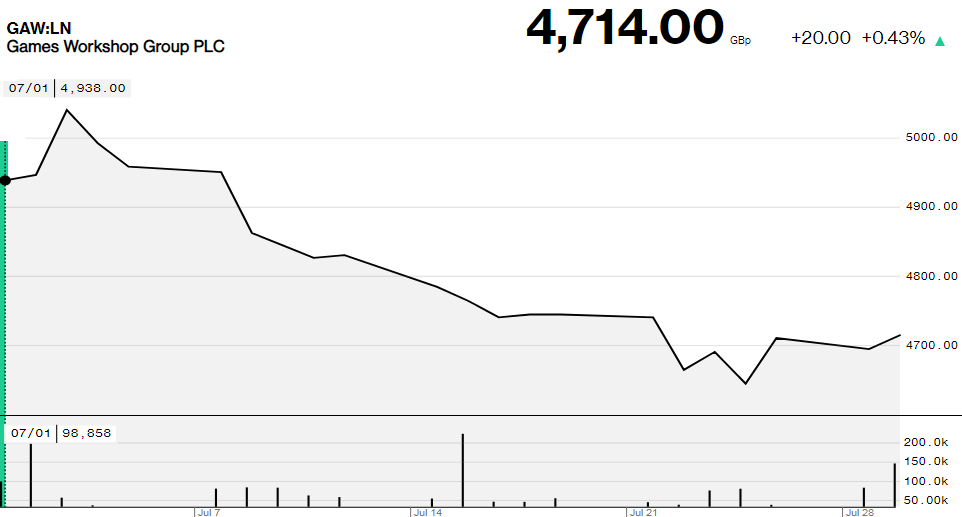 The stock was down for the first month of the year, by almost 200 points, with lots of stock holdings changing hands most likely being a cause to what is hoped is a minor blip.

Throwing this into the year to date charts you can see the overall still good trendlines.

The stock is off from June highs, but nothing indicates an overall downward trajectory unless Brexit uncertainty because an actual thing for Games Workshop.

Besides the Annual report the release, the sneaky big news people should pay attention to is a new board member Karen Elizabeth Marsh. She is steeped in TV experience coming from Sony. It shouldn’t be a surprise Eisenhorn was announce the same month she jumped on board. This means we can expect Games Workshop to license its IP to TV and Film, with Sony most likely having the inside track to take up production and distribution. It is also an escalation for Games Workshop as it acts like a modern company with a valuable IP.

Here is the rest of the Games Workshop Investor page releases for July 2019.