Honoring A 40k Champion: Shaking off the Rust

I want to first start off by saying thank you to the great outpouring of love for this project, I was afraid some people might think I was being exploitative. I feel like enough time had past to make this a good way to honor my friend and have his models still mean something.

As for my actual play last weekend, I certainly wasn’t in good enough game shape. I had gotten in quiet a few practice games with friends, which certainly had me confident the spirit of Geoff would guide me. As it turns out playing your friends and knowing their habits is quite different than playing other people with lists you didn’t expect. It also didn’t help that I only got about three hours of sleep the night before, stressing out about the tournament. To make matters even more crazy, the RTT had gotten 28 players, so everyone voted for it to become an iron man GT of five games in one day! Meaning, I had signed up for something I certainly wasn’t prepared for.

Luckily, I wasn’t the only one not wanting to play 5 games in one day, with most players agreeing they would drop out after 3 games, leaving the undefeated staying to midnight. So sleep deprived and stressed I still grabbed my dice and got to work! My first round went surprisingly smoothly as I faced an now old school Custodes Bike list and was able to bring my mortal wound output to bare. My opponent also did me the pleasure of playing very aggressive, getting my psykers into smite range as well.

That first victory was though the only win I would get as I paired up with a demented Iron Hands list, lead by an Astraeus Super-Heavy Tank. An Astraeus by itself is tough enough, but with the help of Iron Hands buffs it is pretty ridiculous. Unfortunately my opponent happened to be a good player, and with the help of going first put me in a tough spot. Still, by turn 3 I had a lead of 18-10 having used the objectives to my advantage. I also hid like a scared little girl, but with my entire army on the board, my opponent was able to break me, with the constant pounding of the Astraeus and his back field of Whirlwinds and Thunderfire cannons.

My last game was a quick affair as the toll of no sleep and another skilled player would do me in. This time it was against another old classic, of Morty and three Lord Discordants! The game was a classic tale, as I wasn’t able to kill Morty and his Deathshroud body guards in my 1st round of shooting and that was that. The real secret sauce though was his Slaanesh Bikers which did the real damage, by clearing my screens to allow Morty and the Lord Discordants to finish me off. In retrospect and my opponent agreed, I should have killed the bikers which thanks to not being buffed round one would have been easy. Then Morty and the Discordants would at least have to go through the screens first.

After that game I was so exhausted, I didn’t even say bye to my friends still locked in games and went home. I feel asleep disappointed by my performance and determined to do better the next time! Like I mentioned before the American West is blessed with RTT and GTs up and down coast so I know my next chance will come soon.

So now with the first go jitters out of the way, it is time to dive right back in! Here is the list I am planning on running for my next tournament…

I needed to make some structural changes to my list to fill in some blatant gaps. The few things I learned from the last list was three units of Meiotic Spores was too much. The role they played of midfield blockers against aggressive infantry lists, only required one unit. As was the case in my last game I was able to block out three Disco lords from my lines with just one of these units and having more runs he risk of being used a sling shots for units that can handle the mortal wounds.

I also dropped the 2nd Excorine which either felt like overkill or was a liability. The extra footprint made it hard to hide and made my deployment very unwieldy. What I am though really excited about is adding in the Tyranid Warriors! These guys got a big boost from both Chapter Approved and Psychic Awakening, most importantly a Damage reduction stratagem which makes much more survivable especially against 2 damage weapons. Certainly not Grey Knight Paladin survivable but enough for the point cost. They also deal out a ton of damage, and even more when you can buff them with Symbiostorm, making auto hits out of 5s and 6s. I do have to sacrifice some screening, but the Warriors themselves are midfield players, making them a screen themselves a lot of the time.

Even at my most competitive, I like to dedicate some points trying out bad or underappreciated units, this time is it the much maligned Pyrovores. Pyrovores have been one of the worst units in 40k history for their entire existence, but now they are “almost” costed correctly, and do have a flamer that can be shot outside of 9″. In certain match ups their role is going to buttress the Warriors, or be annoying screen that even when killed can deal some mortal wounds.

I though will most likely switch out the Pyrovores next time for more traditional screens and Boneswords on the Warriors, but for at least one RTT I want to give them a chance, especially since the dust layer on them needs to be cleared off anyway. 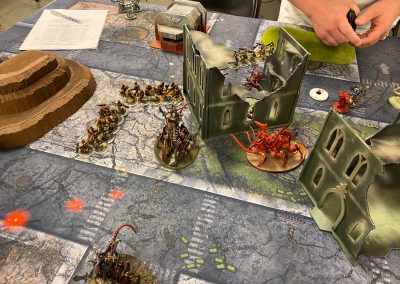 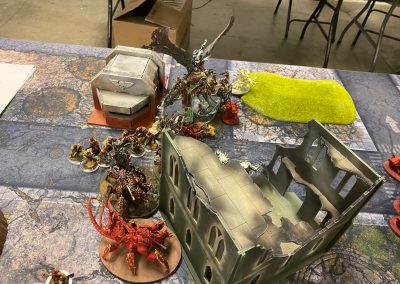 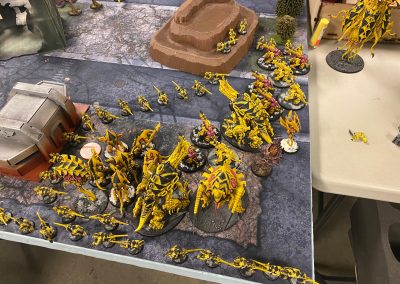 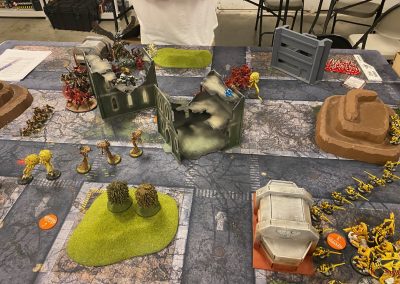 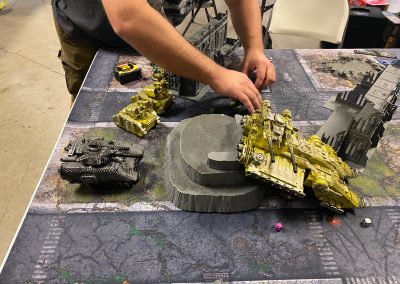