Last year a tragedy hit our Warhammer 40k community, when my friend Geoff “inControl” Robinson died suddenly from a blood clot in the summer of 2019. This devastating event happened on a day he was going to do something he loved, play Warhammer 40k with his friends. Geoff as many know was a larger than life character bringing joy to the Warhammer 40k community, while being an icon in the Star Craft video game community at the same time. I was fortunate enough to become his friend, at a time when he was really settling down in the San Francisco Bay Area. Thanks to the Frontline crew of Reece and Frankie, Geoff was able to jump right into the competitive Warhammer scene when it was really starting to take off. Geoff was a champion of competitive play, rallying as many people he could find to play competitive matches to hone his skills and create lasting friendships.

Taking cues from his other obsession Star Craft, Geoff had always loved playing one type of faction over all others: bugs! So it came as no surprise to anyone who knew him that he would dive straight into Tyranids when it came to Warhammer 40k. By the time of his passing Geoff had amassed an insane collection of Tyranids; brought to life by great painters, who you could say were forced to stick to a particular yellow scheme. Even when many of us questioned the color choices for his army, it became clear Geoff was creating an iconic look that would stick out anywhere he took them.

Many newer  players to the Warhammer 40k scene might know Geoff for his Custodes or Ad-mech, it though was his yellow and black Tyranids that I was raised on with him. These bugs would go on epic road trips with, him, me, and others bonding on trips up and down the West Coast. It wasn’t until Geoff gave into the sweet binary sounds of Ad-mech, that he put down his Tyranids to try something different, but any time new rules or changes were made, Geoff would jump right back in and give his Tyranids a try.

When Geoff past away, Geoff’s family graciously and surprisingly decided to give the bulk of all his Warhammer 40k models to his friends, and this put us in the unenviable position of dividing them up. It was a job no one obviously wanted, but thankfully everyone knew that no matter what this is what Geoff would want, and moreover we knew that everyone could have access to whatever collection each us ended up having.

So this gets to the main reason for this post, with great responsibility, I was given Geoff’s Tyranid army. Instead of treating them like a collectible toys stuck in original packaging, I am going to play them. I am going to play them as a dedication to Geoff for the 2020 ITC season. If there’s was one thing Geoff always needled me about, it was lack of competitive tournament play in recent years, sure I still played tons of games, often with Geoff at his home, but life often got in the way of me attending events that in years past I wouldn’t hesitate to play in. I never thought in a million years that Geoff would be gone and I would miss my chance to play competitive Warhammer 40k with him again. Luckily, I was there to cover many of his great victories, but still it wasn’t what he wanted, he wanted me to play the damn game!

This year I will, and with Geoff looking down, certainly rolling his eyes at the fact it took him dying for me care enough to play in events. So this weekend I start my new quest, trying to do Geoff proud and honor his competitive spirit, even if it just a local RTTs.

Thanks to the new Psychic Awakening rules for Tyranids I feel like they are at least playable, certainly not top tier, but good enough to make almost every game interesting. This weekend I will be taking the following list that I feel leverages some of the best the new rules the Tyranids have to offer.

The RTT I am taking them to usually averages about 16 players, so my hope is to go 2-1 and avoid some of the auto-play Space Marine lists. This is just the start and I hope to play in more events as the year goes on, thankfully northern California is a hot bed for Warhammer 40k tournaments with almost one every weekend, usually filling up to capacity.

Going forward, I will be posting my adventures with Geoff’s Tyranids providing tournament reports and hopefully not making a total ass of myself in the process. At the very least I will have some cool pictures to share along the way, showcasing Geoff’s am amazing Tyranid army.

For those who don’t know or don’t remember, see the gallery below to see Geoff’s unique and massive Tyranid force. 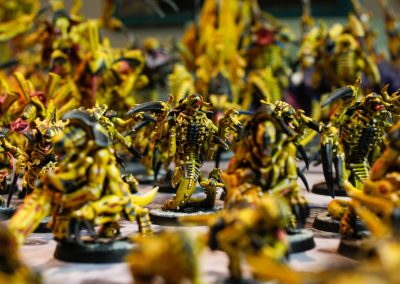 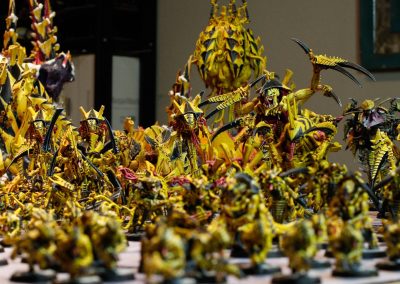 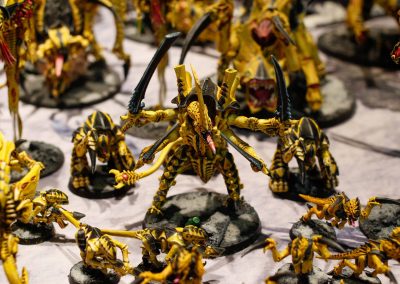 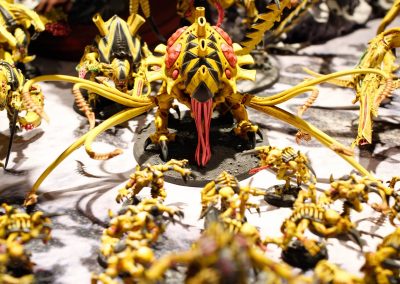 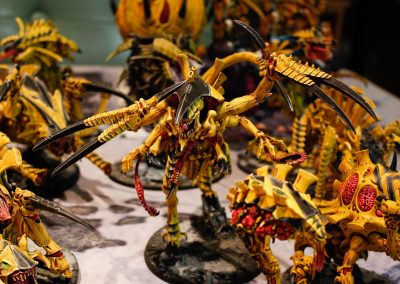 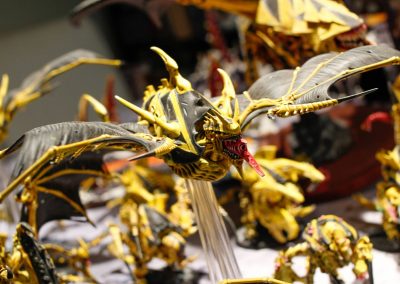