Thank you to everyone for the great outpouring of love for this project. I feel like enough time has past, making this a good way to honor my friend and have his models still mean something.

Two weekends ago, I took Geoff’s Tyranids to a second RTT, and boy was it quite a different experience from the first go around. The RTT was a good size again, with 18 players and fierce competition. I was able to amazingly go 3-0 and a second place showing just behind the winning Blood Angel player. A few things were certainly in my favor for this event, the new nerfs to Space Marines were played, which didn’t matter as I avoiding facing any type of Space Marine regardless.

My first game was my favorite and also happened to be my closest. I was able to eke out a 22-21 point win against a similar list that crushed me a week before. It felt good beating beating three Disco Lords and shooty friends, but unlike my last match up facing a similar list, I didn’t have to contend with Morty, but got a taste of Abaddon and Obliterators instead. Replacing the second Exocrine with the Warriors really helped out here, as my opponent left his chaff open to their shooting in the later rounds, which proved the difference in keeping me even, as he got to my lines.

My second game was against an ancient friend (and Geoff’s) who unfortunately doesn’t get out enough to play like his old competitive self. It was this reason I was able to win this game. My opponent played a mostly standard Eldar army, with a surprise tanky Skathach Wraithknight twist. What won me the game though wasn’t really from my skill of play, but from my opponent’s forgetfulness, as he missed key charges, didn’t move units, and generally just forgot a lot of stuff. Typically, I would have helped; but honestly he had a lot of complicated unit interactions, and I didn’t know half the time if it was some master plan he had. In the end I was able to hold his Eldar off, with the Biovores doing enough work and the rest of my army constantly running away.

My third game was certainly the used the most brain power, as I was faced with super nasty pure Dark Eldar list, which had all the standard stuff, with the new and improved Drazhar, along with a Talos wall being shoved down my throat. I thought I had lost the game on multiple occasions, with me forgetting that you could Vect multiple times and my opponent getting to my back lines by turn 3. Once again the Warriors did the job as they were able to do work in his backfield as almost the entirety of his force was in my deployment. My opponent did make a few mistakes, the main one being, not being aggressive enough with his Wracks, allowing me to get a surprise win.

While I feel like I played well, I still need to tighten some things up, I went through CP too fast in two of my games, where I should not get tempted to use CP for re-rolls, when stratagems later become more important. Also for anyone wondering, the Pyrovores didn’t do much, in fact I forgot to deploy them in my 3rd game all together. I definitely learned to use my screens better and saw I certainly need more little guys, if I am to win future games.

I am now making changes around the edges, by dropping the Pyrovores and replacing them with more Termagants. I am also using the spare points to give my Tyrannocyte Venom cannons, which on the margins has shown to do a surprising amount of work in play-testing. I also gave the Warriors Boneswords, which I don’t want to do, but fearing them getting bogged down by Space Marines makes it worth the investment.

There were a few things I learned in the RTT. I need to play the Maleceptor more aggressively, its Mortal Wound pulse power is nasty, and with a few lucky hits in Assault does additional work, along with the 4++ makes it surprisingly resilient. Going to just one unit of Meiotic Spores was also the right call as I expected, it saved me points, and just one unit did the role of three from the  first RTT. Having the Meiotic Spores also in my opponent’s half of the table, allows me to use The Deepest Shadow stratagem to defend against that one key psychic power many lists rely on.

Looking ahead though depending on how I do at the next event, I am really want to get a Tervigon into the list. I see a lot of Tyranid players gravitating towards them with more horde builds. Orks buffs are also just around the corner, so we can expect to see horde making a big comeback. The core of the army won’t change, but being able to feed Orks Termagants over and over should keep my Dakka units alive long enough to deal finishing blows.

Either way at the moment I feel good about the list at the moment, especially seeing the variety of units the army is brings I certainly am feeling the spirit of Geoff, as people react to seeing the army on the board and the joy it gives. 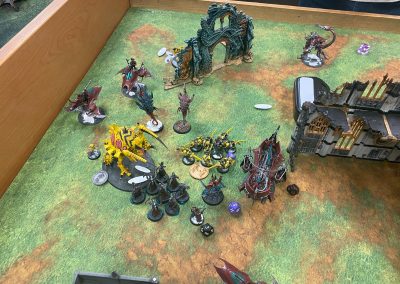 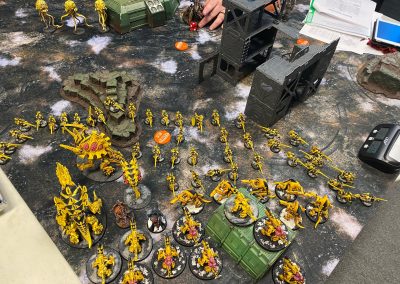 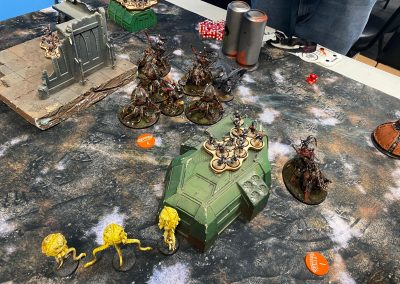 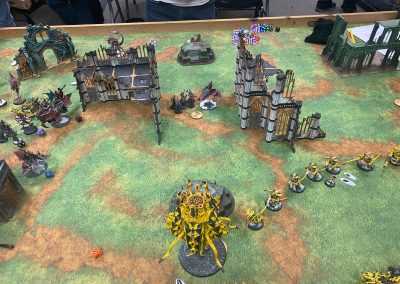 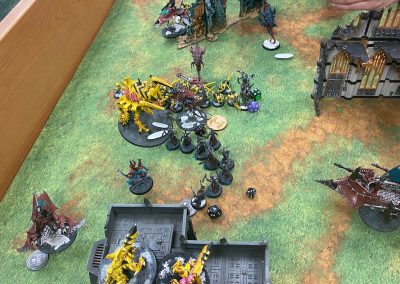 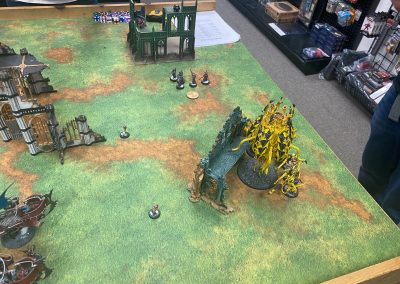 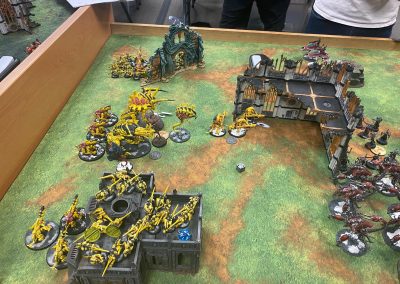 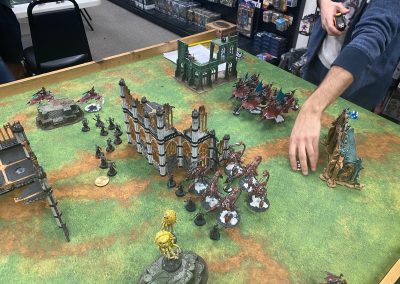 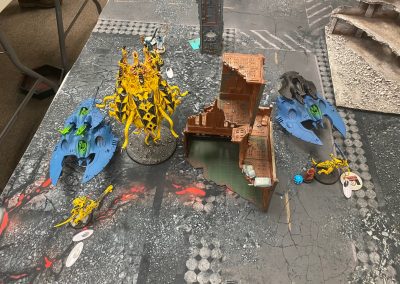 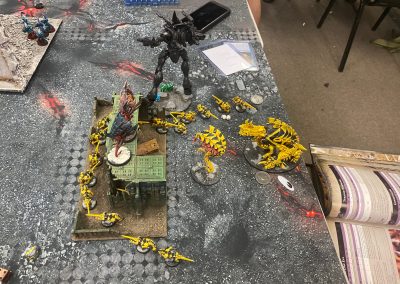 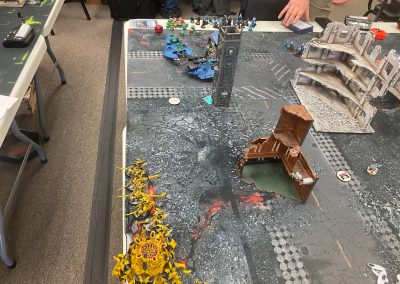 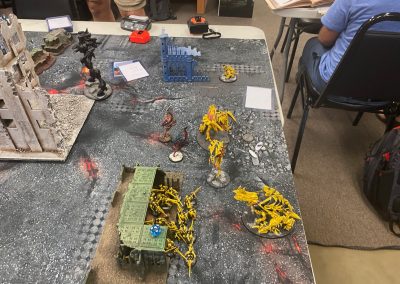 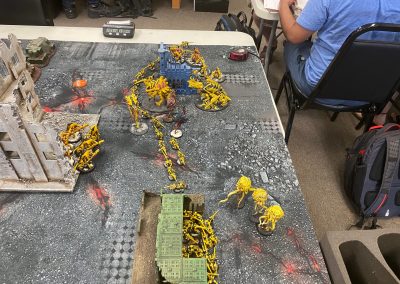 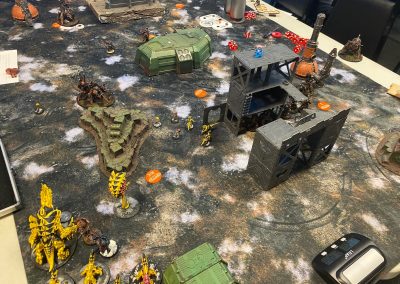 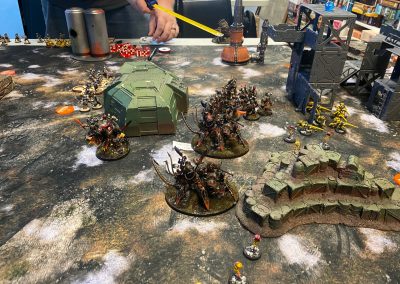 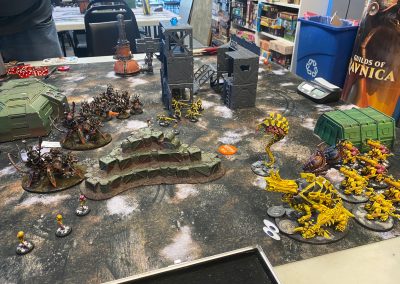 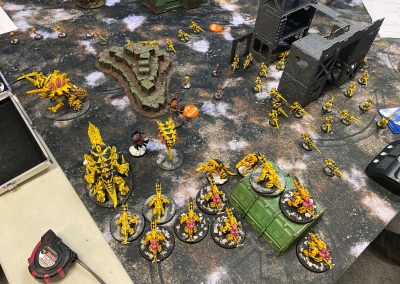 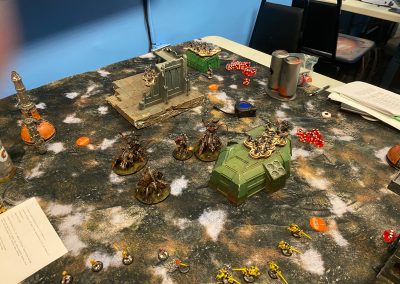 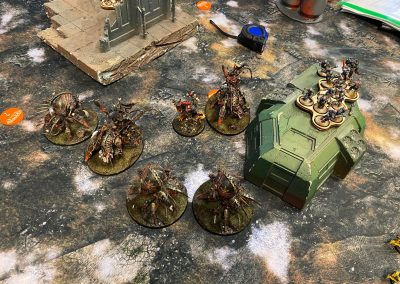 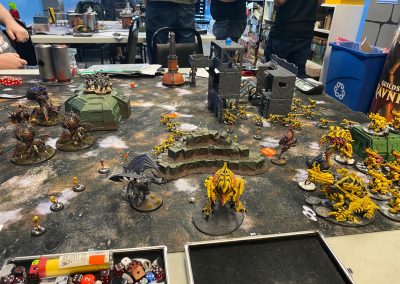