With the Covid cases “subsiding” we got three events 2 GTs and 1 Major over the last weekend! It has to be a Covid record, right? Anyway, along with more events means drama is off the ventilator just in time to spread some joy.

If you want to just look at pretty lists, go ahead skip this next bit, but trust me you might want to stick around for this tale.

So the Iron Halo Tournament was held over the weekend in Bartlesville Oklahoma with over 100 players attending. One player though would stand out from the rest for he produced some very special proxies for his Orks. Having flown all the way from Florida, he had dreams of doing well, but for some inexplicable reason he forgot to bring about half of his Orks! Specifically, it was Mek gunz, and I mean a lot of Mek Guns, 12 of them to be exact! Now some people have said that the Ork player was expecting a friend to show up with them at some point, but it was not to be. Either way, this poor chap was severely nerfed if he was forced to play the models he had.

Luckily for this Ork player he had a plan! A very cunning plan…

As a prodigious drinker the player was able to procure himself enough beer cozies to take the place of the models. As shown in this image below! 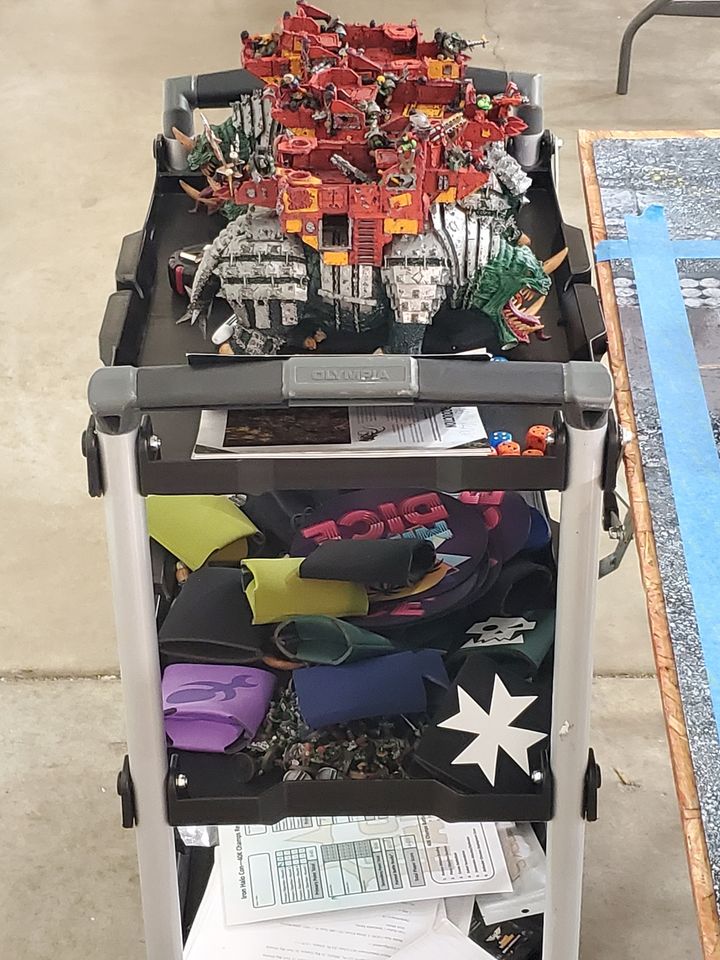 Now all he needed was the blessings of the event organizers and he would be ready to play games at full strength! Having flown so far to play, it seems the Iron Halo folks were keen to let him with these unorthodox “models”. It might have also helped that this particular Ork player is a veteran of the hobby for over 30 years and part of last years 1 ITC team: Brohammer. As well, he is from Florida, so that in itself could explain everything. Whatever the reason Iron Halo allowed him to proceed against pretty much ever accepted norm and rule for Warhammer 40k competitive play.

Maybe… the hope was going to lose his 1st games anyway, so people wouldn’t even notice? Well as fate would have this Ork player ended up going 3-0 day 1, and as you might expect the Internet did its thing. Quickly flames were burning all across the Warhammer 40k community as this blatant no-no was taking place. The sane part of the community saw how dumb this was, but as you might expect White Bath Salt Knighting quickly followed, as a panhandle of degenerates decided this was a good time to defend the pretty indefensible. I get it, I know the Ork player in question he is great dude, pillar of the community actually. I would be pissed off too if I flew across the country in a pandemic to play games and only get screwed because I forgot models. STILL, you find another solution, and not shit on the other 100 players who did managed to not forget their models and expect to play the game on the up and up.

So where does the responsibility lie, beyond the player himself? Well this is a pretty clear case of Iron Halo organizers should take most of the blame, by allowing a permission structure to have this happen! They could have come up myriad of ways to handle this, but instead chose the most unsustainable. Like letting him play with beer cozies, but he auto loses every game and whatever score his opponents gets counts as their win points? He becomes the ringer and plays with the cozies? He changes his list and borrows models from locals to still play? This just few ideas that took me two seconds to think of.

Thankfully, the pressure became too great for Iron Halo, and after noticing that the Ork player got scores impossible for a not fully painted army, he was Red carded and kicked out of the event. STILL AGAIN, it never even had to come to that! As well, what about the 3 players he did beat already? How do you think they feel about the whole thing, I know I would be pissed. Tournaments have a record of removing inappropriate models, but this boldface pathetic attempt at getting around takes the cake for event organizer stupidity.

Like last week, Nurgle Daemons took a top spot, but this time with three large Warhammer 40k events going on a host of lists got top places with each event having a fantastic mix of armies! Lets start with the two GTs first and end with the Iron Halo!

Here are the army lists…

As you can see Space Marines made a bit of comeback in two events, but does it really matter when we have the new codex dropping in a few weeks anyway? We do see 9th edition meta sorta forming outside of Space Marines with, Ad-mech, Death Guard, Custodes, and Deamons riding high. We are also seeing as people get the army painted, Sisters of Battle doing some work, thanks to faith dice and other tricks they are really a good add on to a lot of lists and just amazing as a stand alone faction.