Well I am back from my first two-day Warhammer 40k Touarment since maybe… LVO 2016 and taking my the legendary friend Geoff “InControl” Robinson’s Tyranids. It was a 6 game Major event with 68 players split between two pods to accommodate the amount of tables needed, in two separate locations a few miles apart. Luckily, I was in the air conditioned location for the 1st day, the event was run by Hammerhead Games and you can find the top 34 player results in the following link.

Before I give the details of my personal journey at this event, take a look at the list again…

So as I stated in the pervious post, my hope was to go 3-3 as I expected being rusty and not playing the most competitive list would be a problem. As it turns out, I was able to reach my other goal of 4-2 and a Top 20 placing! As I mentioned above the event was split into two pods. It turned out to be great idea, as you felt like you were playing in a RTT and you knew Day 2 would feature a totally different set of players. For Day 2 the Pods were broken into the top 34 players and lower 34 players. Since I went 2-1 on Day 1, I was able to play in the big boy pod for Day 2.

My first game was against Nolan Cyr, who is an experienced 40k player, but one who like many has only recently been able to get back into the game thanks to Covid. He took a super aggressive Necron lists using a custom dynasty, that made his entire army Objective Secured and have a 6″ pre-move to start the game. He of course went first and was able to put all his Scarabs in my face turn 1, but since I played off the frontline, he wasn’t able to get a good charge off against my army. Turn 2 I was able to send my Dimachaeron across the board to his lightly defended home objective and take it! This forced Nolan to retreat with his Void Dragon to deal with the Dimachaeron. The first 3 turns were a back and forth affair, as we were stuck in assault since turn 1. I was able to win thanks to my 1st turn play and keeping my shooting units from being tagged and trapped.

Game 2 was against Rhys Watkin a Death Guard player, who started playing Warhammer 40k in 8th edition splitting the starter set with a friend and taking Death Guard. He wasn’t as experienced as Nolan, but he had been playing TTS online with Death Guard during Covid to keep himself competitive. I was just glad he didn’t have Morty in his list, and thanks to one of my good friends playing Death Guard, I was use to this army. Turn 1 saw Rhys castle in one corner of the board, which I decided to avoid. On my 1st and 2nd turns I reversed flanked his castle and taking my heavy hitters to one side, while using the Scythed Hierodule as the main distraction to keep the heart of his army occupied. Once I was able to keep Rhys’s army in 1/3 of the table I was able to grind out a victory because of my board control.

Game 3 was against a great player William Saunders and one, who played in the finals against Adrian’s Ad-Mech. I had no idea what to expect from Salamanders having not played against them early 8th edition. I had no idea the amount of tricks and the nasty castle they presented. William was an expert pilot of his army, though he was pretty tired and we consistently had a running joke, as he keep on trying to fly his Impulsor over things. This was a game where I was really going to need turn 1 to have a chance, but as it turns out once again I didn’t win that roll off. William was able to get his Eradicators in range of some of my big bugs and put the hurt down, this was only the tip of the iceberg. While I was able to hold my own for about 4 turns William’s castle was too impenetrable, thanks to the ability to Overwatch almost his entire army namely Flame Aggressors. It though was my ability not to kill his Eradicators that really did me in. Still even with the lose, by going 2-1 meant I would be in the top pod for Day 2.

Game 4 took me to the unairconditioned Pod 1 and James Strickland’s Morty lead Death Guard. As it always, when facing Morty you have to decide if it is worth trying to kill him or not. Usually, I rather just avoid him, but maybe it was the heat or my lust for Biomass that I decided I would try to take him out. This ended up being the only game I was able to go first and while I didn’t kill much it did cause my opponent to commit Morty to his own deployment zone and that was a victory for me. I shot the Dimachaeron up to kill some lonely Poxwalkers on a backfield objective, summoning Morty, leaving me and him to continuedly commit more and more resources to that flank until one of us pulled out or died. Again I used the Hierodule keeping James’s Terminators and Plagueburst Crawlers occupied. I was able to kill Morty on turn 4, but not before James made about 75% of his 4 ups. Once Morty was out, I was able stop James from overtaking me on primary and eked out a win thanks to getting max on my secondaries.

Having won 3 games I was sky high reaching my goal for the Tournament. Unfortunately I was forced to play against my local friend and great player Jake Nelson. He took the meta Ad-Mech with 80 Vanguard / Ranger mix, along with 6 chicken walkers. I knew I had already lost just coming to the table, it was just a matter of if I got 1st turn or not to actually make it a game both of us would enjoy. Jake though rolled a 6 and I rolled a 3, I let Jake play out his 1st turn, but he killed the Dimachaeron, Maleceptor, half my Hive Guard with ease, and instead of getting frustrated for the rest of game I called it then and there. If it was someone I didn’t know I would have played it out, but since Jake was a friend and I knew wouldn’t mind, I decided it was fine to call it.

Having been able to rest for a good 3 hours between Jake’s and my game, it was time to face Salamanders for the second time! This time it was against Zachary Parenti, who luck would have it I met for the first time at dinner the pervious night, so I knew he would going to be super fun to play against. Zachary won best painted for the event as well! Sadly for Zach, now that I had faced Salamanders in round 3, I was ready for them this time. Though the first couple turns didn’t look like that was going to be the case, but thanks to the mission requiring you to hold at least 2 objectives to score primary, it made it very hard for Zachary to stay up on primary. This was also because instead of trying to deal with his castle, I focused on killing all of Zachary’s objective secured units. By turn 3 he was forced to keep units back he wouldn’t otherwise. While I couldn’t make an invaluable save to save my life, I was able to outflank Zachary’s army over the course of the game using the center obscuring terrain to avoid his shooting. Still, if this had been an old 8th edition game using ITC missions I would have certainly lost.

So there you have it, I went 4-2 and thanks to a raffle also went away with some prizes too! Everyone was excited to see Geoff’s Tyranids and those who didn’t even know Geoff loved the bright yellow bugs. Besides some heat induced aggro a few times, I was surprised how me and everyone else kept their cool throughout the event. I heard no stories about cheating or bad behavior and  Tony Myers the organizer put on a fantastic event. The pods format worked out fine and can’t wait to play in another Hammer Gaming event. I know somewhere Geoff is looking down and happy his Tyranids did so well, but I also know he is more happy seeing his friends Adrian and Jesse going 1st and 2nd at the Major!

I wasn’t able to get as many pictures as I had hopped, but the gallery below is what I was able to remember to take. 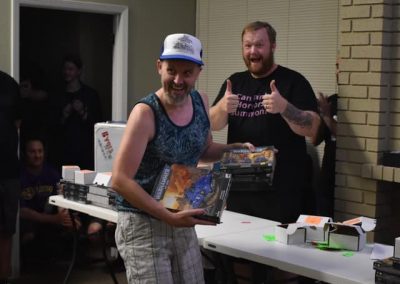 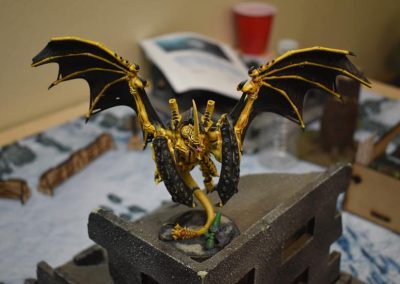 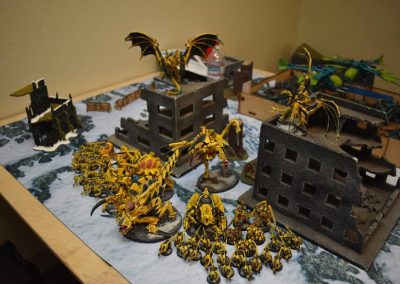 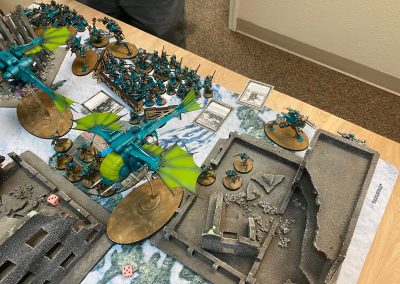 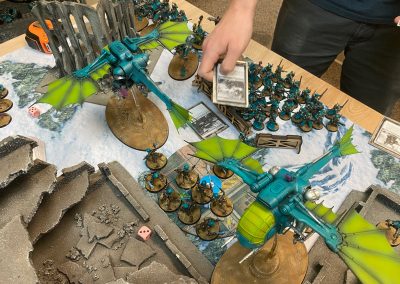 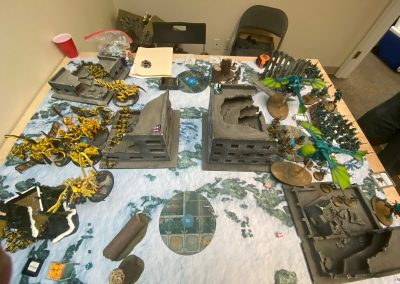 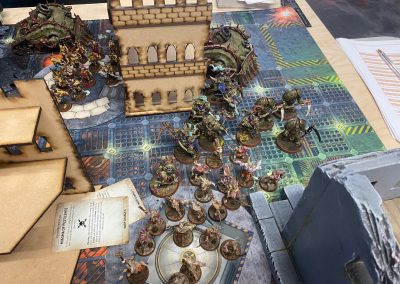 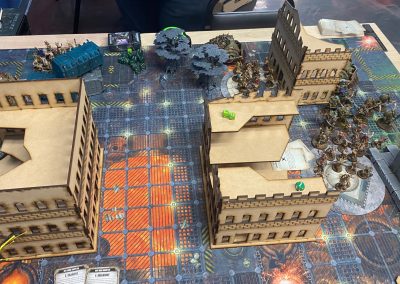 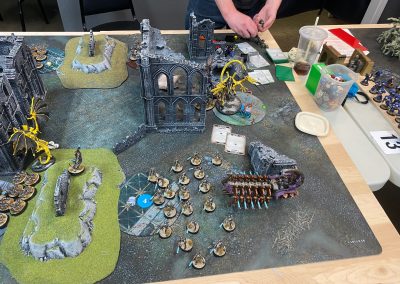 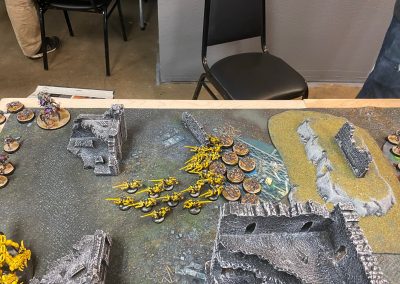 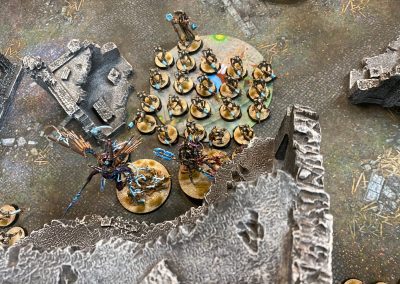 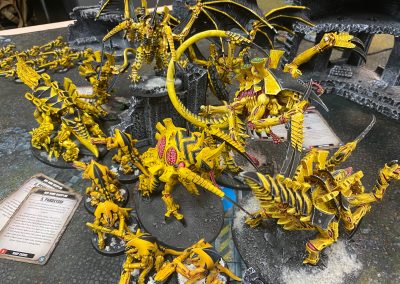 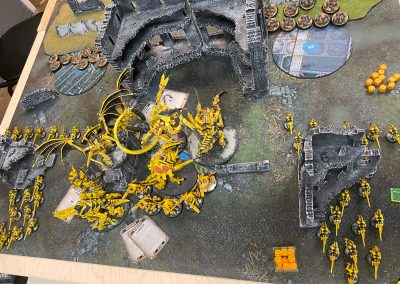