Time for another leak and rumor compilation, this time we have Warhammer 40k Thousand Sons 9th edition codex / supplement, rumors, leaks, previews. As with the other compilations the A running compilation of rumors, leaks, sneak peaks for Thousand Sons 9th edition codex / supplement. With new rules, point adjustments, stratagems and units. Compilation will feature both Games Workshop community info and any Internet leaks and rumors as they come!

Check back everyday as new leaks and rumors for Warhammer 40k Thousand Sons 9th edition codex will be added, without notification.

The Codex is out, so please go to the Codex Compendium page for everything you Need

Before we discover some of the sons of Magnus’ most improved units, let’s take a look at how Thousand Sons Detachments have been restructured.

The Mere Servants Detachment ability encourages a more flavorful ratio of Thousand Sons to their slaves, so we’ll be seeing a lot more Scarab Occult Terminators and Rubric Marines serving at the heart of many armies. 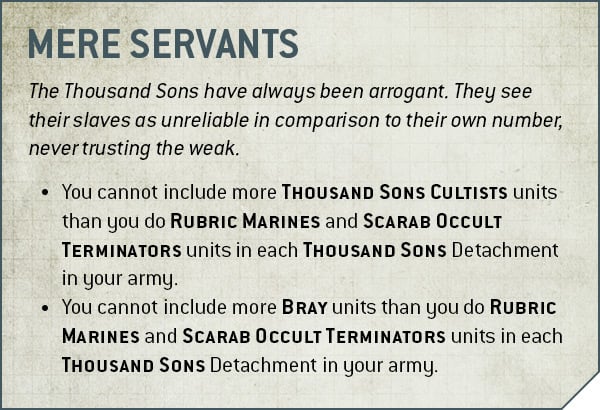 Not only does this ability mean that Thousand Sons forces are now arranged more like they are in the lore, but their Terminators and Rubric Marines are massively improved too. Let’s find out how.

Both units now have an additional Wound. When combined with their classic All Is Dust ability, this update leaves them all but impervious to small-arms fire.

To make things even more challenging for your opponent, these core units never flee from the battlefield – they’ll fight on until every speck of dust has trickled from their baroque armour.

Rubric Marines and Scarab Occult Terminators also have an additional Attack – that’s three apiece for the Terminators. Considering the nasty new profile for the Prosperine khopeshes they now carry, they’re definitely not to be taken lightly in melee.

Meanwhile, soulreaper cannons have received increases to both their Strength and rate of fire, so they make an excellent weapon upgrade option. 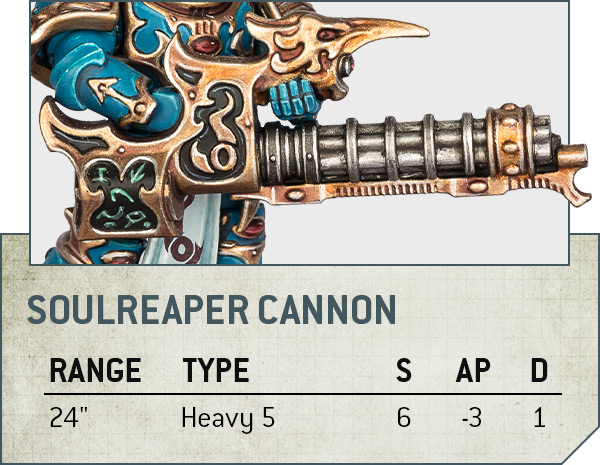 The fighting elite of the Thousand Sons now stand proudly (if they could even feel pride, that is) alongside the Blightlord Terminators of the Death Guard as some of the most powerful and resilient Heretic Astartes infantry units. Thanks to their buffs in the new codex, Rubric Marines are a tough, reliable unit with serious firepower at their disposal – what more you could ask for from a Troops unit?

There’s much more in this codex than a few upgraded profiles, and the combos that the new Stratagems unlock are nothing short of diabolical. For example, you can use Unwavering Phalanx to drop enemy weapon Damage down to 1, kicking in your Rubric Marines’ All Is Dust ability to blunt their firepower. 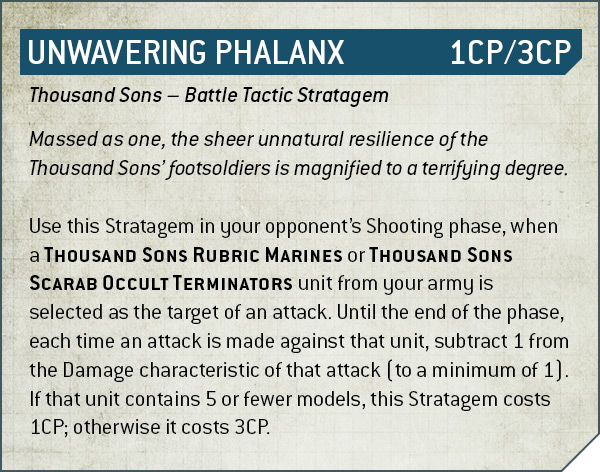 Another effective tactic is to burn your enemy to cinders with warpflamers using Wrath of the Wronged. 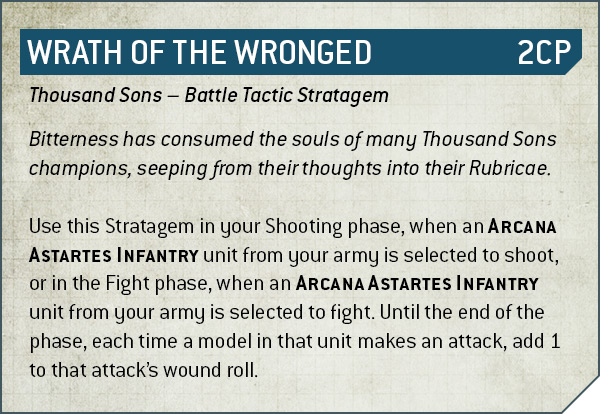 Against more vulnerable opponents such as Astra Militarum or Genestealer Cultists units, you’ll be killing targets on a wound roll of 2+, as their armour will be no match against your Armour Penetration of -2.

For more formidable foes, an Infernal Master can augment your firepower by striking a Malefic Maelstrom Infernal Pact. 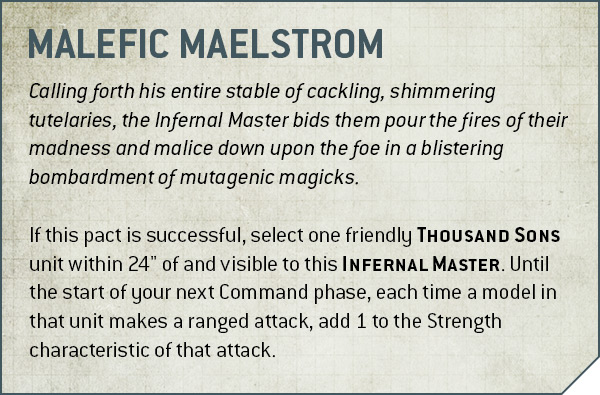 With a boosted Strength of 5 and a bonus to wound, you’re even immolating Space Marines on a 2+, while Toughness 5 Orks are going to be barbecued good and proper.

In our preview of the biggest points drops from Chapter Approved 2021 last month, we revealed that new codexes are on their way for both the Thousand Sons and Grey Knights. We even hinted that a new Character, the Infernal Master, would soon be joining the ranks of Magnus’ sons.

Well, it’s time to meet him, so please be on your best behaviour. 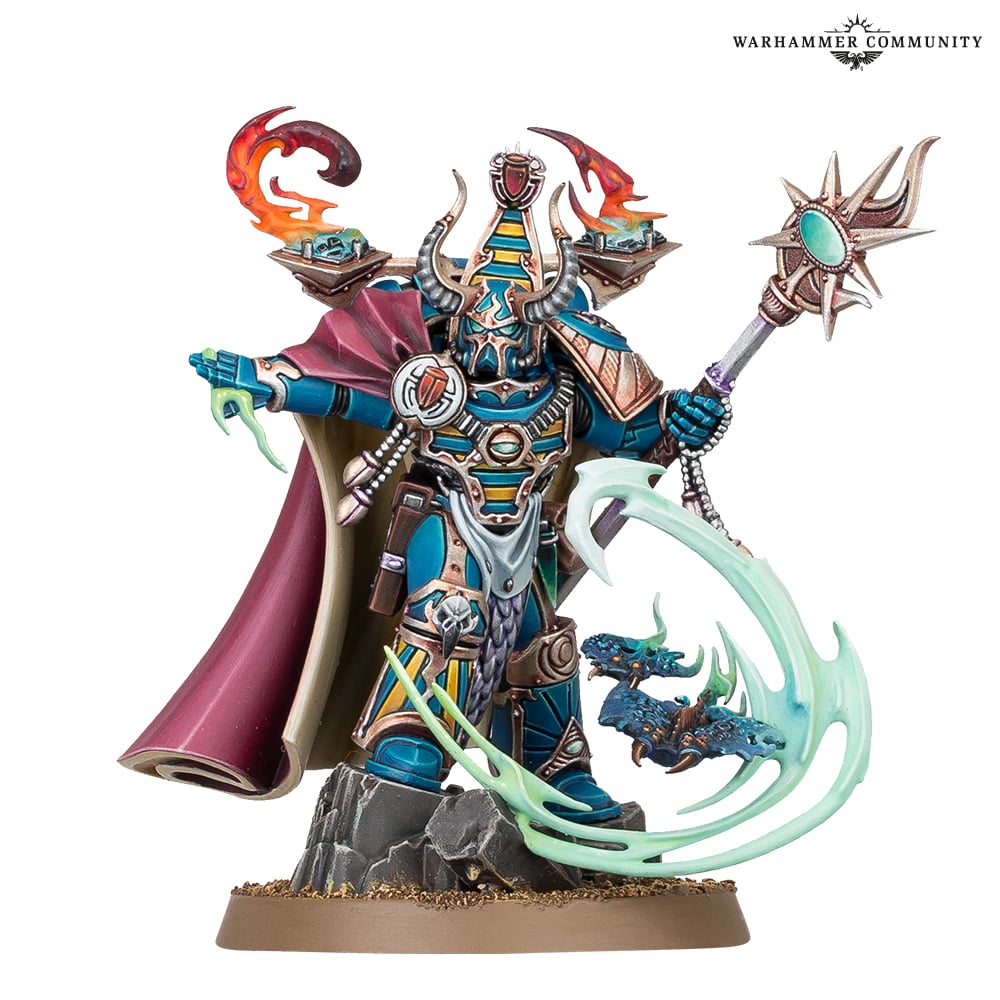 Infernal Masters are sorcerers of the Thousand Sons who specialize in daemonology, enabling them to strike bargains with the powers of the warp to secure otherworldly aid.

If you’ve read The Horus Heresy novel A Thousand Sons, you’ll be familiar with the… er, familiars that Magnus’ sons know as tutelaries. It is these daemonic sprites that Infernal Masters call upon to do their bidding – a process known in the game as making Infernal Pacts.

Every Infernal Master knows two of the six Infernal Pacts that feature in the new codex, each of which summons tutelaries from the warp to intervene on the battlefield.

Based on your choice of Infernal Pacts, the tutelaries can be tasked with killing or confounding your enemies or enhancing the abilities of your own units. Here’s a sneak peek at two of them to slake your thirst for knowledge – how very Thousand Sons of you.

Picture the scene – you’re lining up for a charge, but you don’t fancy suffering the molten fury of a unit of Salamanders Aggressors armed with flamestorm gauntlets on the way in. Strike a pact with some Capering Imps, and watch your opponent’s confidence turn to concern. 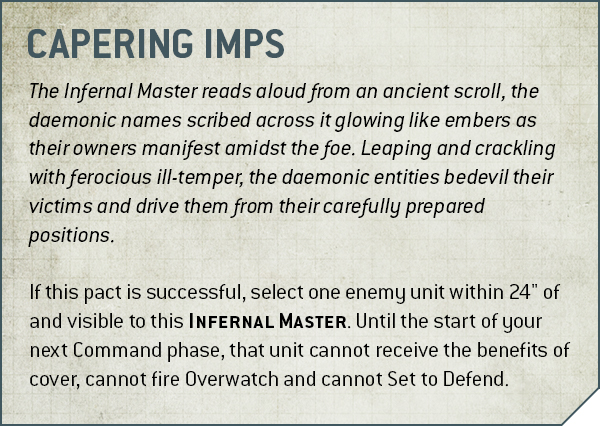 Nice Overwatch Stratagem you’ve got there. It would be a shame if something were to happen to it.

If, however, you favour keeping your enemies at arm’s reach, you can’t go wrong with striking a pact to enhance your firepower with a Malefic Maelstrom. 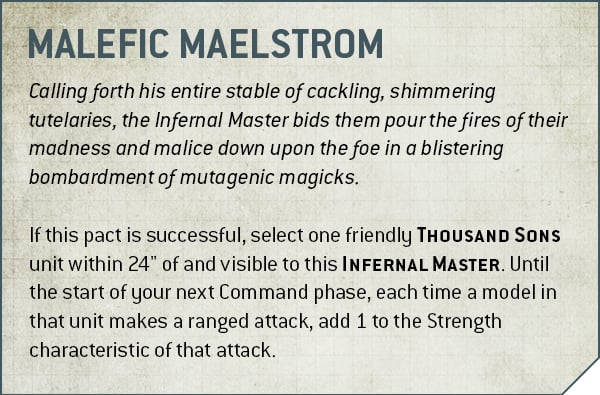 Imagine your opponent’s face when your Rubric Marines let rip into their lines with Strength 5 warpflamers.

The Grey Knights and Thousand Sons have a lot more in common than either of them would ever care to admit. In some ways, they’re a twisted mirror of each other, and never is this more apparent than when they meet on the battlefield. They both want to prove their superiority, and the titanic forces they unleash upon each other are enough to shatter less stalwart minds.

Let’s have a look at a few of those new powers, to get a glimpse of what’s to come.

The sorcerers of Tzeentch, for their part, can simply hit the rewind button if one of their own has their time cut short. Imagine the look on your opponent’s face when you return a Scarab Occult Terminator, simply erasing the hard work they put in to take it down. 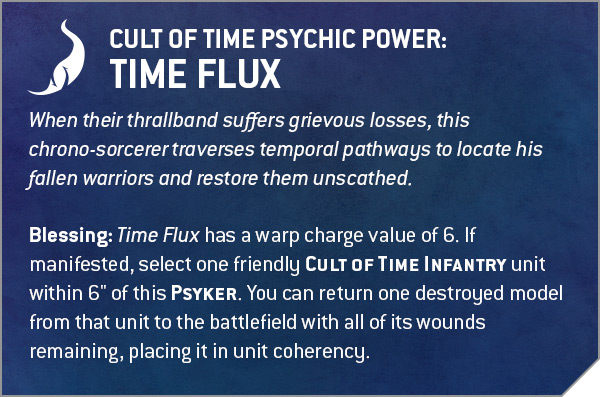 The Thousand Sons are jealous of all power, and their answer to the Empyric Lodestone is Empyric Trespass. It works in a twisted way, of course, but it’s extremely effective in softening up a juicy target. 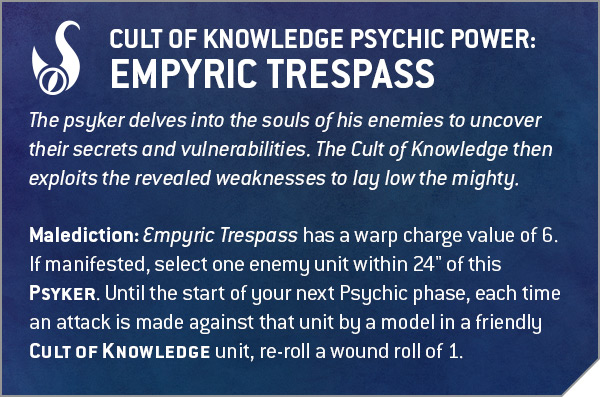 When all else fails, the arrogant and headstrong Sorcerers of Tzeentch will resort to simply trying to force their will upon other Psykers in a psychic wrestling match. What a power move. 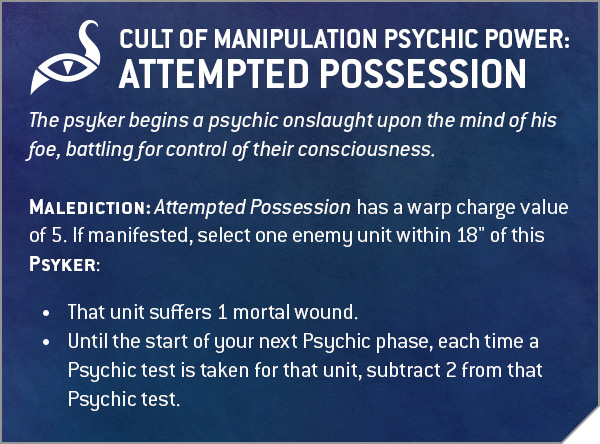 When you’ve got two psychic juggernauts like the Grey Knights and Thousand Sons on the battlefield, you’re sure to see some fireworks. Get ready to pre-order Hexfire this weekend to build up (or start) both collections at once, or split it with a friend and test your mettle with the included campaign book.

The Thousand Sons are getting more thematic and narratively satisfying powers than they’ve ever had before – even before taking into account the codex’s faction-specific Crusade rules. The Thousand Sons have always worked together as a brotherhood of sorcerers, pooling their efforts to unleash powerful forces no individual could possibly control. Now they can do that in battle. Here’s how Cabbalistic Rituals work in the new codex.

At the start of your Psychic phase, you generate a pool of Cabal points depending on the number and type of Psykers in your army. 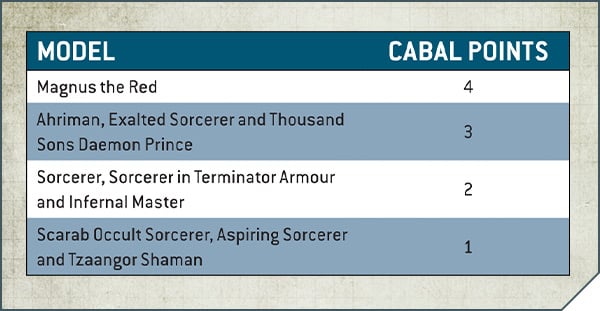 You can spend these Cabal points to augment the capabilities of your psykers – and you’d be mad not to, as you’ll lose any left unspent at the end of the phase. As with many Tzeentchian abilities, there are nine Cabbalistic Rituals to choose from, each of which costs between 3 and 9 Cabal points to use.

Imagine you’ve just manifested Twist of Fate with the fiendish intention of robbing Roboute Guilliman of his hefty invulnerable save before charging him with Magnus the Red for a game-changing (and now likely to be very one-sided) Primarch fight. But just as you’re about to indulge in a suitably evil chuckle, up steps Chief Librarian Tigurius, intent on thwarting your dastardly plans by denying the psychic power… 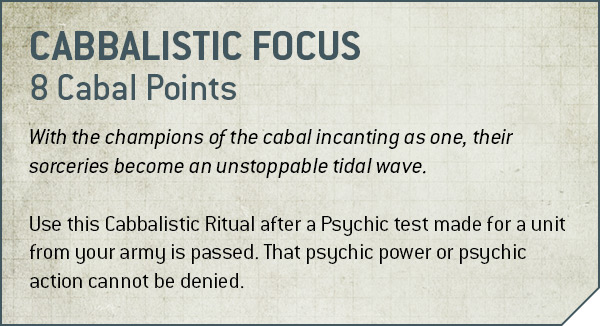 Maybe you’re in the same situation, but you failed Twist of Fate’s casting value by a single point – not unlikely, considering its premium warp charge value of 8. No big deal. Get by with a little help from your friends. 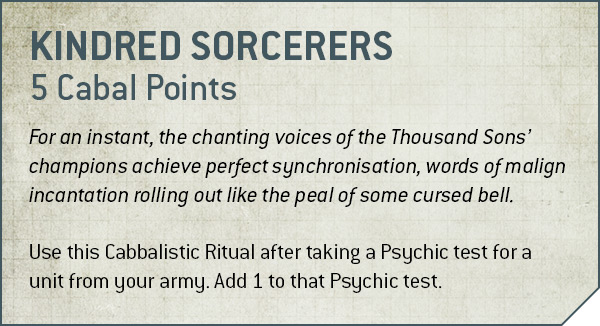 Tigurius may yet thwart you, but you’ll still have given yourself a decent shot at pulling it off.

But there’s more! The Thousand Sons have been reworked to feel even more like they represent the ruling cabals and great cults from the Planet of the Sorcerers as described in their lore.

The new codex features rules for all nine Cults of the Legion, and each has their own bespoke psychic power, Warlord Trait, and item of Sorcerous Arcana. If, for example, you like to put the ‘Witch’ into Witchfire psychic powers, then the Cult of Magic is for you. 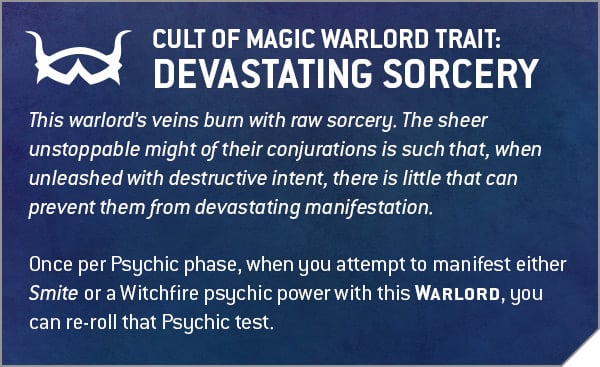 With this ability at their disposal, your Warlord will be better able to blast, melt, and sear the souls of your enemies with a psychic onslaught of the most destructive powers available to the Thousand Sons. What’s more, there are 18 psychic powers available to the sons of Magnus – 9 each from the expanded Discipline of Change and the all-new Discipline of Vengeance – so you’ll have plenty to choose from.

You’ll also be able to upgrade any of your Thousand Sons Sorcerers (if they have Sorcerer in the name, they’re fair game) to members of the Legion Command. Whether they’re the leader of a cabal or a lesser magi who has risen to sudden prominence (such is the way of Tzeentch), you can choose from a number of Legion Command upgrades at a small cost in power or points, according to their unit type.

Whether you seek some additional psychic firepower or a boost to your melee potency, there are a number of upgrades to choose from.*