How does the Space Marines 9th edition codex holding up a year into 9th edition 40k? Well before we answer that, let us take a look at the book itself. 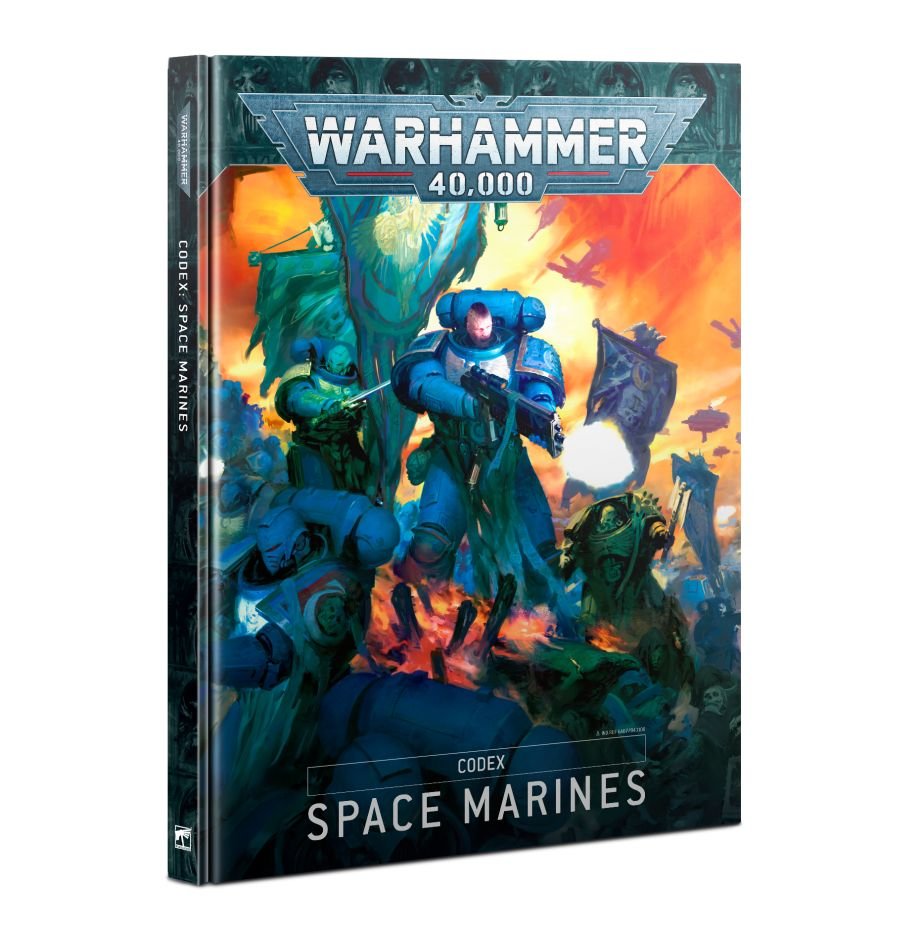 The design of the codex is top notch, easy to navigate, and helped by a jazzed up familiar format: lore, model showcase, and rules. What is different, is the proportions of these sections, lore has been cut to a 1/3 of the book, and the showcase section is also minimized, leaving the bulk of the Space Marines 9th edition codex to rules, as compared to 8th edition codexes.

The codex looks and feels like a modern RPG rule book, with Games Workshop taking obvious ques from other game companies.

GW also did simple things like adding a glossary and page references for rules throughout the book. The pattern of art filler is also well done, with fewer full page images, replaced with smaller pieces, that relate directly to the content discussed on the page. The lore section overall is well balanced for a book that could be all over the place, and not focusing only on say Ultramarines. The War Zone bits standout, giving just enough material for many Successor Chapters, allowing players to develop campaigns and/or stories for more obscure Space Marines.

The showcase section unsurprisingly shows off the latest model releases, but provides helpful design tips for building a Space Marine force. When we get to the rules section we are treated to a content breakdown, again in a nicely designed modern format. The biggest drawback is the placement of the Crusade Rules, right before the Datasheets, by being right in middle of the book just gets in the way from getting to all the rules you will actually be using in the codex.

What if we lived in a Vacuum?

Games Workshop got a lot right with the Space Marines 9th edition codex. The selection of stratagems are simple to understand, focusing on certain keywords and units to be accessed, providing utility to units that would otherwise be useless. Transhuman Physiology is the most important stratagem, but with its limitations certainly doesn’t feel overpowered.

The Chapter Command is a great addition to the Space Marine rules and is an elegant way to provide more options for HQ units. Granted the Chief Apothecary can be a bit much, but the rest of the command upgrades feels just right. The Relics, Warlord Traits, Psychic Powers, and Litanies are mostly tweaks to the 8th edition versions. We could have done with some more thought put into them, but nothing is really wrong with keeping things familiar.

The other new addition to the Space Marines 9th edition codex, are secondary objectives for match play, one of Games Workshop’s big 9th edition misses, regardless if they are good or bad, secondary objectives inside a codex is bad game design, unless they are balanced with all armies and released all at the same time. We then get to the Crusade Rules, which like all Crusade rules only matters to a small subsection of players.

Finally we get to almost 70 pages of Datasheets, where the clear design direction Games Workshop is taking Space Marines is present. The Primaris takeover is now almost complete, with Primaris units filling almost every possible battlefield role previously held by the first born units of Space Marines.

It is pretty clear by these datasheets and stratagems that Games Workshop wants us using Primaris Space Marines almost exclusively.

This also means most old Space Marines are an afterthought, especially the units with clear analogs, like Tactical Marines, Assault Marines, and Speeders. Then you have old marine units punished for being too good in 8th edition like Centurions and Captains. The rest of the old Marine line is mostly shoved into a corner; devoid of playability thanks to no stratagems, good Chapter Tactics, or the strategic lack of certain keywords to help them.

If you enjoy the Primaris changes to the Space Marines, then this codex is really good, not only do Primaris get more options, they for most part fill critical roles, like Eradicators for tank killing. The new Primaris units also do away with a lot of the optionality old Space Marine units have. Partly do to simplified model kits with less things to choose from, this also makes list making and game play easier. An all Primaris force is much more accessible to your average or new player, something Games Workshop always does with the first new edition codex releases. 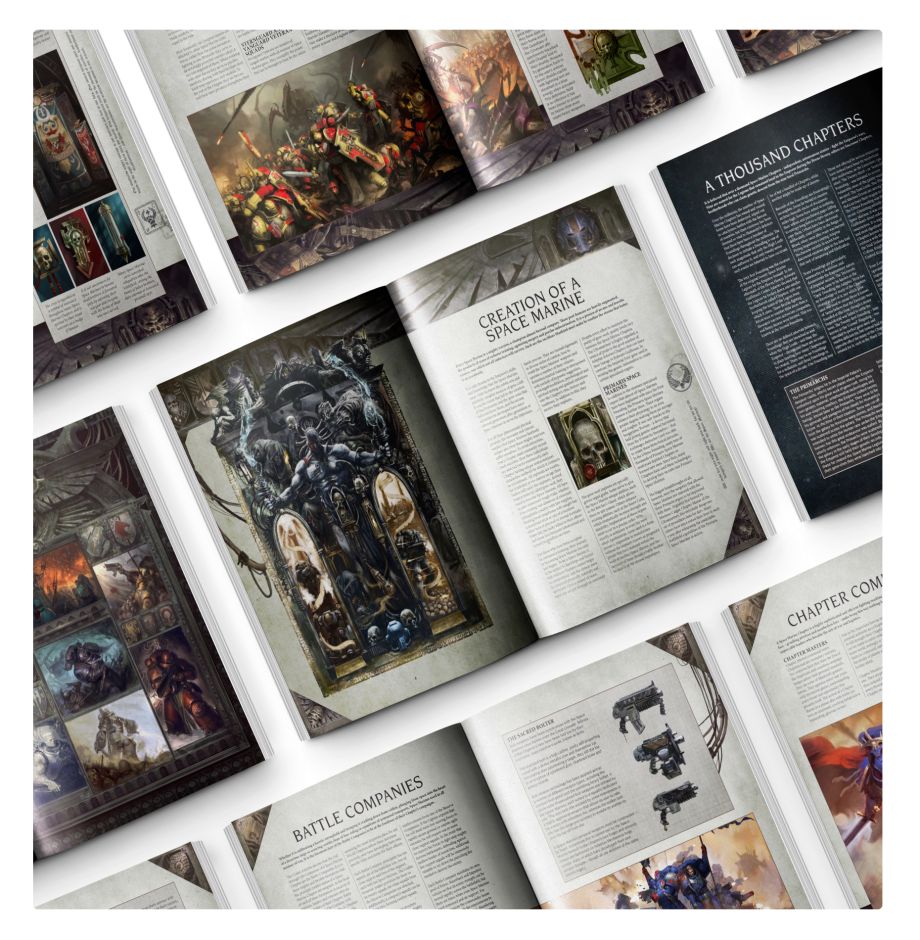 How is it holding up currently?

OK, with what we know now, how should we rate this codex? If we were going to rate this codex on the amount of rules, it would easily be a 8/10, but unfortunately we have to rate this codex against how it is fairing against all the other 9th edition codex released since last year. If you do that, it is only holding up as well as the other 10 Space Marines supplements expanding on this codex. It is this fragmentation that really brings the codex down.

This meant in the beginning of 9th many players could use different combos to dominate games, giving the 8th edition supplement chapters a bit of an advantage, as Ultramarines and White Scars started winning events; taking advantage of super doctrines and the at the time unadjusted costed units like Eradicators, Outriders, and Plasma Inceptors.

Once Games Workshop was done making tweaks through FAQs, Space Marines were still in a good place, but like all things, that changed with the release of Drukhari and Ad-Mech, leaving Space Marines no matter the kind with only one list option: some combination of Dreadnoughts and Vanguard Veterans, along with whatever Troop choice you think is the most efficient. This gives the illusion of Space Marines still doing well in the game. By having to go to this extreme, even with all the different permutations of unit combinations the Space Marines offer it is sad they are mostly unplayable in a competitive sense.

This grim assessment can be said for almost all codexes, not named Drukhari or Adeptus Mechanicus, but if we separate them from the equation, the Space Marines codex should be a triumph.

Especially, considering all the balls Games Workshop had to juggle designing the rules for the flagship product line of the company. If you put it in that context, you have one of the most flexible armies, allowing you to play any style, with the exception of an all First Born force, where you just lack the tools the Primaris units are rewarded with.

If the the Space Marines 9th edition codex was made for a new Horus Heresy rule set, then it might be one of the best codexes ever created, but since Space Marines have to face non Space Marines, and Games Workshop can’t help itself, with rules and codex creep, this codex only does so much. The sheer amount of unit availability and the vast array of rules inside and outside the codex itself, is the reason this army can compete in the competitive environment, and should be carrion call to Games Workshop as to the current state of 9th edition.

END_OF_DOCUMENT_TOKEN_TO_BE_REPLACED

Top army lists from the 7 large ITC Warhammer 40k Tournaments from the past weekend, and two weeks before the Las Vegas Open 2023