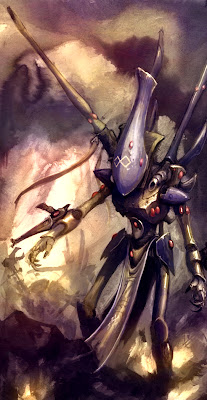 
So yeah I was playing with media file converters and android games (quake III) when I shudda been blogging, I’m sure you will forgive me, lets just say this thing introduces its l33t cock to the iPhone 4’s fashion whore a**


On with the Party


Ok when I first re started my Eldar army a couple of years ago I got two Wraithlords as I really like the kits I even spent some time making them more awsome /dynamic.There then followed some months of playing with them as I experimented and nailed down other parts of the list/army.


Sadly in 5th they blow like a broke hooker something I will be doing to pay for DE, other people will try and sell you them as good, its a crock of shit and they should be sent for immediate scrotal/familial reprocessing. Seemingly even though they are comparable to dreadnoughts in most respects they are worse in almost every way now.

They are fragile , yes fragile……I seem to have more trouble killing rhinos and landspeeders, as soon as mine even slightly become a threat it seems that most 5th armies can hose them off the table in short order, generally they seem easier to remove than most vehicles, fart in their general direction and they collapse. The amount of high str high ap weps and powerfists around these days just makes them a mockery wave to uncle Mephiston guys.  I have also played vs them as well = Lollerskates.

Amongst the many things I tried to wring some value from them I tried hiding sniperlords in cover with fortuneseer babysitter, that makes them hard to kill and is also a terribly inefficient use of points/fortune. this also leads us to address their another big failing, ranged firepower. The ‘dakka’ lord is popular, I’m not sure why,at best you are looking @ 2 str8 shots @ bs4, given the amount of cover and free smoke available for all and sundry plus the 5th vehicle chart, you are generally lucky if this achieves much, you could blow all your h support slots on three with Bl and EML and that’ll run you in the region of 450 points, for 6 str8 shots ?! that is ludicrously low output  especially given most armies can get similar or better output for less points and far less FoC slots. Not to mention the build involves bright  Aids lances …….. which if you have been following my deranged scribbling thus far you will be familiar with the bitter loathing I have those.

You would not pay ferrari money for a ford , so why would you pay Uber deathlaZer prices for a glorified short ranged missile launcher ? given the price /range/versatility of the EML it is actually the superior weapon (even though it is still over priced)

And there is MoAR bad Ju Ju , they are Sloooow. like a pregnant sick whale. if you are running a close combat flavour lord and you roll DoW……. proceed to facepalm.

whereas marine dreads can at least be more mobile and bring their own cover (drop pod) and can be bought in droves from different slots.

Also they are pretty suck in cc and are prone to being tarpitted, if the enemy unit contains a powerfist (likely) it is purely a matter of time about a pint

2 attacks is fucking shit,but its ok, you can purchase the ability to re roll them ….. joy

Its like I’m sat near to a guy in a restaurant, he’s wearing a golden gimp mask, we both order similar dishes at a similar price bracket from the menu , the waiter brings him out something mouthwatering and sizzling causing me to drool, when my meal turns up 20 mins later , its a lukewarm turd with something that looks ominously like a bright lance poking out of it……

Finally and just to make extra sure it has no place in a serious competitive list they gave it wraithsight , yup its unreliable too, unless you want to dedicate MoAr points in the shape of a farseer to babysit them, and you can bet your life the time you decide to risk it because you need your farseer/warlock somewhere else or your found to be just outta range, watch the ones flow ;o)

And finally unlike warwalkers if you buy a second gun the same as the first it becomes TL for the same price, making it 80 points EIGHTY for a single TL BL. Just….don’t….do….. IT !

Ok I think that covers the Poop lords failings Ill try to expand on some positive uses and things to consider.

Most importantly and possibly the most remarkable thing about the lord is his massive str of 10 and the fact that he is also an MC means he hits harder than anything in the game, str 10 with 2d6 is truly epic at armour penetration, the re-rolls to hit from the wraithsword make him surprisingly good at even smashing down vehicles that moved (if he ever gets in range)

Also if you get lucky, non Eternal characters sometimes fail their invun save so its worth dropping some str10 on their heads if you get a chance

I cant really cant think of anything else good about them , 2 flamers is nice …… nice model *clutches at straws*

My personal fave and the fit I use with my SpaZe CloWnz Build is  three with nothing but 2 flamers and wraithsword, no frills and cheap ,if spare points are going about I’ll get em a shuriken cannon. as they will almost always run spending any more points on weps is pointless, if you use all three as a ‘unit’ they are pretty good , 6 flamers in a concentrated space, chuck in doom …… also nine re-roll to hit str 10 MC attacks, can smash face in cc (even moving vehicles are in deep shit), you can move around the models so the less injured ones give cover to the weakened ones.

The sniperlord is a dakkalord with EML and BL, for long ranged AT fire suppression some people swear by it, can’t say I’m a fan.

Dakkalord = scatter laser + shuriken cannon , gives you 7 bs 4 str6 shots , word to the wise is you may notice you should be packing quite a few serpents these days, your str 6 spam should be well covered and if not I would be buying walkers for that, not lords.

Tactical Lord = Another build that is ok , flexible Bs 4 EML missile launcher for more ranged support and 2x flamers + wraithsword to allow him to support local  scoring units in a counter assault / deterrant role when not shooting shtuff/camping an obj.

As with marines there should be two flavours , a normal wlord and an ‘ancient’ or somesuch (possibly exarch) with improved stats.

I see these guys benefiting greatly from the presence of a bonesinger (who can join them ?), getting possibly fnp and/or regenerate.

Should be available in ‘units’ of  1-3 with one being upgradeable to an ancient maybe make them available as elites for an Iyanden army.

Make them fleet. Im all for keeping wraithsight but the rule needs re-working.

Holofields give a 5+ invun save and + 1 to cover saves ( the wing things on the back are holo’s ? I’m sure the old fluffblither on the phantom said its wings were the holo generators)

The wrist weps/options stay the same , wraithswords can also be bought as a pair giving + 1 attack

heavy weps get fixed and reduced in cost and pairs are no longer TL.

have a true heavy version that only takes one wep each but can mount support weps so D-cannons in my pants, vibrocannons and spinners and possibly pulsars.

And thats how Sorrow C‘s it ….

Back next week hopefully with some hobby updates, Scheming DE schemes and of course Retroing The Grim Reapers