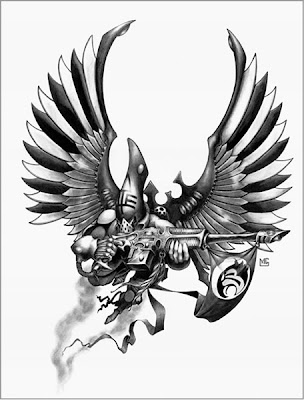 Back once again with teh Rant

Sorry for the lack of much this week, nurgle has invaded my head and lungs and is laughing at me.

Its kinda late for me to be writing now, but duty and all that ….. and the smallest violin plays for Sorrowmartyr

Some comments from this weeks poll have made me feel I need to enter a disclaimer at this point.  I am of the belief that the most solid and competitive of currently available Eldar builds are mechdar, with bike council mechdar included. All of my articles are written with the intention of giving critique and advice on units in the context of competitive ie, Mech Eldar play. Sure some other units/lists kinda sorta almost can be forced to work ok, but I’m not interested in that now, the solid bulk of my gaming experience and success to date is with a Mech list. Having said that I re-started with footdar over a year ago  (I have played eldar since 94′ with some breaks) and through many games, trial and error and a process of elimination through playing with all the units ended up with a mech list in 5th, thats not because teh internet said “mek iz bezt” its because at least for me it IS.

There was a noticeable jump in effectiveness when I switched to pure mech. I have since been constantly refining and tweaking my tactics /list since.

So this article is written about hawks based on 1. how they work if at all in 5th. I will try to include some help for those that just gotta play with them. masochists :oP And 2. how they work in relation to tourney build mechdar.


21 points for a flying vet guard?! oh dear. Lets be honest, they aint good, too many points for a pitiful drizzle of str 3 fire and a str 4 ap 5 large blast ‘when’ they come in, 4+ armour is actually pretty good, not being a meq player I appreciate these things, and with fortune its pretty good vs small arms, heavy bolters/flamers are another thing altogether …..they are not going to hold up under any determined effort to be rid of them..

Against most meq opponents hawks are no good, the aim being to keep as far outta range as possible and I assume hosing Doomed marine targets from out of rabid fire range, its not going to do alot, the template attack has worked for me on meq, but it really requires doom and an opportunely bunched target to get much out of, I felt lucky when it paid off, however, the same tactic on non meq is lulz. Im not too sure what hawks were supposed to specialize in really, unless it is slaying guard and spammy orks/nids , if over 50 percent ALL of your opponents are marines  its pretty much auto disclusion form any list you care to build for a mixed competitive environment.

They are fairly good at suppressing stun-locking and sometimes destroying vehicles with the intercept rules and EMP grenades, let it be known I love EMP grenades and for me alongside the ability to hit even fast moving vehicles on a 4+ they come really close to saving Hawks from the toilet. I did say ‘close’, they be toiletdar  due to the nature of the grenades the more hawks you can get into contact the better, in fact, volume is needed for any of the Hawks attacks so max size squads all the way if you are planing on doing anything other than Rubberhawking with them.

If I HAD to use hawks I would commit bukakke, or is it seppuku….  or had run out of other slots for AT, I would run hawks as another anti tank option (or for finishing immob walkers) sadly at least 8 will be needed for volume, but just taking intercept for the exarch, so 185 points , which is oddly more or less the same price as 5 dragons in a serpent. they will do a fairly adequate job on tanks IF you can get them there(try flying up behind a serpent for cover then popping out, its obviously much better for finishing stuff thats been stunned or immob’d before hand, auto hits really lets EMP’s shine.

Assuming you are not using any other FA slots 3 x minimum squads with Exarch and skyleap can serve to really piss your opponent off, which admittedly is gold.

However dont expect much hot death from your 400 points worth of yo-yo units, I suppose you can look on it as 400 points denied to your opponent,  needless to say you will want an Autarch or possibly 2 to get the shenanigans to start nice and early/reliably, although I prefer Doom from a Farseer to get the most out of those blasts,so tend towards one of each HQ.

Im not sure I can think of much more to add at this stage, In my standard mech tourney lists this lot will never be seen, mostly because even if I do hop them around behind the vehicles for cover they will attract all the anti infantry fire my opponent cannot shoot at everything that is all cosy in their serpents Also points spent on them is not points spent on tanks, with mech you want as much armour as you can possibly get in without gimping the effectiveness of what is inside, also my prisms have the blasts covered there too.


Looking at the reavers and Bomber in the DE book, I think turbo boosting  hawks that drop grenades as they pass over will be the way to go, I would like to see different ‘flavour’ grenades to choose from.

I cant see the problem with keeping intercept and EMP grenades on them , but perhaps making it part of the fly past ?

The exarch weapons could do with some improvement , maybe make them ap 3 to balance out the amount of anti meq fail the hawks have. I cannot see a way or reason to change the lasblaster, tho guard currently have access to a much superior las weapon which does rankle a little.

What do people feel to lasblasters gaining rending ? say 20 shots from a unit , thats only 2 rends on average , around 4 with doom ? throw in cover and I dont feel that is terrible.

Also the idea of them being a move-shoot-move unit fits and is appealing.

I also like the idea of the exarch giving the unit a dodge bonus to cover saves when they move, something like re roll rolls of a 1 for a cover save when it intervenes, to represent the increased difficulty of shooting such small fast targets with cover between them and the firer . I introduce this as an idea as I feel improving cover saves to a possible 2+ for Tboosting might be a bit much, the other alternative is to give em a permanent 5+ invun dodge save ?

Well  thats it for now as ‘The ILL’ is taking its toll , I can hear the honey and lemon calling for me.

Hoping to get in some much promised hobby v soon, however, this miserable filthy illness has kinda prevented it this week :o( , hoping to do the first of my DE army unit ‘Rave’ reviews mid week, I’ll be going through the book in the opposite direction so up first is the DE Archon and any SC’s that fit that description.

Lastly, I’m still fishing for feedback on the blog, Poll is still up on the right, clicky clicky five dorrah ? me love you long time…  please have a poke at the previous post ‘Speak to me Goose’ would love to hear your thoughts.

PS, Apologies to those that discover/suffer the hidden link,it made me lol