It Rubs The Lotion on Its Skin ……

Welcome to the next rave review. This week I’m discussing the DE Haemonculi .
Based on many fairy tayle, folk, serial killer and modern horror references, these twisted bastards are the DE drug pain pushers extraordinaire, and BELIEVE they have really elevated it to an art form. How fitting that the nearest the DE have to an artist is what pinhead wants to be when he grows up………

From a game perspective Haems are a great support or secondary HQ and already seem to be a popular choice in a lot of lists popping up.

Lets see what they offer fresh outta da box for 50 and 80 points.

Haemo – pretty much an unremarkable stat line, does not even offer the unit he joins an LD boost, however he can add some extra CC bite, TBH you are mostly buying him for the pain point,opening wracks as troops and some of the toys he can carry.

Ancient – Much Improved stat line, is often going to be pushed out by special characters or the Archon for main HQ , HE does not offer anything over a standard Haem other than the stat boost , so am currently seeing little need for him, obviously a nice choice for a theme list main HQ , but in terms of stripped down competitive play normal Haems are where its at.

Wargear: Heams can bring a bewildering array of ‘tools o the trade’ ranging from pistols to things that defy description.

Venom Blade – “Thats not a knife” Great toy for 5 points , means he can wound everything over and over and over, great value shank cant really go wrong with it , definitely consider if you are shaving points or just running the Haems bare bones for the pain point.

Stinger pistol – meh, not a fan , may as well stick with the freebie splinter pistol.

Pow wep, considering FC is a short hop away for him this aint a bad option to save 10 points over the Agoniser as it will mostly wound on 4’s from then on, worth considering for the points conscious archon.

Mindphase gauntlet – I suppose its ok ish in proximity to a raider with tormentor grenades, I feel this is a largely useless filler/gimmick item. cant recommend it. 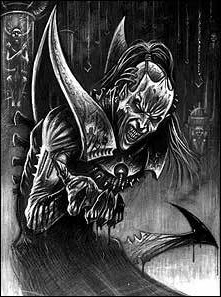 Flesh Gauntlet – I love this thing, the description rocks and it’ll ID anything without eternal warrior, one failed save and ‘Sput!’ I have joyous images of using 2 heamo ancients and 4 normal heamos in a derp star maxed out with flesh gauntlets and other suitable impliments to go ‘hunting’ T wolf derp stars with, *yelp yelp yelp , LOL heeeere doggie …… sigh.

Agoniser – I imagine this will be seen often, being waved around by Haems the world over, a solid if not slightly expensive choice, will certainly add to the power of a unit with one in it already.

Electrocorrosive whip – Due to the haems low attacks and Initiative its a fairly pointless item , it will be improved once he has FC but not really as good as other choices for the same points , It might work ok on an Ancient with a clone field.

Huskblade – Waaay expensive, not one im going to be putting on plain haems with their underwhelming combat stats, will be nice enough on an Ancient in a theme list. I Just resent paying so many points for a srt 3 wep that essentially librarians have for free @ str 4.

Animus Vitae – My gut instinct is to shy away from this, its a ‘special’ cc wep so no bonus attacks @ str 3-4 it does however  allow you to theoretically collect pain points fast, I’m not convinced it is of much value as his unit will likely have FnP and wont get the benefit of FC unless it wins anyway, I suppose it would allow him to courier pain to other units more readily, possibly handy in an army designed around pain, at least worth a test or two.

Liquifier Gun – Another class piece of kit so, nice for the price you could almost buy a haemo just to get one/more in a unit, it has a 50% chance to just flat kill marines and a 33% chance to kill fnp troops and hurt termies , oh yesyesyes YES my pretties, Im looking forward to seeing Meq players feeling as threatened as I do when flamers abound…… like curry to a pisshead.

Soul trap – Again I like these for the cheapness, does very much depend on your wep load out, another possible good one for the Ancient to use. Its fairly situational anyway so best to leave it off the haemo lite’s.

Scissorhand – 3+ poison and + 2 attacks (total) not at all bad , will slaughter Geq and should at least produce consistent wounding on Meq, weirdly these are really good for hurting MC’s ….

Archangel of pain – Again I feel myself wishing tormentors stacked, its erm, ‘ok’ I suppose, as its resolved in the shooting phase you will likely have set up for your charges already so It’s pure luck how much this will help , on the other hand it may help you out in combat , I just think its a filler item, doubt I will ever use it.

Vexator mask – Pretty cool background fluff , let down by reliance on a LD check (again ?) will be nice if it works, more filler.

Hexrifle – Assault 1 sniper …. interesting , I like the idea of this , however you have to hit, then wound a multiple wound model thats not in a unit, then they have to fail a test based on wounds stat ….. I guess if it works it will be nice, especially if you can sneak one through on EW characters (lysander) I mean it will remove ANYONE, maybe use hellions to pull them out of the unit then spam hex’s at them ? dunno not my cup of tea seems like a big faff when there are many other ways already built into the army to deal with most of the stuff this would work on.

Shattershard – I like this , its amazing, T test or buh bye, do not pass go do not be EW, I keep finding myself trying to shove this in lists despite a liqui doing a good job , why fight it :oP 15 points to have a 33% chance to kill most EW’s flat dead, gone, Mu huha ha ha , In your face Lysander in…….your……FACE, now say thankyou.

Cruicible of malediction – yay , only thing vaguely approaching psy defence in the book and it has random range and relies on an LD check , cant say I’m chuffed to bits , IF you have trouble with psychers go for it, considering GK is soon set to drive seer councils off the table once and for all. I see this becoming even less useful, or maybe more useful …… depends if each individual GK will have to test might even do something coupled with tormentor saturation, time will tell. In the meantime Ill use other means to deal with psychers. 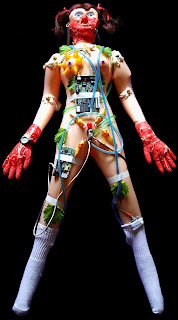 Orb of despair – Str 10 ap 1, one use, scatters and does NOT work on vehicles *facepalm , it disappoints me , and 20 points for a one shot weapon ? WTF ? kelly, unless Im missing something its a waste of time and points.(filler ?)

Dark gate – Again, lots of points and frankly underwhelming, marines will just save most of it and tanks are very very unlikely to suffer substantial damage to justify the cost, kinda had geq under control with the liquifier anyay, not sure what Kelly thought we were supposed to do with this… another crappy/filler one shot weapon that will never feature in anything but a ‘fun’ list.

Web way portal – this is one of the main items I expect to see on Haemos, they are the logical and ideal courier for these, fly up the table, hop out the transport with some wracks to soak fire and drop it off , should be able to get it a fair ways up the table , best to get at least two WWP’s , I’m plotting a Freaks list that uses two portals , I will report back after some further testing.

Urien Rakarth – Surprisingly not alot to say here, he’s a pumped Ancient with T5 and the ability to regenerate 1 wound per turn, strangely makes him a logical choice to be in a unit of Wyches flanked by a couple of Shardnets. also his ichor gauntlet is an up gunned Flesh glove, possibly his nicest ability is that he quite literally brings the pain, D3 to be given out at the start of the game on wracks and Grots (so FC outta the gate). Oddly Is not a no brainer for a Haemo themed armybecause if you take him you end up with three less haems that you could take, if you are happy with ‘only’ four its all good ;o), However, note if you are looking to max pain points its more efficient to buy basic haems than Rackarth as three with liqi’s and a vblade cost the same. sadly Urien does not even have a liqui gun …. they gave him casket o fail instead. I really like massed Liquefiers…..

The main deal with Haems is the distribution of pain where you want it when you want it, they can leave their first point and go join a unit or start a unit off with a point and leave once it has earned its first point to ensure another unit gets Fnp asap. Subsequently they are likely to be if nothing else useful in any list you care to write.

In my current Test List I have two just armed with liquefiers, Experimenting with starting them in two units of six Reavers, they leave them in the first turn and the Reavers boost away, they now get 3+ cover and Fnp, should make sure those meltas gets there. I usually try to position the Haems so that when they leave the reavers they can just get onto the Archons raider.

After the Archon and the Incubi jump ship the Heams stay onboard and float about gooing stuff with their liqui guns.

All in all a very useful and cheap  ‘enabler’ HQ, important cogs in the engine of pain that is your army. I expect the true depths of their usefulness have yet to be fully plumbed and will be putting them to the test in coming months.

At the weekend I’ll be posting this weeks Eldar retro and I’m doing some work on My DE test paint schemes, In other News my two Ravagers were dispatched to me 12 hours ago ……