Ok lets look at what you get for the flat cost of 65 points.

The answer is lots.

Base WS of 8 !! and I 8 and 4 attacks ? yup she is a regular quicksilver dagger in the groin, what a wonderful statline, of course this is balanced somewhat by her low S and T, something you will just have to get used to if you are serious about space elves. There is usually some sneaky or technological way of sidestepping these weaknesses as we will see (very DE no ?)

Also included in her price, combat drugs and plasma grenades and a 4++ in CC….. 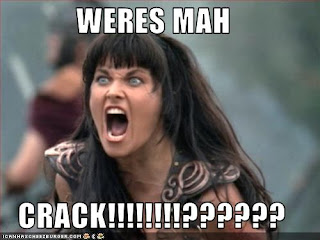 Unfortunately straight out of the box she is going to flail away very gracefully to not much effect, no matter how much that might amuse you its better to humiliate her after the battle, so I suppose we will have to look at pimping our ride….

First off before I digress too far I’ll discuss the combat drug effects and how they work for her as its part of the base package before you shell out for toyz .

Hypex – Is ok I guess, I suppose it makes her see the enemy as giant chocolate bars/shoes or something…

Grave Lotus – only really handy if you have not opted for the Agoniser, but handy with the power wep or Electro whip options stacks well with FC for possible str 5 charges ……

Painbringer – we like this one makes your str 3 statistically better than str 4 and works wonders with an Agoniser, personally I would be hoping for this ‘flavour’ as she will kill loads with it.

Adrenalight – extra attacks is always nice, not as good as Painbringer but it’ll do

Splintermind – free pain token, starting with a token is great, Im currently thinking she should stay with wyches anyway, which if I read it right  means that her and the unit would have a total of two tokens if you roll this ….. still I would prefer some of the other results as you can get pain tokens through other means.

So yep the free drugs can offer a fairly significant if not random boost in her effectiveness. Now lets have a look at her Wargear otions.

There are some bits to choose from but unless you are feeling adventurous or experimental, I cannot see it being worth your while taking much other than Agoniser from the weapon options, especially as they have been priced in such a way that taking a power wep for 5 points less seems a bit herpdy derp.

Venom blade – good if you are on a budget as it can force lots of saves on tougher units plus she will almost ALWAYS wound geq and same applies to meq once she has FC.

Power wep – as I said before , has been priced funny @ 10 points it would be worth consideration, as she can get FC and do well with the drugs, but for 5 pts more the agoniser is just flat better , you aint saving any points with this , lets be honest.

Agoniser – Its almost like she should always have one, means she can handle anyone and really helps a Wych unit she is in not get bogged down, Its shame she looses any benefit from FC … however if you get lucky and roll the re-roll wounds or extra attacks , she is really going to hurt something.

Electrocorrosive whip – This has some potential and I will piss around and test it at some point, I think it may combo well with a couple of Shardnets and possibly Lelith (Derp star Derp star, we gotta Derpstar) plus she will now be able to benefit from FC and all the drug results. Defo not the best option but not a bucket o bollocks either.

Im not convinced taking any of the wych weapons is really worthwhile. maybe if you are feeling ultra cheap, I suppose you could make a great tarpit with 3-4 shardnets in it , just seems like a waste of her lethal talents.

Blast pistol – yeah, why not, better than buying it for the same price for a lower BS model, plus with two blast pistols in a wych unit thats gonna help with cutting down on numbers when assaulting tough targets and represents a decent chance to pop a transport and assault the contents.

Haywire grenades – For five points you may as well just take em, you will be happy when it saves her from a dreadnought, I’m starting to think EMP’s may be almost mandatory on wyches as its really the only option we have for CC’ing vehicles. And I find EMP is actually pretty good when the target is stunned /immob, blast pistol could help here also shardnets ‘should’ help you shut a dreadnought down to very few attacks per turn, lol

Did I mention value for points ? For a fully tooled out Succy with Agoniser, Blast pistol and Haywires its only 105 points. The main problem Is I feel she will get pushed out in favour of other hq choices, she really is a very good ‘second choice’ hq for most lists and makes a nice cheap HQ or two for a wych theme army.

Lelith Hesperax – Alot of what I wrote about The Succubus applies here,but lelith costs a bucket more  yes she can put out quite alot of attacks, however they will almost always going to be str 3 so colour me unimpressed. She has a 3++ in CC and a built in shardnet she is going to be tough to kill in some games especially as ws 4 peeps hit her on 5’s.

Oddly for a gladiatorial champion she is shit in 1-2-1 combat and shines as a geq unit killer, great ….

She needs drugs …. as a few of the results help with the str problem and/or some rule to represent her anatomical knowledge and experience allowing her to actually wound shit better, other than that, grinding your way to FC is an option I suppose.

I think I honestly prefer the normal Succubus as she can have an Agoniser (hooray for wounding) haywires and a boom pistol and costs nearly half as much with them, even with I think its 10 attacks it actually translates  to very few MeQ kills/ wounds, I think she is going to get her face beat in if she ever ends up in CC with another character/MC. She looks shit on paper, I’ll do some games with her anyway so I can feedback in a retro review in the future.

Dunno what it is with Kelly sometimes, he writes what is essentially a brilliant book with fantastic internal balance and some really great balanced units, the same man responsible IMO for the best non-broken SC in the game, Grimnar. Then he gives us Derpitator and a gimped Lelith Hesperax (Don’t get me started on Plords/Drazhar,) makes me sad, she should have been a stand out character from the book.(reeks of  ‘executive’ interference to me)

Next article is the retro for Shining Spears and maybe some test models for  DE army by the weekend.