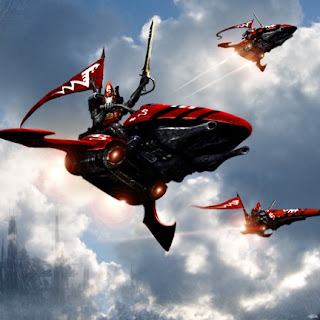 Its that time again, this week we will be discussing that mainstay of all Saim hann themed lists, the guardian jetbike.

In theory these offer you another core choice and allows you to make swordwind armies.

My Usual disclaimer here, I have been working on pure mech this last year, bikes are ok in hybrid mech but dont work with the principals of pure mech due to cost, as we know, the Eldar book is priced on the high side, enter the bikes, they cut into your tank budget and offer a logical target to your opponents anti infantry guns, which are largely not bothered with cover saves anyway.

The crux of the problem with jetbikes is that they essentially have a marine scout statline with increased mobility for 22 points, they can get places but not really do much when they get there……

I mean Eldar jetbikes are fun enough, the ability to turbo boost lends the army plenty of mobility , just be careful how you go about it as assaults are not a good place to be for these little fella’s, the jetbike assault phase move and general mobility is pretty cool and allows for some interesting uses as cover for tanks, blocking,late stage grabbing and sliding out of assault/ double tap range after firing off their guns.

Lets have look at the options.

Well they can have a shuriken cannon for every three models which is actually a fairly nice upgrade as I would tend to run 6’s as a matter of course or 9’s at larger points two or three cannons ups the firepower and threat range considerably, this allows them to threaten most tanks, coupled with their mobility you can work for side and rear armour shots. 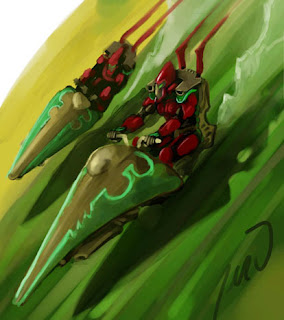 Warlock – yowch expensivo,consider carefully if each unit realy NEEDS that warlock to function. He brings BS4 to the party, oddly and annoyingly he offers no LD boost to the unit …. fail

Even then though its hard not to look at a unit of jetbikes just as a warlock delivery system. He brings a witch blade as standard which means in a pinch the unit can shoot a tank with cannons and assault an armoured target, with his three str 9 attacks on rear armour, my warlocks have massed quite a tally of armour over time, dreadnoughts are fair game as are mbt’s, I would try and steer away from assaulting transports as you are prone to heavy reprisals from the contents.

he can also bring some other things to the table in the form of psychic abilities.

I sometimes like destructor, dooming a target then hitting it with destructor a bunch of catapult and cannon shots and if you do enough damage consider an assault into the remains.

Embolden is handy as it helps with morale and is cheap, enhance is not a good choice here neither is conceal due to the state of the cover system in 5th.

The singing spear is a fairly solid choice and a matter of preference  as it can be thrown from 12″ alongside your cannon shots hits on 3’s @ str 9 (essentially a short ranged mobile las-cannon), makes the unit fairly solid AT / suppression (not that eldar cant do this better and cheaper with other units ) the advantage of the spear over the blade is you still have the ability to slink away 6″ after doing it, putting you roughly 18″ away with any luck. it just depends what you want from the unit as 3 points is inconsequential I would prefer to try and stay out of assault and rapid fire range where possible as jetbikes, given their cost likes neither of those things.