Hello again folks, bit late with the DE review this week as I have been on a bit of a cooldown as I did a bunch of articles in a short space of time this past seven days, including compiling the photo’s for my upcoming Spacewolves Showcase on Mindofthedeamon, and  I also did a feature article for Hop on Monday about paint scheme / palette selection and implementation.

Going to be talking about Wyches today and including the Bloodbrides as they are essentially the same thing. May as well kill to birds with one stone…..
Stats wise Wyches are fairly unremarkable , well in all stats bar one they have I6 which Im sure you will agree is fairly hectic for a troops choice , if you loose a combat to these girls, bad times ahead.
Some people complain about the str3 , I tend to agree with the frustration that a predominantly T4 gaming environment brings , if the balance of armies being played were more even I think str3 would be, well average…. Fortunately there are a couple of things that help the girls strike with a bit more sting than half trained, very depressed human cannonfodder.
Actually it could be worth mentioning the fragility ‘issue’ here too, as it is largely caused by their stats, T3 and a 6+ save out of combat ? Im not going to lie to you, they die horribly if caught in the open or their transport explodes which is alot as DE seem to think manufacturing their vehicles out of an advanced version of nitro glycerine is a jolly good plan …..
One option which you can use to mitigate this somewhat is to start them off with a haemo in the unit, his pain token will confer FnP (assuming you dont get one from drugs) which makes them three times less likely to be vaporized by their own ride and/or most small arms, in this instance it is a trade off though, as in order to have a haemo along you will have to drop a unit member to fit in a raider, which means less special weps and also if you want him moving with them, you loose fleet. So a downside if coming in on foot from a portal, although I guess you can move him away on the turn they arrive leaving the token with them, this has an advantage in that outside a raider you can run a much larger squad, more models benefiting from a pain point is a good use of resources.  Otherwise in a raider squad the should probably just leave him behind if you are not sure they can reach with a standard move + assault, you DO NOT  want to get stranded as your opponent will end them extremely easily outside of combat, plus the haemo can still fly around in his shiny new raider liquifying things and giggling.
Basic stuff that comes in their package includes:
Close combat weapon, pistol and plasma grenades – run of the mill basic kit for a cc unit .
Combat drugs:
hypex look, shoes !!- errr not a huge fan of this one but it does make your run moves more reliable ? I recommend throwing models around and kicking tables when you roll this, perhaps accuse your opponent of rigging the dice …..
Serpentin Sexist comment ! – not terrible, it helps slightly with the ‘hitting like a girl’ problem as you will get more hits on your predominantly ws 4 opponents and therefore more chances to wound it will also offer a little protection from ws5 opponents, so not bad there will be no need to try and knock your opponents models over with dice rolls to make yourself feel better. 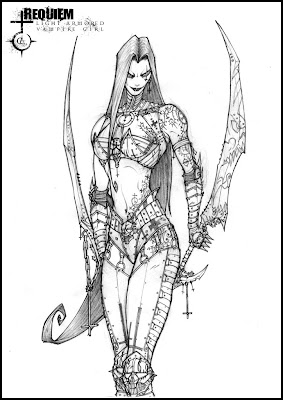 Grave lotus YOU forgot my birthday!- Now they are angry @ str 4 they can also glance down vehicles as well as actually wound t4 FC wyches have str5 with this ;o) maybe not time to break out the special dice and elastic tape measure… some chocolate perhaps ?
Painbringer Crimson tide !- This is hands down my favorite, statistically slightly better chance of wounding T4, and much better on anything they will need 6’s on, also makes for far more stable amounts of wounds generated. Also the agoniser you may or may not have bought the unit just got real ugly. – you are perfectly justified to get those people you hired to come and heckle your opponent to join in on this one , you will no doubt impress everyone and earn the respect and love of everyone.
Adrenalight The toilet seat was up !! Another good one , helps with getting more hits /wounds/kills than you would without. I think you are ok to just note it down and continue here, though snide remarks about Spaze marehnz are always acceptable if unsure how to proceed.
Splintermind Omnomnom chocolate – free pain token , fnp will do nicely , if you already packed your haemo then they will have FC too , but if not, no worries its a short trip to FC and you will loose less girlies on the way. – the dice have obviously decreed your opponent is unworthy cattle, refuse to make eye contact for the rest of the game and only communicate through your ‘mouthpiece’-one of the guys you hired to do cheer routines in the background will do …..
So yeah the drugs can help , sadly they are random , which means I’m tempted to shy away from them in competitive lists , however, wyches do not really perform their function by killing stuff , I mean its nice but not the point to including them in a list , the last and possibly most important thing they get as standard is a 4++ in CC , yup ,a troop with 4++ in cc that costs 10 points per model, nice
At this point you can probably see they wont be killing much of anything in cc, however with a 4++ and the potential for FNP also they are a brilliant tarpit unit, chuck em at some Termies or Twolves etc to bog them in combat, with the addition of some other upgradess they can tie up almost anything for a while . Some people rely on powerful cc units to win games, wyches can seriously hamper that anything with massed power weapons are wasted points on wyches. If nothing else the main purpose of wyches is to blunt the cc effectiveness of your opponents derp stars and main combat units, this allows the rest of your army to go to work, and hopefully if the wyches hold them up for long enough, assuming they eventually die you should often be in a position to destroy the remains of the enemy squad on your own terms.
Upgrades: 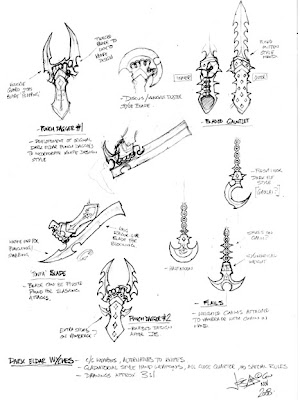