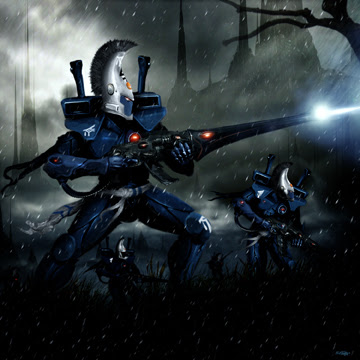 Dire Avengers …. last but by no means least in the troops section, the Dires.

Having erroneously given Storm guardians short shrift early on in the armies development, I went for Dires as the core of my 1500 to 1750 mech list. Subsequently they had alot of play @ 1500 and I was happy with their performance, they worked very well in that build at that points level, however when we shifted up to 1750  there became a problem with the army balance which lead to me having a rough time of it for a while. This was later fixed by swapping out the avengers for stormies, though the 1750 list still contains ‘some’ avengers …….
The main problem with them is the complete inability to do anything at all to armour. At 1500 I had not really noticed this as armour saturation was lower and the dires were performing their specialist anti infantry role admirably and all was well with the world, in all likelihood I will still use them In the 1500 ToS list I’m planning on using this year but feel they do not really work in my 1750 build.
Ok so lets break them down, Standard aspect stats, unlike guardians or even mareehns they come with ld 9 , which is nice, means that the exarch is far from a no brainer choice and often not included.
They are T3 and AS 4+ which is another improvement over guardians, all the usual tricks for keeping them alive apply, which includes a tendency for not having them on foot, personally I think Avengers work best in a serpent.
basic Avenger guns have 18″ range which is an improvement and allows them to shoot largely without fear of being assaulted once you get the maneuvering and ranges down to an art.
Squad options are fairly limited and revolve around how the Exarch is kitted up, the exarch himself costs an additional 12 points (or another avenger) for ws 5 bs 5 I6 and 2 attacks , so an excellent stat line but due to str and t3 is far from earth shattering.
He can buy for himself either an extra catapult with which to go forth and John woo peoples asses into tea strainers, which is nice and cheap for 5 pts, its actually my favored upgrade as I buy Avengers for anti infantry fire hosing , any upgrade that makes a unit better at its given task and is not stupidly over priced makes my grade. a potential 5 shots at bs 5 is nothing to complain about.

Diresword + pistol , cant say I have even ever used this, and the ID on a failed enemy LD check is depressing, I have yet to see it work when used by others. its ten points for a str 3 power wep, not to mention diluting the firepower…. this is for people who have the misguided concept that avengers are sorta failed eldar mareehns and can cut it as a poor mans assault unit….shame as the model looks cool, not as cool as my Chow Yun Fat wannabees, but cool.

The last and most expensive option is a power wep and shimmer shield combo again, Im really not for avengers in assault. I suppose with fortune and the yet to be discussed defend you could run them as a hatchet council tarpit, thing. Broadly speaking though if in cc with someone you are probably dead anyway, fully tricked out with an expensive cc character they can do ok, but a proper assault unit will push their faces in.

Defend: Improved version of defensive grenades, every round all units directing attacks at the vengers looses an attack, sadly its too expensive to just throw in ‘just in case’ and I would prefer to simply avoid combat as much as possible.
Blade storm: At least for me this is the most important power for a non davu squad, you gain a shot by sacrificing the following turns shooting phase, now given guard get first rank second rank over and over for no penalty just shows our books age, but it has to be said three shot str 4 weapons en masse can be suprisingly deadly
And finally of course, they have access to a wave serpent always nice to have ;o)
The DAvu tactic – Dire Avengers vehicle Upgrade, essentially 5 of them ran bare bones is the cheapest way to make something score. Very very often seen in a falcon for objective sitting and late game snatch shenanigans. It also works well in a serpent, only downside being either way its still points sat in vehicles essentially doing nothing. Though it is a very important tactic for Eldar players to master until a new book comes round, it allows us to still win games.
Another common build is five in a serpent with either EML or Bright Aids lance, (long term readers know my feelings about lances in 5th and especially the idiotic pricing in the current book) it hangs back to threaten armour and transports and sit or late game snatch objectives. Ill leave off it here as analysis of the serpent is for a later article.

Other than that much flogged Davu horse I like to run 10 man squads with a twin cat bladestorm exarch’s, they are an infantry hose, the trick is to position them so reprisals are difficult, you can even use their serpent to give them cover/block assaults, a standard bladestorm is only going to kill 3-4 meq’s where a normal volly kills maybe 2-3,so almost not worth considering , however if you throw in guide and doom the numbers start to get quite silly, if you really want something dead use both squads for 64 shots @ bs 4-5 re rolling to hit and wound (guide has taken a bit of a nerf in that it cannot be cast out of a tank onto friendly units in tanks nearby, though it is possible if your farseer Eldrad is with a unit and the other unit is already set up in position, to get guide on both and doom on the target), this is risky so you have to be sure that meaningful reprisal is going to be hard for your opponent to acheive, the sheer number of 6’s/ wounds this can generate can even kill MC’s and do serious damage to anything that is not over av 10, it also cares very little about cover saves, so I’ll happily use the 18″ range to put some cover between the Vengers and the target so in order to assault they will have to go through terrain and any shooting back I’ll get a cover save from.

A tactic that has worked in the past is using an assault afterwards to finish any remaining models off, as you will get maximum mileage from the doom that way, even if you dont kill the last few models you tie them up and avoid shooting reprisals.
Best example I can think of is the time I shot a doomed popup Trygon with a single squad (I think it was guided? must have been…. ) managed to roll a healthy amount of sixes and promptly knocked it down to one wound, as it had only a single wound and was going to charge me next turn anyway I took the gamble, well not so much really, with doom even avengers can roll a few 6’s to wound, quickly running the numbers shows they should do 3 ish wounds. So of course he failed a single save and my Avengers had Epicly managed to rub out a Trygon in a single turn.
Another example that springs to mind is the time I twin bladestormed a Twolf derpstar down to just the wolf lord who was stranded in the open on two wounds and easily shot down, again in a single turn. On the face of things bladestorm is not particularly amazing but being able to stack force multipliers in one place and use your mobility advantage to focus fire on one or a few specific targets allows you to deal very heavy blows to your opponent, as I said at the beginning, this works better for avengers in lower points games as your opponent has less units to recover with, nuking one or two units completely in a turn is much harder to bounce back from especially if the Avengers are going to remain relatively safe to do it again.
The main weakness’ here being that you cannot do it every turn so you need to set up and time it well, it often NEEDS to work or things can go very sour, plus at higher points with more armoured target saturation Avengers are less useful than melta stormies who can smush tanks AND do a good enough job on infantry, three anti tank shots (including spear) the ability to handle dreads in CC, Also destructor + pistols + charge + doom does plenty of damage anti infantry wise…
Overall Avengers are fairly solid choice that requires some skill/practice to get the most from, you will be glad you bought them vs hoard armies. They do fall down compared to Stormies in the currently predominantly mech environment, which is understandable given they are specialist ranged anti infantry troops.
I will be taking 2 units to ToS this year if I can ever finish painting those damn tanks.(see below)