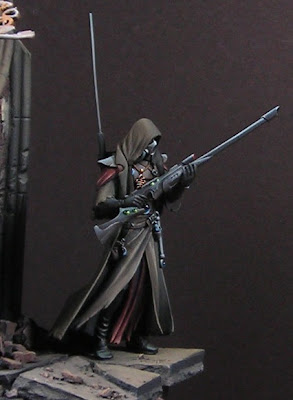 Well thats another first for rant, I spent ages trawling the net to find some nice artwork for this article , to no avail, sad panda. I had hoped to never have to post Mini’s, preferring to use art but its that or nowt, so I guess I’ll Showcase this incredibly beautiful Inquisitor Ranger by Muhani as illustration for this article.

Disclaimer: This unit does not work in a mech army no transport = no good, amongst other things they are too expensive to just ‘throw in’, so I advise to leave them alone if you are interested in pimping your competitive mech.

Right back when I re-started my Eldar I had to grab what I could get together, borrow,scrounge and run with it so I essentially had to go with foot-dar and had inherited a bunch of rangers.

Not long into my early low point experiments I started getting a fixation for harlequins, but found it was impossible to field nothing but harlies, fortunately I found that rangers and harlies can often be seen around each other and have some kind of interaction that makes it perfectly fluffy for them to b in a force together.

They actually made an ideal troops choice for a harly army, Ill expand on that a bit later , needless to say it was a very long time till those battered old models got filtered out of the army to try other things, they had held the fort for me for a very long time while I tested and learned about other sections and aspects of the army, Actually now we are talking about them I’m gutted I sold off the models to fund the MKII kits for my Skimmer spam…

Anyway lets do the usual and start with an examination of the ‘package’ a basic ranger is a fairly hefty 19 points, that is fairly high for a troops choice , stats are unremarkable just a point higher BS separates them from a guardian.

So where is the value then ? well I think they are probably over priced anyway, that seemingly being the theme in this book, what you essentially get on top of that is a more dangerous sniper rifle, infiltrate , move through cover and stealth. 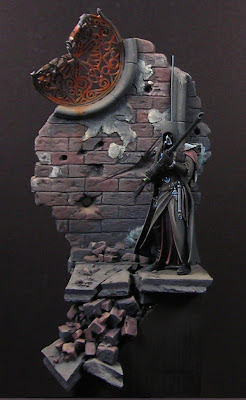 I cant honestly say I really ever find cause to infiltrate them, at least if I do its only to maybe put them in an objective with plenty of distance between them and the enemy, rangers hate CC, and  they hate flamers even more best to keep that in mind at all times.

I don’t often even ever have to move them from where they are set up, so move through cover is far from fundamental to this unit , doubt I would notice if they did not have it.

Stealth is where its at for these boys, any kind of 3+ save is a novelty for elda , Going to ground gives you a 2+ ,as shooting rarely does anything effectual its not such a big deal.

The rifle works exactly like a sniper rifle, just rolls to hit of 5 or more become ap 1, which is nice….when it works ,nothing you can bank on but it does make them a little shinier than a bog standard rifle, anything that makes marines even a teeny bit jealous is a plus, Desperate ? yeah, I’ll take what I can get.

Right things with rangers are fairly simple, ideally you plonk them in cover on an objective or failing that, within a quick runs distance, then you spend the game annoying your opponent with them.

Often as they are largely ineffectual your opponent will leave them alone in favor of higher threat targets, which is fine as you only really bought them to hold objectives , any kills or pins are just a nice bonus.

Its worth remembering that the rifles get two opportunities to become meq killing,on 5’s to hit and also as they are ‘sniper’, rolls to wound of 6 are rending ponies. which means in a pinch you can try and do something to light armour.Its good be aware cover might make it so even if you do a fair few rends etc your rangers will still struggle to kill much, oh well so long as they are still sat on that objective when the fat lady sings.

On the subject of rifles, in my foot dar days my seer would often end up left behind with the rangers , which was fine as they gain excellent benefits from psychic support. Fortune is fairly obvous, 3+ re roll cover essentially means these excellent objective campers will have to be flushed out with fire and the sword, which should mean they have to get through your army. You have to admit that there is value in a unit you use specifically for holding objectives being nigh impossible to shoot off said objectives. If your opponent really goes for it and foolishly tries to torrent them out GTG for a 2+ re roll save, its belly laugh time.

The biggie is doom, “why ?” you ask, well doom does not just let you re roll failed to wound rolls, oh no no no, its much better than that, It allows you to re roll to wound, essentially this means, if you want, you can pick up and re-roll even successful rolls to wound, “but why ?” you ask. The reason you would do this is to effectively almost double your chances to get rends, nice huh ?  this works on other stuff in an army that would contain Rangers/rending too.

I will talk about that in a couple of articles time. Something that frustrates with the rule that gives you AP1 on 5’s to hit is that you need a 4+ after that to get the benefit and often ‘loose’ any ap1 hits you managed to get, doom helps with that, doom makes them much killier their range allows them to engage enemy units you have doomed for other reasons and put some gimp on them, you my even get lucky with the pinning which helps if you are short on an assault once every 100000 games or so, lol

In the same breath they benefit from guide also as the re rolls to hit will not only give more hits overall and more 5+ ap1 bonuses but more hits = more chance at rending , it kinda snowballs , so if you are feeling extravagant, pop two units 6″ apart with Eldrad in one unit on the wing nearest the other , cast guide on both units and doom on a target and away you go , that can put alot of ap 1-2 down the pipe ,  MC’s and Meq out of cover do not enjoy that experience, even in cover they may be forced to opt to GTG. 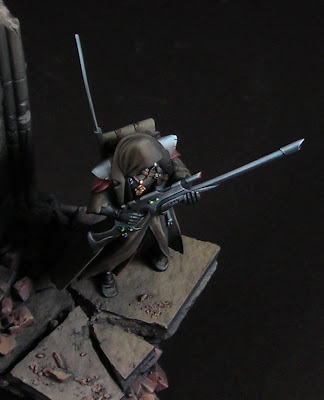 The final option available to them is to upgrade to Pathfinders for 5 pts which upgrades them to ignore cover for movement (not really interested tbh) and increases their stealth by a point so that they have a 2+  save stood up in cover, its fairly nice to get a 2+ cover save, but normal rangers can do that with GTG, pathfinders have no extra dakka, so to be honest I have never seen a reason to take them, especially as in practice there is no real difference. They are really expensive @ 24 points for what is just an objective camper troop with weak killing power, its just not points wisely spent, as you only need smallish squads to hold objectives and as that is all they are there for, just keep them cheap so you have more points to flesh out the real work horses in your list.

Just for general information, running two units of six seems just right in my harlequin list, its enough shots to do something, whilst not having too few bodies as  long as you are happy to GTG, they have a nice small footprint and most importantly not too expensive.

So… a unit thats not optimal in a mech build, thats a bit overpriced with limited killing power took a further hit with 5th cover, but on the plus, they make excellent objective campers that can be like roaches to get rid of. They have some great synergy with hybrid and foot lists, especially Harlequin builds. They can be very irritating for some opponents and its always fun when they shoot an MC off the table in one phase or pigs fly blow up a transport.