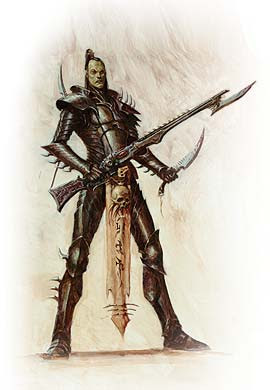 Well Funt me ! That was fast for GW, a solid round of baby kissing from the intergalactic plastic crack peddlars today, good show chaps !

lets have a quick look at the more important stuff maybe see if there is anything to be exploited. There is a fair bit of clarification of the obvious in there.

Q: When a unit comprised of some models with Power
from Pain and some without destroys an enemy unit, does
the unit gain a pain token? (p25)
A: Yes.
So I got excited here, I thought wow, beasts are truly going to be super mean and harlies just might be viable….
Then they put this

Q: When a unit comprised of some models with Power
from Pain and some without has a pain token, does the
effect it gives apply to every model in the unit or just to the
models with the Power from Pain special rule? (p25)
A: It only applies to the models with the Power from Pain
special rule.
While being a little sad faced this does make sense.
This is an interesting one for me and could be considered a nerf as I was under the assumption you could boost any damn direction you like if you are willing to forgoe the cover save , this (I think) will stop the move 18 to just about touch an enemy unit then fly 18 more or less directly back shenanigans, now its pretty much A to B stuff under can be hit. A small nerf ?
Q: How do you mark the start and end points of a unit of
unit of Reavers move when they are using their special
Bladevanes attack? (p29)
A: Should confusion arise, simply pick any model in the
unit as the start point and mark that spot. Then move the
unit and pick any model as the end point. One unengaged,
non-vehicle unit under the line between the two markers
can then be chosen to be the target of the attack.
Yup , she still sucks something terribad.
Q: Lhamaeans confer their Mistress of Poisons special
rule onto the Archon they belong to. When do I nominate
which Court of the Archon belongs to which Archon? (p35)
A: You should nominate which Archon each Court belongs
to at the start of each game. Archons with a Court that
includes one or more Lhamaeans will benefit from the
Mistress of Poisons special rule.
Although this kiinda makes sense the original interpretation of the rule went some way to explaining the mind bending cost of an Implosion missile. Can safely say I will never ever EVER use them.
Q: When an implosion missile hits a complex unit (one
where all the models are not identical in gaming terms)
how do you work out what rolls are needed to wound and
how do you distribute these wounds? (p47)
A: Although the implosion missile causes wounds in an
unusual way it should be treated the same as any other
blast weapon. A unit will suffer a number of hits equal to
the number of models underneath the blast marker. Using
the majority Wounds value of the unit roll to see how many
wounds are caused and then allocate these in the usual
manner.
Okay the following was make or break on the Void Raven for me , thank god they made good *victory jig* Still frankly a highly underwhelming weapon to be classed as ‘the dreaded’ still no clarification as to weather you get cover or not /how it is worked out …….
Q: Can a void mine be used regardless of the speed the

Voidraven Bomber is moving at in its Movement phase?
(p47)
A: Yes.
Boo hiss, blatant nerf , ID rule itself is quite clear on the subject.
Q: When using Asdrubael Vectʼs Obsidian Orbs or the
Orbs of Despair, do you use the targets Toughness or
Leadership for the purposes of working out if Instant Death
applies? (p55)
A: You use the targetʼs Leadership
Now this really pisses me off , its taken a big nerf from last edition as it is, we are now in an edition where melta/AT is positively coming out of people ears so they make it softer ? with no access to some of the useful upgrades ….., pretty much means I wont be fielding it even for fun and wont likely buy one if GW releases it, 200 points for what exactly ? mounded pile of fail, 200 point handicap. yeah the high lord of Commoragh himself can’t bling his pimpwagon ?


Edit: Apparently the french version has Aerial assault and was not removed in the new faq , now THAT I might pay 200 points for.
Q: Can the Dais of Destruction take any of the vehicle
upgrades available to Raiders? (p82)
A: No.
Things I would like to have seen were the absence of tormentors being explained or rectified, also sliscus’ deep strike still differs from retrofires and needs clarification.
Its early days yet so I expect more questions etc will feature in 1.2 faq . Also to note Mr Kelly has an article on playing with DE in WD this month , as its written by the guy that designed them I would say its worth a look.
In funny shit this week, Warseer …..

Coming up later this weekend , Rave Review for Trueborns