Ok These guys have been contentious even from before the book came out.

People seem fairly divided by these consisting of the “My god what suck is this ? ” and the “They are ok and can be made to work” camps.

Im right there in camp number one, I really think they blow, they annoy me with their sheer crapness, the rules are so godawful that GW has insured irrespective of how tasty the models may or may not be I shall not be owning/painting any time soon.

Best use I can think of If you have bought some, wracks ? ….

Okay so I suppose the above is a pretty sweeping statement, so I suppose i will attempt to break down the squad and justify my feelings.

Stats, cant complain too much STR4, I5 with 2 attacks fresh outta da box, 15 points is a bit heavy for a T3 model no matter how you shape it ……

The squad can have a Nightfiend for an extra 10 points , annoyingly as with the incubi there is no model for this supplied with the box, poor show really given that the older aspect warrior boxes all contain a suitable exarch model, Hopefully GW will rectify with a later blister release…… hopeful much ?

He gets an extra attack and brings LD 9,  so as I imagine they are shaping up to only be remotely useful as objective campers it will be a worthwhile investment to prevent them fleeing from shooting casualties.

Thats it for him, exciting huh

They all come with a single cc wep as standard, making their cc ability borederline underwhelming, oh yeah NO GRENADES ?!

Infiltrate , uh yeah , I just dont know how useful this is on a unit forced to stay in cover to mitigate its t3 and lack of grenades, will help with setting them up somewhere they will get cover I guess , as for outflanking, dunno I don’t see it working on anyone with a brain, no meltaguns no flamers and no grenades, T3 , sounds like suicide 101 to me, suicide is acceptable if a unit is going to do something in the process (melta) I just see them being shot up and beat up by meq badly and vs geq they may get the jump on a unit or something then die horribly to counter fire , hardly a good exchange , they have to be the worst setup unit to really get any benefit from outflank in existence.

Power from pain , this is a bit of a conundrum for manderps as to get it they need to kill something , to kill something they will have to leave cover and then likely die so thats not going to work, they could use their bale blast to finish something off , oh wait,  you need that first token to get their pointless shitty gun too …… So you are pretty much forced to put a haemo with them to make them actually difficult to shift from cover with shooting a flat 3+ cover save on t3 is not that great really when you consider a basic meq is harder to kill with standard weapons, the fnp tips the balance and makes them actually hard to kill with torrent, course they are pretty shit vs meq in cc so you could just assault them. they need to be the ones charging to really do anything approaching effectual on meq (sadly the game standard), again they need their silly gun attack to really be rolling enough dice to do much , just charging a unit of tacs is only going to net you 2ish kills before they beat your t3 5++ ass into the floor, if you allow for a round of shooting from the bale Failblast your total kills for the turn will crawl upto 4-5 which should just about tip the balance so you should eventually win the close combat…. Furious charge will help but I can see actually getting it being a struggle for them. 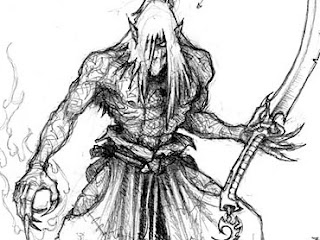 I think maybe the intention for them is to use move through cover to charge stuff that strays too close to the terrain they will be forced to hug, weakened units are going to be par for course.

I just cant work out what the hell they are supposed to offer an army, especially given that they are another elites choice, Just look at the other stuff in elites ? are you really ever going to sacrifce that to take this tripe ? they are worse than the troops choices…..

I honestly cannot see a way they are ever going to be useful and getting them to be worthwhile is too much of a faff for competitive play,  If they were troops I would consider them for camping duties,  currently they don’t even score, I suppose contesting ? god knows what Kelly intended for them Either he ran out of ideas or this was one of the units ‘fixed’ in the re-write.

Bale Failblast- It would actually be alright if you did not have to essentially jump through burning hoops to have it , if they all got flamers as I thought they would from the description I would understand the need for the pain point , but the gun is underwhelming, ap 4 as we know is pointless 99.99 percent of the time as is pinning, they are just poor mans pink horrors , I would rather have bloody pink horrors. To have any hope of starting with some use from it you have to fork out yet more points to get a haemo, which should really be factored into their cost, so 50 points minimum for a heamo = essentially 20 point mandrakes: supping from the fail pail :oS 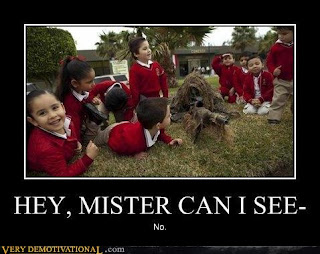 Stealth- I forgot to mention this early, yes the shadow deamon-things are exactly as stealthy as a man draped in a bit of unwashed green cloth, a + 1 cover save is nice enough and they do get a 5++ too which is better than a poke in the eye with a sharp stick I suppose, as I said poor mans horrors.

As we are on the subject I’ll discuss the Derp-Crapitator  here too, he sure puts the ‘special’ into special character, best thing about him is the background fluff and the artwork, for an HQ slot and 140 points you get a t3 character with no armour save and a 5++ ……. he cannot even join a squad, has a Marbo style derp-loyment, but is so ‘special’ that he cannot assault the turn he does and unlike Marbo does not have a decent ranged attack to drop the turn he arrives either…. he does have the failblast.

Hunter of heads – An ability that lets him get pref enemy vs one enemy IC, how he is supposed to get there let alone actually kill them when he gets there is beyond me , he also has NO fething grenades either.

He would be fine just the way he is if you was an upgrade for a mandrake unit and maybe made the scoring, I would ‘consider’ using him then, as he is currently he is a hot contender for worst character in 40k

Other than the usual manderp stuff he has a powersword that does ID on a roll to wound of a 6+ woopity doo ….. I rolled a bunch of test dice, against chars without an invun (they even exist ?) he can have a tough time vs them, let alone someone with a decent save,  Furious charge makes him hit harder on the charge, but again , getting a second pain point and somehow getting into cc with his chosen target who hopefully has no invun seems incredibly hopeful….

As much as overall the books internal balance is about right I just don’t know what went wrong here, yet more things that make me question GW’s design process,or lack thereof … Do wonder if they got the now infamous late stage ‘edit’ Xeno nerfbat.