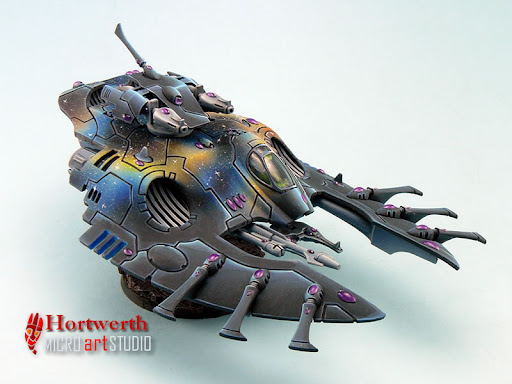 Time to write about possibly the most important tool in the true mecdar list. Defining why it is important is fairly simple , It gives Eldar some real resilience and a definite edge vs most armies in terms of raw mobility.

Apparently there is no decent art not one single piece in all of the interwebz so forgive my grudging use of mini photos – however it does allow me to showcase some work I think deserves some exposure.

I’ll start with the few negatives it has. In a direct comparison with the pricing trends for transports in 5th it is over priced especially when you consider its pointy eared contents (at time of writing) are largely over priced. It could probably do with a five – ten point drop and having the twin linked Shuricannons as part of the standard price.

The over pricing is compounded by the cost/effectiveness of any weapon upgrades , in fact the vehicle upgrades just push the price even higher into the stratosphere.

Currently at its most cost effective IMO, I run it with Tl shuricannons and upgrade the nose catapults to a second cannon, thats a 110 point transport ….. ouch. Thank Feth its arguably the best ‘basic’ transport in the game. I’m not sure its quite worth that many points but at the moment its all we can have and gets the job done.

12-12-10 armour means it is very resilient for a transport, even chimeras suffer from av 10 on the side, there are other factors that make serpents even more resilient, the rear armour of ten is essentially a non-issue as your superior mobility should make it nigh impossible for opponents to take advantage, if your opponent has deep strikers or flankers just keep a mental note of that and remember to put the rear armour against terrain or a table edge or back to back with another serpent, honestly I struggle to remember ever having a serpent shot in the rear.

Its a fast skimmer and a tank, this opens up many tactics to your army and gives you powerful tools such as  long range tank shocks, objective grabbing, potential str 10 ramming and blocking enemy movement and assaults, flat out mobile cover/walls. Serpents really do make great blockers and have the mobility to be very ‘inconvenient’ most of this stuff does not require a serpent to have any guns left so I often find myself getting creative with empty and gunless serpents, use your imagination a bit and it will become apparent that the wave serpent is so much more than just a simple transport. 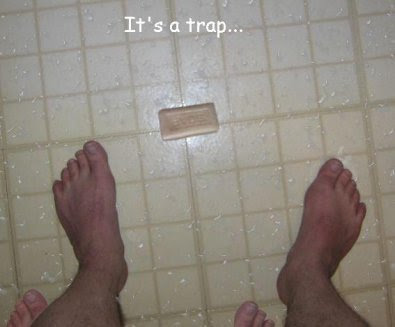 The very best thing about the serpent is its energy field, this baby has taken a bit of a boost with fifth as people are so reliant on melta for AT, the force field does two great things, note: these only work in the front and side arcs so pretend the battlefield is like a prison shower room.

The first effect stops enemies weapons having a str higher than 8, ever, got railguns ? cry me a river…… the second effect stops enemies ever having better than a single dice to penetrate,  an often missed aspect of this rule is that alot of people assume it just nerfs the second melta dice, which in and of itself would be funky, but no, this force field has so much more to give, it stops ordy getting two dice to pick the highest and makes rending not work, couple this with the potential for a fortuned flat out save and its arguably (circumstantially) the hardest transport to crack in the game, far more elusive and frustrating to kill than say a landraider, even the most powerful AT weps are going to need a 5 to penetrate.

I would always always recommend replacing the catapults with a cannon, massed str 6 is another of the strengths/hallmarks of mechdar and is a tool well worth the having, is also helped by being the nearest thing to cost effective you are going to get with this books pricing conventions.

As for the Tl top weapon, its worth mentioning that a TL bs3 wepon is actually statistically more accurate than bs4 so serpents are also one of the few ‘accurate’ platforms in the book. The only problem being that with only a couple of upgrades and what passes for a mid priced weapon you are looking at well over 100 points for a single transport.

TL Shuricannon – best buy in my humble opinion, cheap and effective, with the nose gun upgrade you will have 6 str 6 shots, which is pretty respectable for a transport, it can also threaten all but the most heavy of armoured targets , especially if it has weaker side and rear facings, you can use the serpents mobility to hit their weak facings far more easily than with other vehicles. so it offers a degree of duality, also with doom thrown in most MC’s disappear  in the hail of str 6 a few serpents can generate. the range is a little short but as you will be tight on points most of the time it is often going to be your best bet, as the vast majority of carried units have a very short area of effect unless you are camping home objectives the short range is hardly an issue. 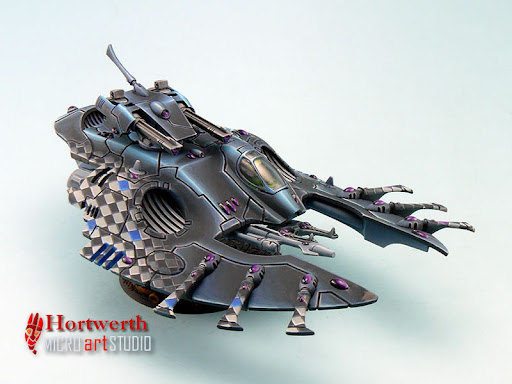 Tl Scatterlaser – A popular choice, sadly not for me as its a whopping 15 points more for a single extra str 6 shot over the Shuri’s, it does make your cruising speed shooting slightly more powerful and the extra range can be nice from time to time but honestly the price is too high for what you get, I honestly do not believe it to be a cost effective choice as in game they barely feel more effective than a shuricannon while 1. pinching already limited points and 2 making an expensive transport even more so for little real gain.

Tl EML – The EML is actually a pretty good weapon , it offers duality an improved (ap and pinning) frag missile and more importantly for an eldar army in 5th, ‘accurate’ and long ranged armour suppression and transport cracking firepower, which the army lacks to a painful degree. I have found getting side shots to be fairly straightforward with serpent mobility so I feel it to offer slightly better value than the scatter , it is however , still overpriced and I have not been able to squeeze any into a sub 2k list over  the raw cost effectiveness of the shuriken cannons.

Tl Starcannon – Recieved the Xeno nerfbat and has yet to recover, 35 points for a weaker plasma gun equivalent makes me weep tears of nerd-rage. A great choice If you wish to be mocked as an imbecile and have cabbage and rotten eggs flung at you in the street. 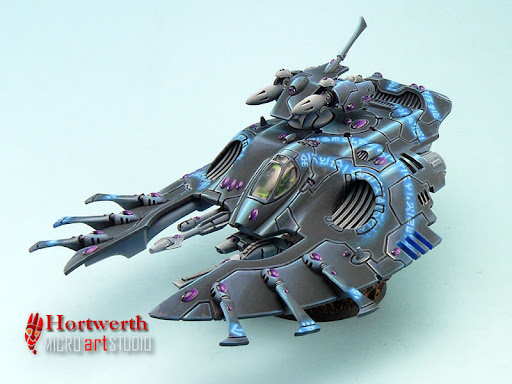 Bright Aids lance – not only do Eldar apparently suck at making plasma weapons they also get to play second fiddle to Imperials for laser weapons too, this steaming pile of baboon stool  is so over priced as to be comical, in most situations this is WORSE than a lascannon , and AV14 duties are for fire dragons, not only is it over priced to the point of being an excellent parody of the british car insurance industry protection racket, it has no place in the army as a missile launcher offers duality and does the same job on 90% of targets for near half the price, lances are also fail in 5th, I run many more lances in my DE army and its an exercise in frustration to put it mildly. Given what has happened with lances in the DE book don’t expect them to improve markedly in availability, effectiveness or price when in the grim darkness of the future E 5th edition swings round.

Vectored engines -over priced pointless junk IMO, they are only useful situationally and 20 points is far too hefty a price tag.

Star engines – open up yet more mobility based shenanigans including going stright to your opponents dep zone from reserve, and makes Eldar tanks the very fastest in the game, even DE are slower as their equivalent only adds 2d6 instead of 12″ flat, however as your serpent  is already highly mobile and already over priced I have to advise against taking them competitively.

Spirit Stones- are worth a look as they protect you from getting insta smashed in combat and help insure you can put certain units in position when you need them there, positioning and timing are key with ‘Dar’ of all types, having said that I don’t run any to save points, they are well worth considering on key units transports IF you have some points spare, some people swear by them but most games I dont honestly miss them and am far to tight for points to put them in.

So all in all a gold star for the Mechdar workhorse, slightly fouled by some plain bonkers pricing/weapons nerfs, not that the problem is localised to the serpents by any means but a strong flaw within the current dex. ‘The’ most important vehicle in the book so well worth getting to grips with, I went pure mech a year ago and cant recommend multiple serpents highly enough. Dragons may be the best unit in the book but how good would they be without a serpent ?