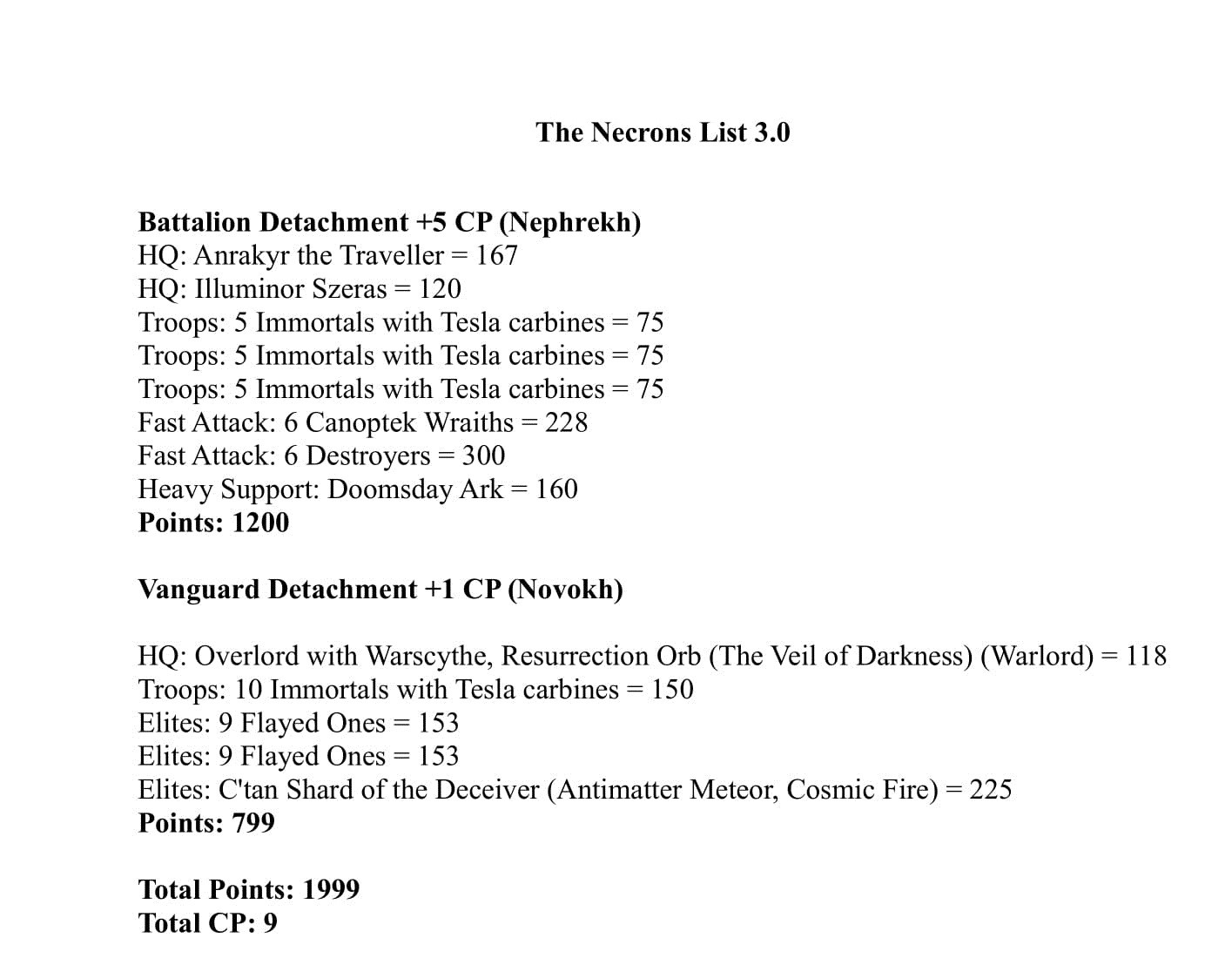 My thirdgame with the Necrons was an impromptu meet up with friends with two tables for 40k and a TV for Smash Bros for everyone else. A fun laid back environment typical of the average Warhammer 40k experience. I had the joy of playing my friend Michael and his beloved Dark Angels. This was Michael’s first game with Dark Angels since Chapter Approved 2018, but most importantly he was trying out some of the new Detachments from the Vigilus book including the Beta Bolter Rules.

I had a slightly toned down list from my last game and was eager to see how effective two units of Flayed Ones would be, this though meant I only had one Doomsday Ark and as you can see from Michael’s list below this looked to be a problem… 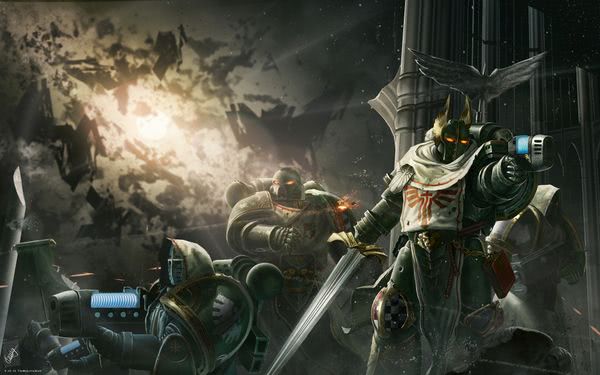 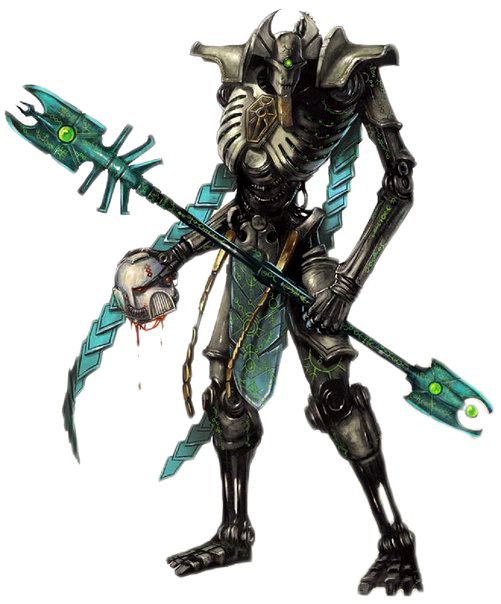 TACTICALLY— I had to make a choice of between going after the Dark Talons or not, because to take one down I would need the combined fire power of almost my entire army just to take one down. So wisely I decided to just take whatever beating they were going to give and focus on killing everything else. My army was also decidable slower than Michael, so I put as many units in Deep Strike as I could in the hopes of pinning Michael where I wanted him.

The fringe benefit of having my Flayed Ones in Deep Strike, was seeing if this was effective way to use them, even though Necrons don’t have any way to make 9″ charges better on the drop. By avoiding the Dark Talons, my main goal became destroying Michael’s plasma capacity as this would pose the biggest threat to my survival with all the multi-wound models I had. This meant the Black Knights were first target on my list, followed by the rest of the plasma bike squads. So with half my army in Deep Strike and Michael with what I hope was no good targets, we rolled for 1st turn.

FIRST TURN — couldn’t have gone much better. It started off luckily enough with me losing the roll off, but then rolling the 6 to seize the initiative! As usual my Wraiths were positioned for a 1st turn charge. Michael had screened his army with the Black Knights, much to my delight. I was also able to use the line of sight blocking terrain to make sure the charge went off without Overwatch. As for the rest of my army, I moved things around a bit and position the Deceiver in the center of the board. I look some random pot shots, but with the Dark Angels castled up, I knew it was only going to be the Wraiths time to make a difference. The Wraiths got the charge off and obliterated the Black Knights and piled into another Bike Squad. On the Dark Angels first turn, predictably it was about operation destroy the Wraiths. It was also at this point I realized maybe my army wasn’t prepared for the type of damage a very competitive Dark Angels list can deal.

It took most of his army, but the Dark Angels were able to kill off the Wraiths with the help of some plasma power and me failing one too many 3++, if I had rolled only slightly better this would have prevented the worse part of the turn. The Deceiver went down to hail of fire as well, because Rift Cannons you know can do a lot of damage. I was also slightly out of place with my 10-man Immortal unit leaving me exposed to another Dark Talon and its Bolter Drill fire power.

Turn 2 would be critical as I brought the rest of my army down to make this a game, I decided I had to split the Dark Angel’s forces if I hoped to have a chance. I placed a unit of Flayed deep in the Micheal’s backfield and the Destroyers on the same flank. The other Flayed Ones took up the center of the board and another squad of Immortals to my deployment side. The Destroyers did the predicable and destroyed another bike squad and damaged a second one. My Immortals took out some Scouts and the Doomsday Ark did nothing. The biggest win though was, the Traveler taking over a Dark Talon Rift Cannon and blowing up the Talonmaster in one shot! My turned ended, not unexpected with the Flayed Ones failing their 9″ charges, but were safely in cover for 2+ saves.

On the Dark Angel Turn 2 I had a bit of luck as the shock of losing the Talonmaster sent the Dark Angels scattering with Michael flying his forces apart to deal with various threats. At this point Michael’s Dark Talon Rift Cannons also started to fail him and Necrons making my saves against them. He was unable to delete the Destroyers. The Dark Angels were only able to destroy one Immortal Squad, but other than that I was feeling pretty good about my position.

Turn 3 was a good one for me, but I failed all my reanimation protocols, which was a harbinger of things to come. The Destroyers killed off another Bike unit, followed by Immortals finishing off all but one Scout squad. Then my Flayed Ones came in, killing off the last Bike unit and the Dark Angel Librarian. On the Dark Angel half, Micheal did the right thing moving his remaining forces to my original deployment, killing off two Immortal units and Anrakyr.

Turn 4 was the decisive turn, with me once again failing all my reanimation protocols. I finished off the last Scout squad, but was out of position to everything else. Conversely, the Dark Angel turn was fantastic, with only Sammael, the Dark Shroud, and 3 Dark Talons they were able to kill off the last of my Immortals, the Destroyers, Szeras, and the Doomsday Ark, which failed every Quantum Shielding rolls.

Turn 5 & 6 was about me hiding, while I made 2+ saves against Dark Talons. Smartly, Micheal kept the Dark Shroud and Sammael away from my flesh eating reach leaving him with a win, in a fun and bloody game.

In retrospect, I certainly could have done things a bit differently, like being more conservative with the Deceiver, who if I thought about can actually destroy Dark Talons. I also used Veil one turn too late, if I had done it turn 1 or turn 2, I could have saved an Immortal unit and maybe deleted a Plasma bike squad a turn earlier. I also learned that taking 1 Doomsday Ark is just too variable, unless you play it aggressively, which I could have in this game. All in all the Flayed Ones continue to perform very well against anything that doesn’t have a 2+ save and the usual suspects like Destroyers and Wraiths continue to get the job done.