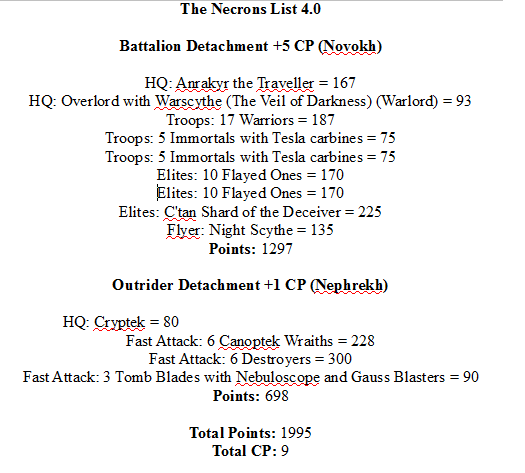 My fourth game with the Necrons was a little over a week ago and I got to play my friend Shayne and his Ad-Mech. Shayne is trying to figure out a good competitive Ad-Mech build, and I felt it would be a good idea to give him some help to work out some kinks.

I went with a more casual list, I wanted to see more of my painted models on the field and I felt Shayne needed easier time after a bad run of games he was on at the time. This would also be my third game Ad-Mech in 8th edition. so a chance to play them with the recent buffs was going to be at the very least educational. 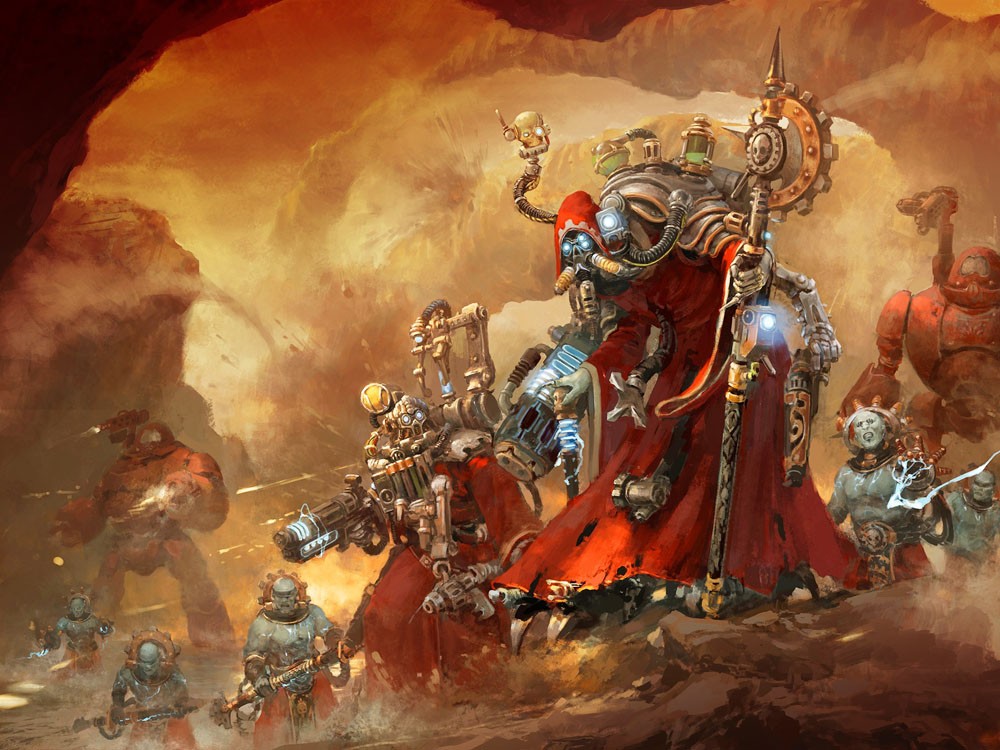 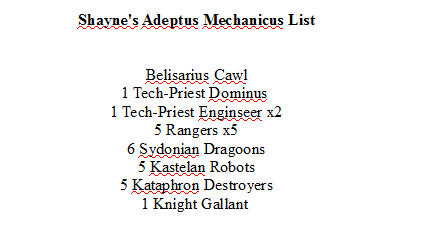 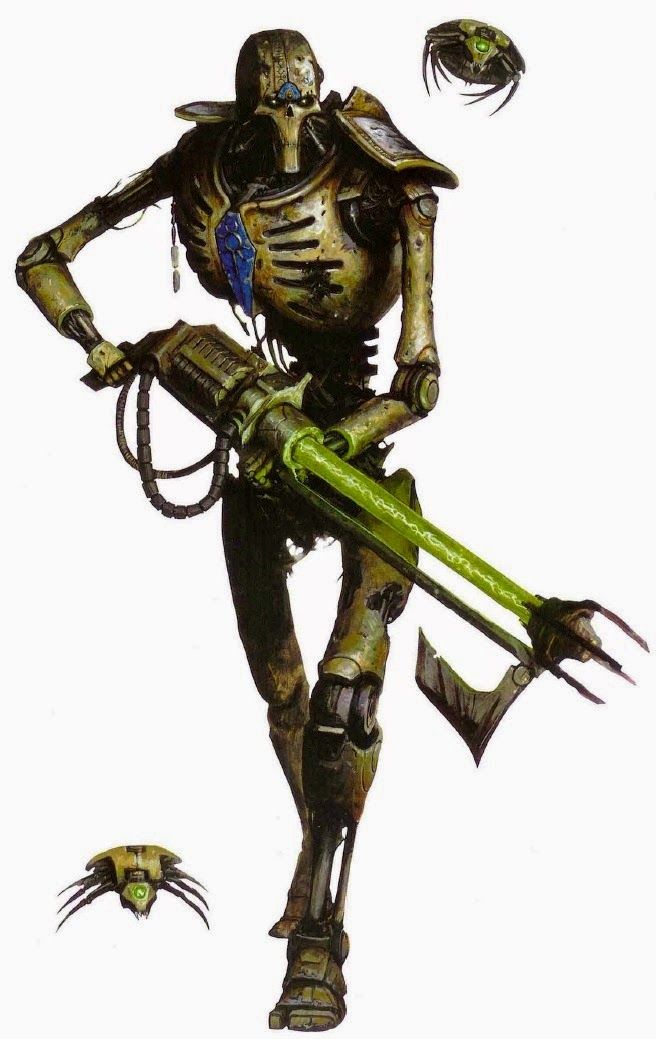 I chose not go after the Knight, I just couldn’t let the Robots and Destroyers pick my army apart while I tried to down the Knight. There was also the problem of the Dragoons who are the perfect foil against my Wraiths with S8 and 2D lances.

I repeated my typical deployment of fainting units out range of his the most deadly weapons, while being able to capitalize on if I got first turn with the Deceiver. I put the Traveler and 1 unit of Flayed Ones in the Night Scythe and hide my Wraiths behind LOS blocking terrain. I put the Destroyers in Deep Strike as well and positioned all my troops far back as possible while holding objectives. I felt pretty good either way about going first or second, as Shayne’s threats wouldn’t be able to strike on turn one, while I could react to whatever he did.

FIRST TURN —  I was survived the seize and went first. I moved up everything and had the Deceiver do what he does best, bringing the Night Scythe in position to drop its payload. Shayne made his first mistake by not using the Stygies pre-move on the Dragoons to bubble wrap his Destroyers and Robots. Lucky for Shayne though I would make a blunder that most likely cost me the game in the end. I was able to charge Shayne’s army without taking Overwatch from behind terrain and sent the Wraiths into the Dragoons as I wanted to at least do some damage, before I would tested to roll tons of 3++ saves. I also made the mistake by Veiling my Warriors up to just shoot some Rangers, when I should have waited one more turn with support of the Destroyers.

In the fight phase the Wraiths rolled terrible by only killing one Dragoon and they waited for retaliation. As for my Flayed Ones though they did amazing halving Shayne Kataphrons. My critical mistake though was the Traveler, he ended up blocking my Flayed Ones when I had them strike twice, this was compounded by the fact he didn’t wound any Dragoons with his attacks. If I had been able to get my Flayed Ones through a gab, I would have been able to tag Shayne’s Robots and lock them in combat for the first turn, forcing Shayne to use his Knight to kill the Flayed Ones instead of killing my Warriors. I still was able to clear the Kataphrons and made enough saves to keep the Wraiths alive for another turn.

On Shayne’s turn he was able to kill my Warriors with his Robots and use the Knight to clear the Flayed Ones and the Dragoons finished the Wraiths. The Traveler at least took out one Dragoon in the process. On turn two, I dropped down Destroyers and Tomb Blades, I positioned the Destroyers out of LOS from the Robots while having clear shot at the Dragoons. I pulled back the Traveler and went bold with my second unit of Flayed Ones, hoping for a charge into Shayne’s Dragoons as the Knight blocked my way to charging the Robots. I got a bit of luck as the The Destroyers and Tomb Blades combined to destroy the Dragoons. This though meant the Flayed Ones were out in the open to the Robots. I did though get an assist from my Overlord, as he made a long charge and took out a Tech-Priest and finish a unit of Rangers.

Shayne’s turn 2 had him using the Robots to destroy my other Flayed One unit and the Tomb Blades. Shayne also Heroically Intervened with his Knight on my turn to kill the Traveler and then piled into the C’tan. My Overlord hiding in terrain and protecting a objective forced Shayne to bring his Dominus and more rangers to reclaim it. I failed one too many saves as well and the Deceiver fell on Shayne’s turn.

Turn 3 was looking pretty bleak, but the points and positions of the armies, I was actually winning. The rest of game would come down to Shayne could have the Knight track down my Destroyers or if they would kill it first. Shayne on his turn 3 killed the Night Scythe with the Robots and brought Cawl to deal with my pesky Overlord who was still putting the hurt on his units. Shayne also missed the first of his charge attempts on my Destroyers.

Turn 4 I took off more wounds on the Knight and on Shayne’s turn he killed my Overlord and the Knight got off a 9inch charge to engage my Destroyers, luckily he only killed 3. So on my turn I disengaged the Knight and brought it down to 3 wounds. Turn 5 was the same play again as Shayne could only charge the Destroyers and this time did exactly enough damage to wipe the unit. This won Shayne the game, a game that was way more competitive than I expected it would be.

If Shayne had remembered to screen his units on turn one, I don’t know if even the combined assault of the Flayed Ones, Wraiths, the Traveler would have killed the Dragoons, but my misplacement most likely produced the same outcome if he had screened. I was surprised how much damage I put on the Knight with just one Destroyer unit and a few Tesla pot shots. If I had held my Warriors I think that could have made a difference as well, if they got one round of shooting to finish off the Knight at the end of the game especially. Shayne played well after his mistake, by taking advantage of my bad unit placement and having the Knight run through more units than it should have in the early rounds. It was a fun game and learned sometimes not to be so scared of Knight even if you don’t use three Doomsday Ark.