Week Five was actually more than 3 weeks ago, was damn too busy to get this post up. Either way I did it, instead of taking my sweet time to paint just eight models left I just knocked them all out at once!

That means I done! I had fantastic time repainting an old Night Scythe and less fun with the Deceiver. The rest of models were the Overlord, Anrakyr the Traveller, Illuminor Szeras, and finally three Scarab bases. The Night Scythe was a repaint job, as was the Overlord, while everything else was primed Leadbelcher and ready to go.

Lets start by talking about my favorite, the Night Scythe.

The Night Scythe was the largest impediment to getting to the finish line, and it was deciding which sections to start painting becoming the most daunting. With the help of the videos above I was able to focus on exactly how to apply the white over the blob of silver that was the old paint job. I went with a heavy dry bursh layering approach after re-base coating with Celestra Grey. The red I did the same. by following the same color pallet as the other Novokh units. Time was saved as I left the guns and engines silver, but now used drying brushing to give a more worn look. I used Nuln Oil to fill the lines with a thin brush completing the model.

The real devil left as the Deceiver who, I had enough of the stock jester head and replaced with a head from the Nighthaunt Age of Sigmar line. I decided to give the wraps a torn bloody flesh look, while doing the typical bronzing for the rest of the model.

““In nature, dead trees are just as normal as live trees.”
― Bob Ross

Now that I had the Night Scythe and Deceiver completed, I dove right into the characters. The Overlord was another problem, as it was badly painted from a previous owner, but luckily there was a lot of unfinished metal to work with. I used the Overlord video above as a guide, without going super orange along the way. The end result was better than expected. Finally, for Anrakyr the Traveller and Illuminor Szeras I had to juggle keeping their distinctiveness as independent entities, while maintaining the look of the rest of the army. It meant focusing on the metallics, I still had to bring some red in and I did it as muted as possible to blend in with the more bright components of the rest of the army.

This left the Scarabs which were a breeze, by following my Nephrekh paint scheme. With all the models done, I was left doing the  most hated aspect of the hobby: BASING! I got my template down in the last article, so with lots of dry brushing, blood pools, and 100 Necron skulls later, I had completed my 2k Necron project! 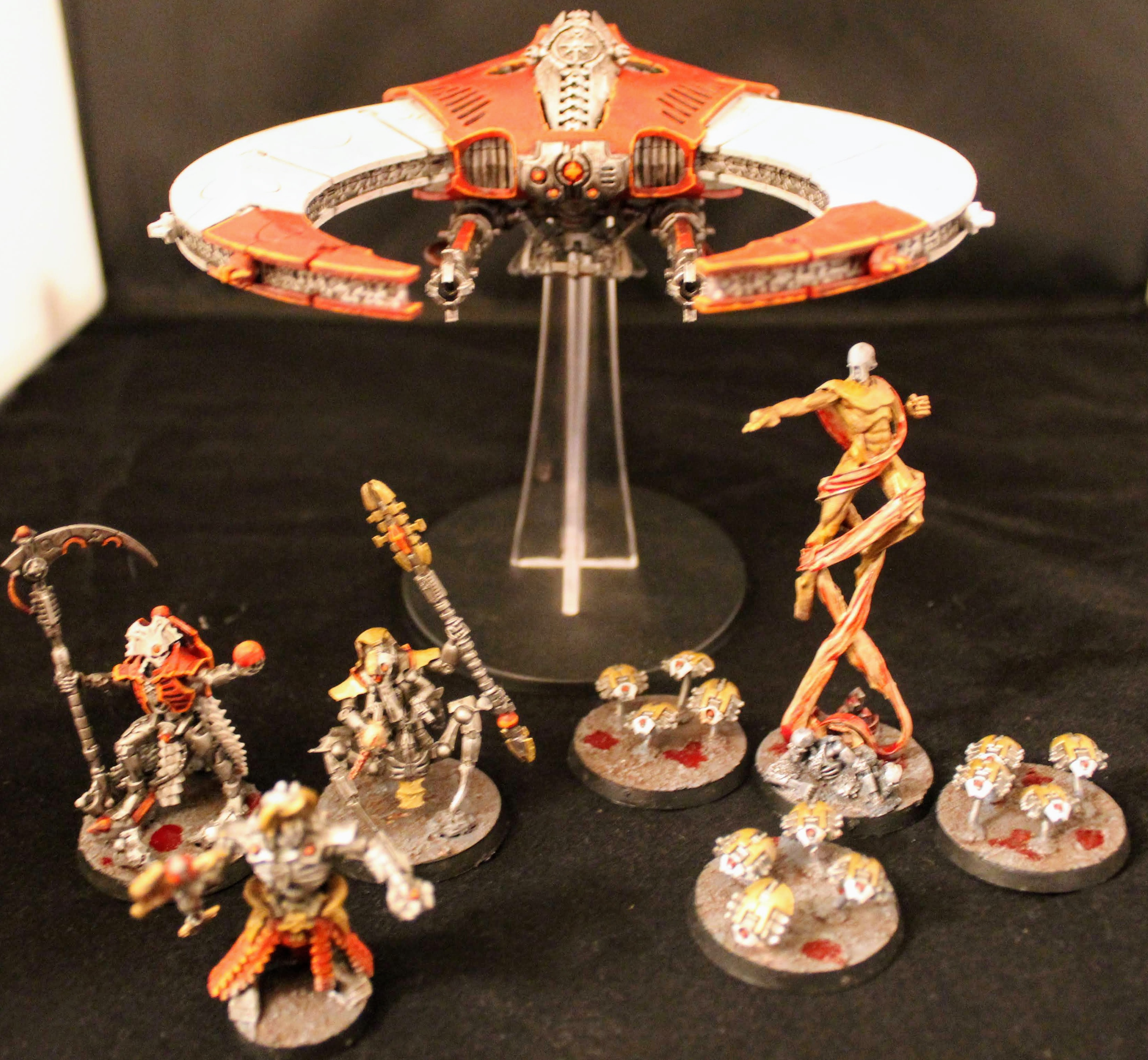 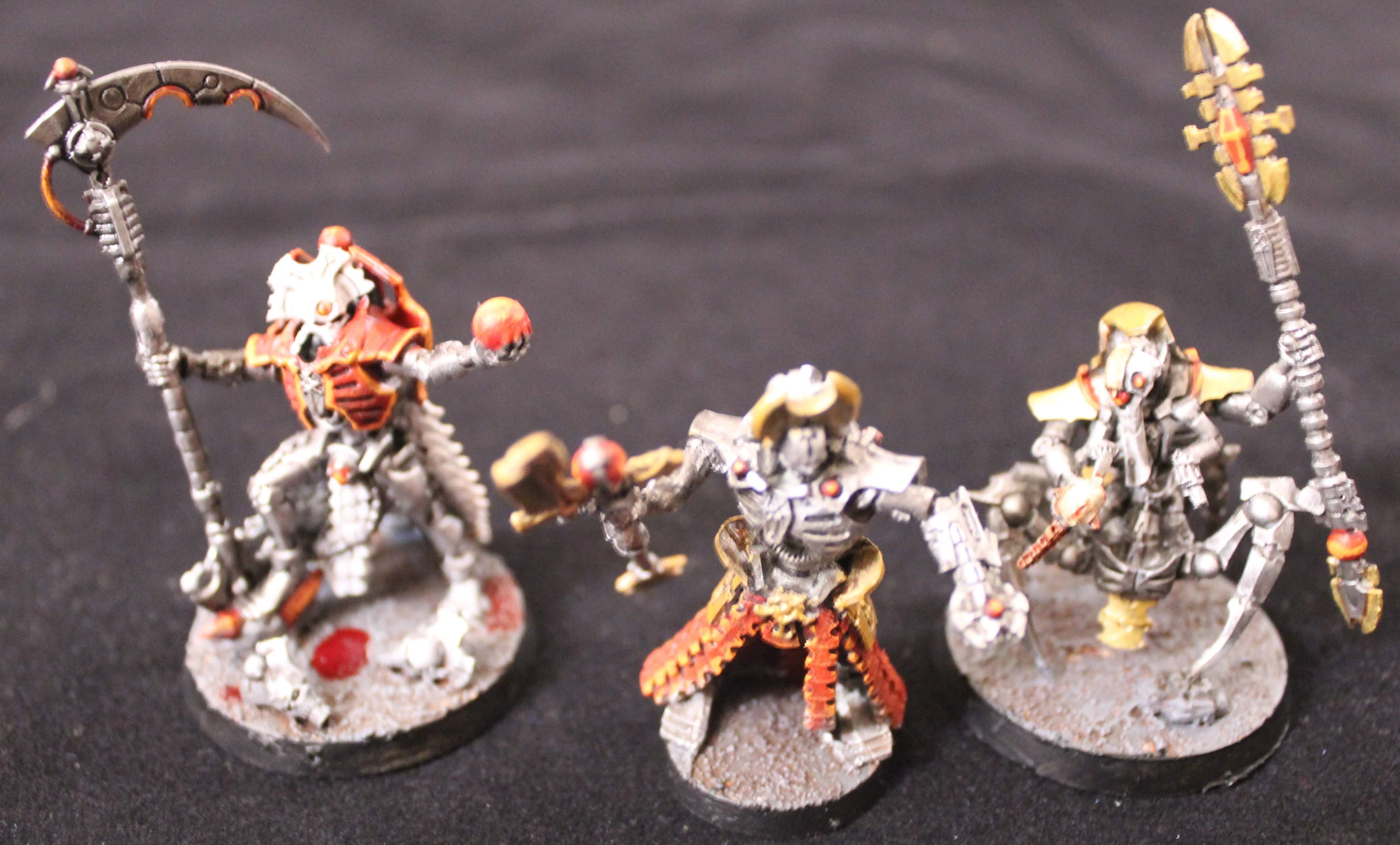 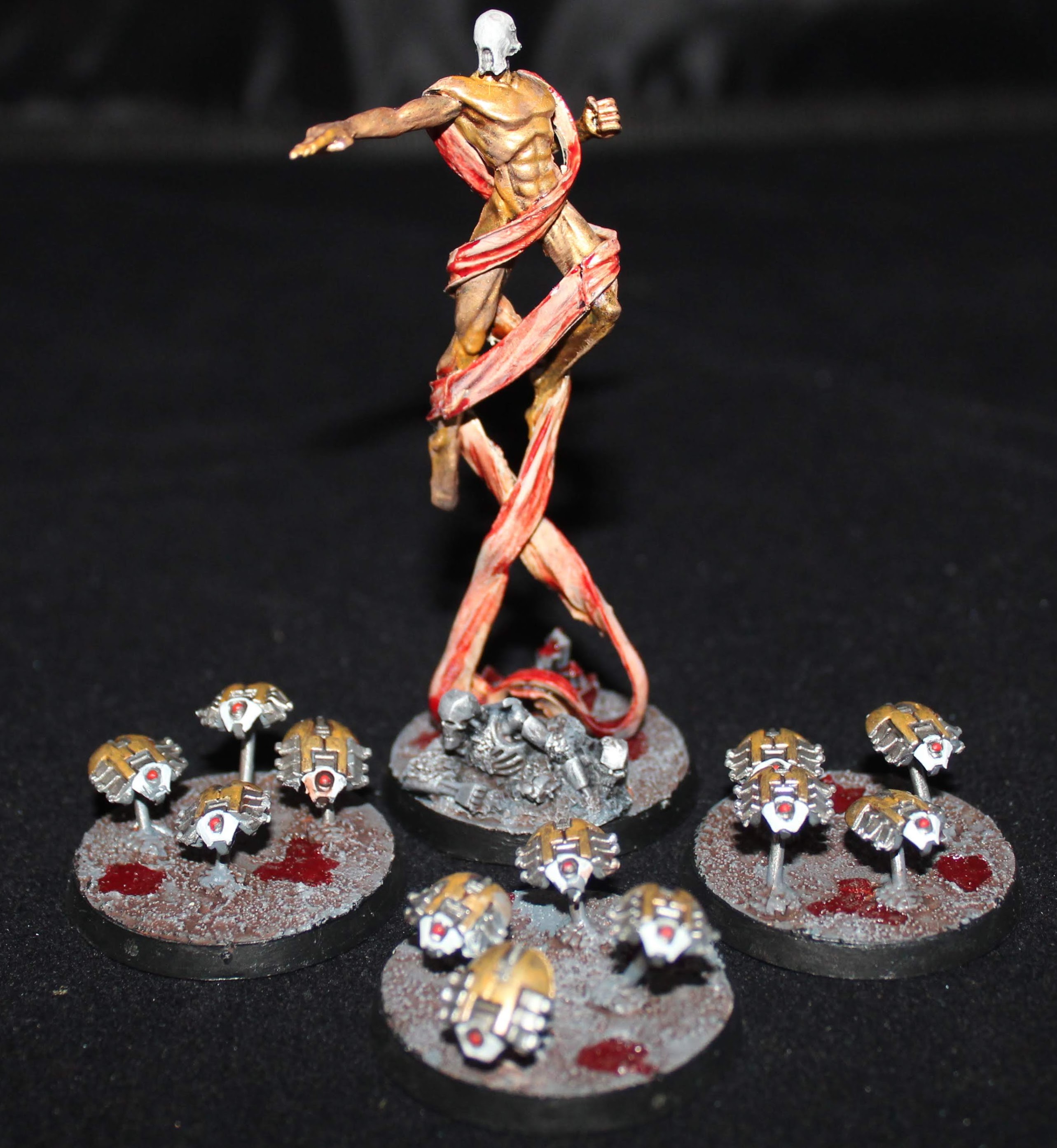 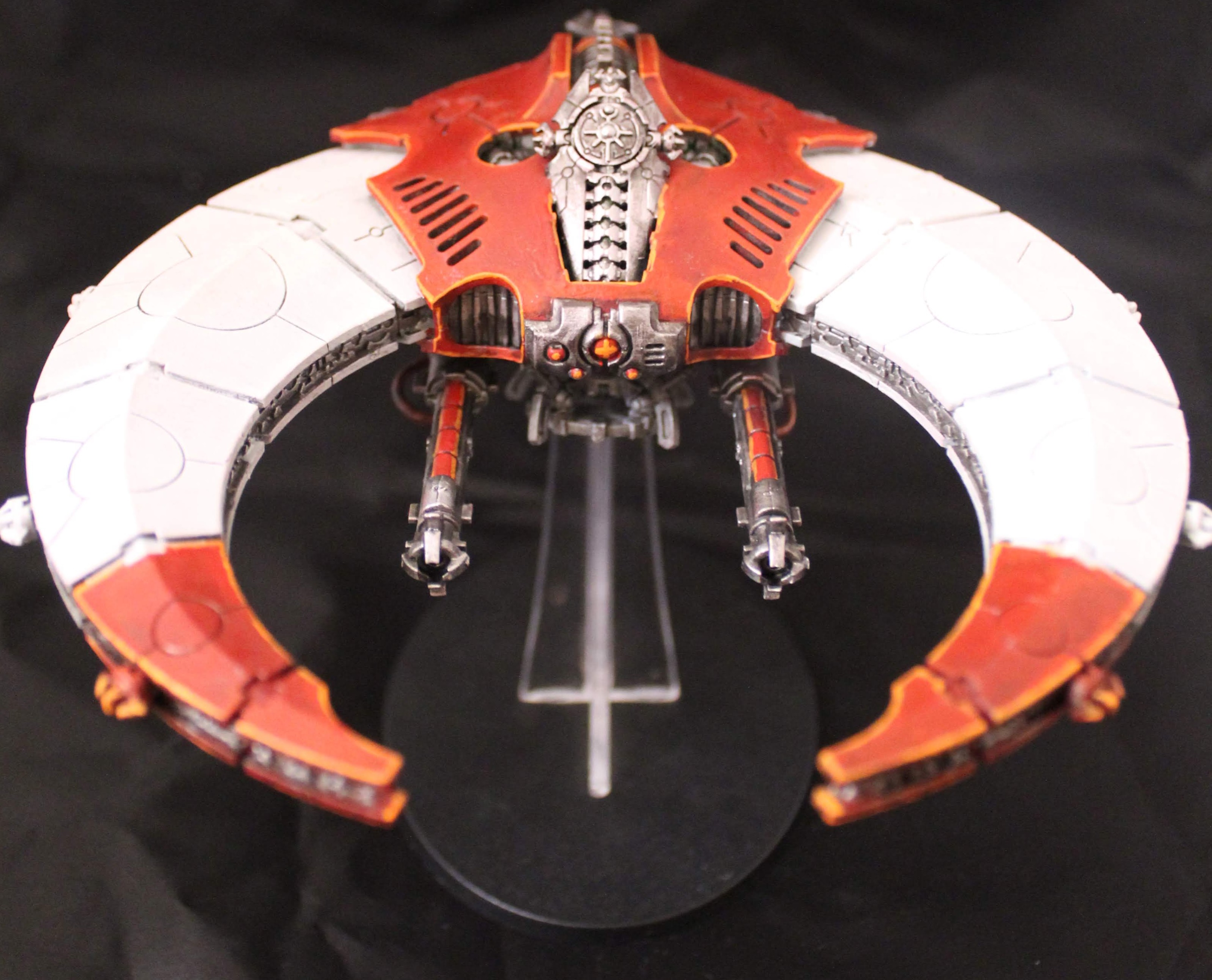 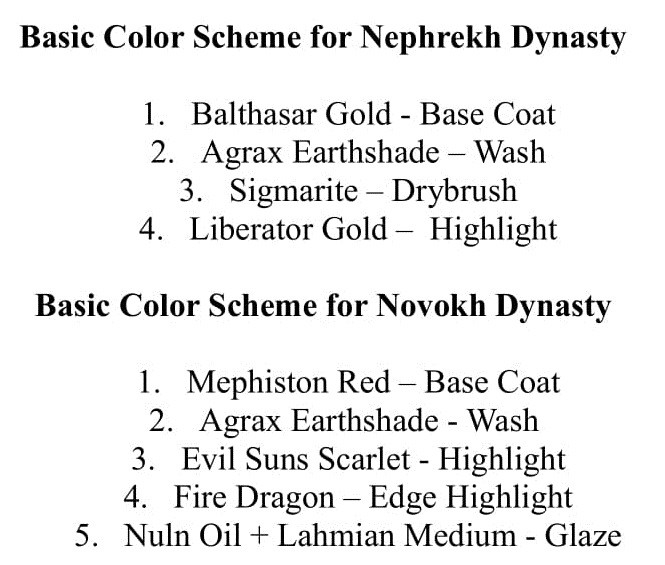 Click the on the image above to see painting details.

That it is folks, I set out to get an army painted in about 6 six weeks and I got it done in 5 non-linear weeks over three months! Not bad considering I had emergency surgery half way through the project. As for my next army to paint this year, I was so inspired from painting the Night Scythe that I am going to paint White Scars! It should be a fun project now that I have completely conquered any fear of painting white.

I won’t forget my Necrons as they will have a nice shelf to live in, as you can see below! 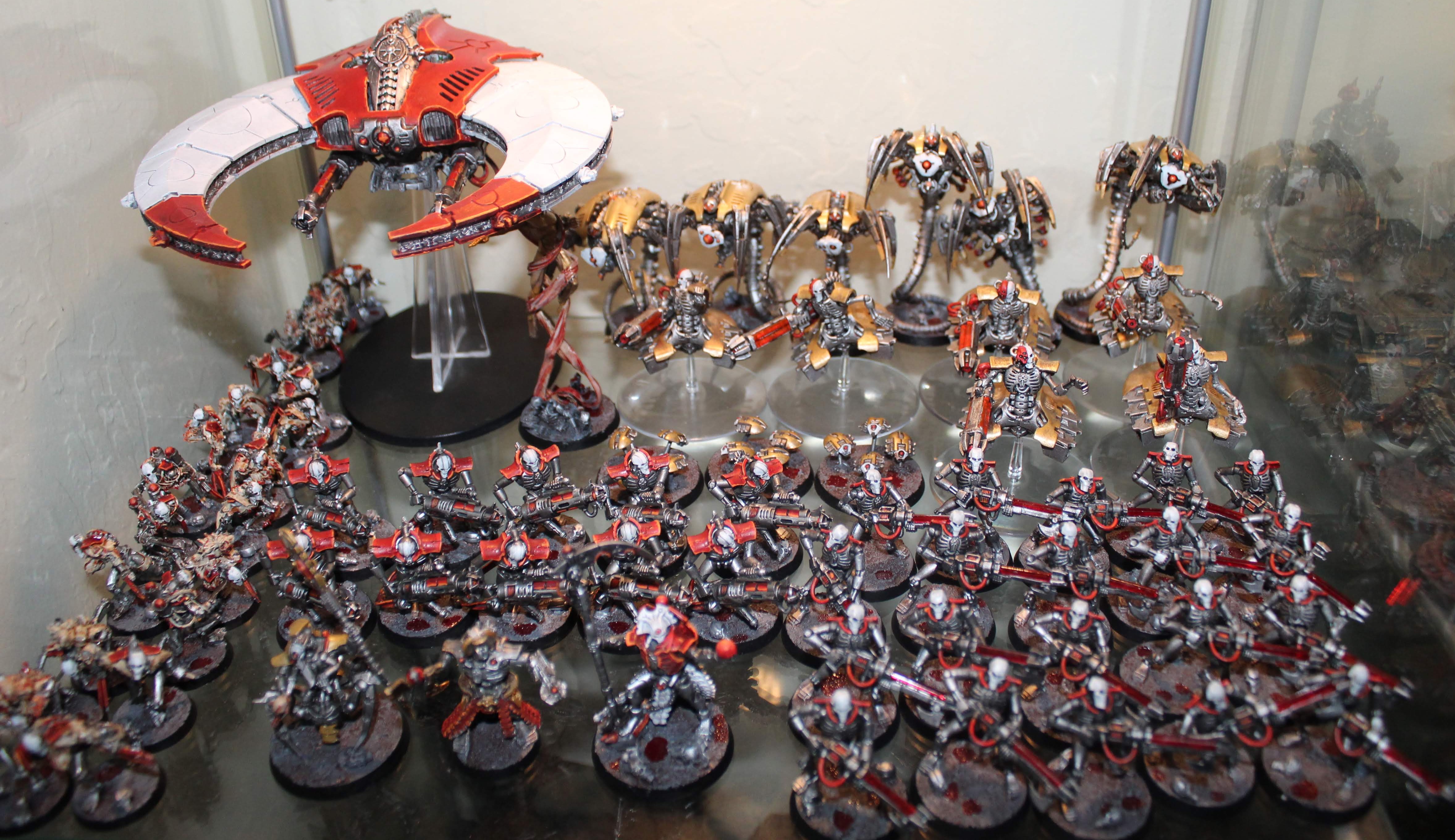 For the complete Necron Project check out the links below.