Week One- finally happened, sorry it took so long to get this project started, but I try to wait for two things, first was release of Contrast paints because as a speed painter I want to really see if they could decrease my paint time. Second, was my small hope Space Marines 2.0 would be released and I wouldn’t have to change my army design plans halfway through.

Anyway, I got tired of waiting for new Space Marines and said what they hell, lets get the painting started! The first units I wanted to tackle was the Primaris models because the Storm Reapers posed the hardest challenge, with trying to balance black & white in proper proportions. I wanted to try my hand at some simple conversions to make the Intercessors really stand out. Since I decided to equip my Intercessors with the never used Auto bolt rifles, I decided to take some bits from unused Primaris Reiver guns.

This had the unintended consequence of creating a bulkier shoulder, where you can’t fit over the standard Space Marine shoulder pad. Instead of shaving it down, I found a much better solution by using some extra Aggressor shoulder pads giving the Intercessors a more badass look.

The Storm Reapers beyond juggling white & black, I had to figure out what sort of color I wanted for the accents, at first the obvious choice would be Red to unify with the White Scars, but I wanted them to stand out even more. This lead me to choosing an orange as, getting the idea from a fantastic White Scar army done a few years ago by GMM Studios.

I wasn’t sure about the results, but it was going to be a fun journey.

Taking the lessons from the above Warhammer TV videos above, I started with two test models using the old standard GW paint method of base, shade, and detail paints. This gave me a good idea on if the my color scheme was going to work, and with some confidence built I gave Contrast paints a go the rest or the first time.

After spray base of Army Painter Matt White I dove right in with Apothecary White using a 50/50 medium split to avoid brush streaks. The results were fantastic with the grey tint of the paint pooling in the recesses as expected.

“Every child is an artist. The problem is how to remain an artist once we grow up.”
― Pablo Picasso

Next I went with Black Templar for the backpack, holster, shoulder pad crest, eagle, and some gun bits. Blood Angels Red was the big risk painting the eyes, gun bits, and shoulder pad trim. Then just tied some things together with Basilicanum Grey for metal parts. Once done, it was time to go over with layered highlights using Troll Slayer Orange over the red and various dry brushing for everything else. The final touch was the Storm Reapers transfer which you can only find strangely enough in with Imperial Tank transfer sheets.

Here was the result… 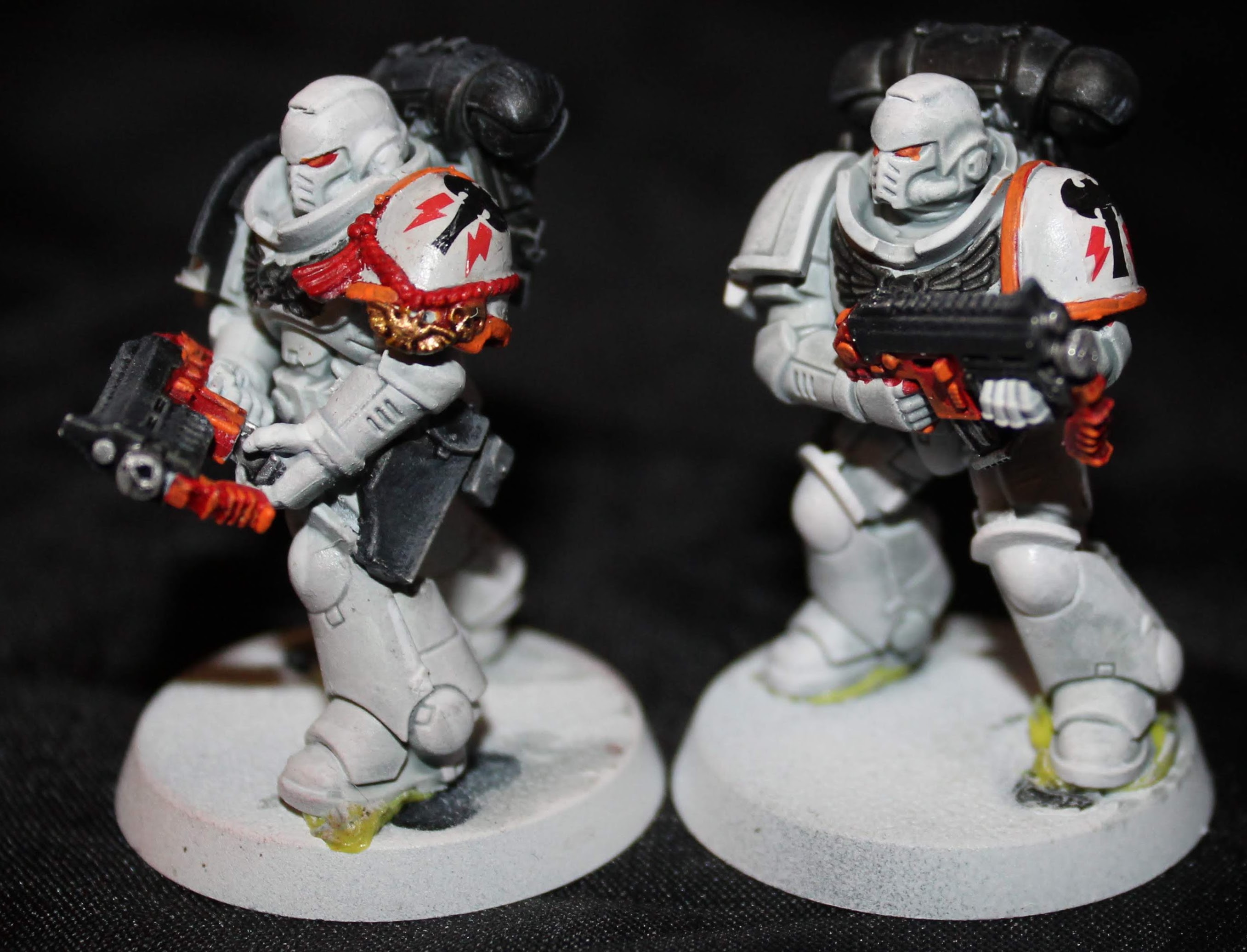 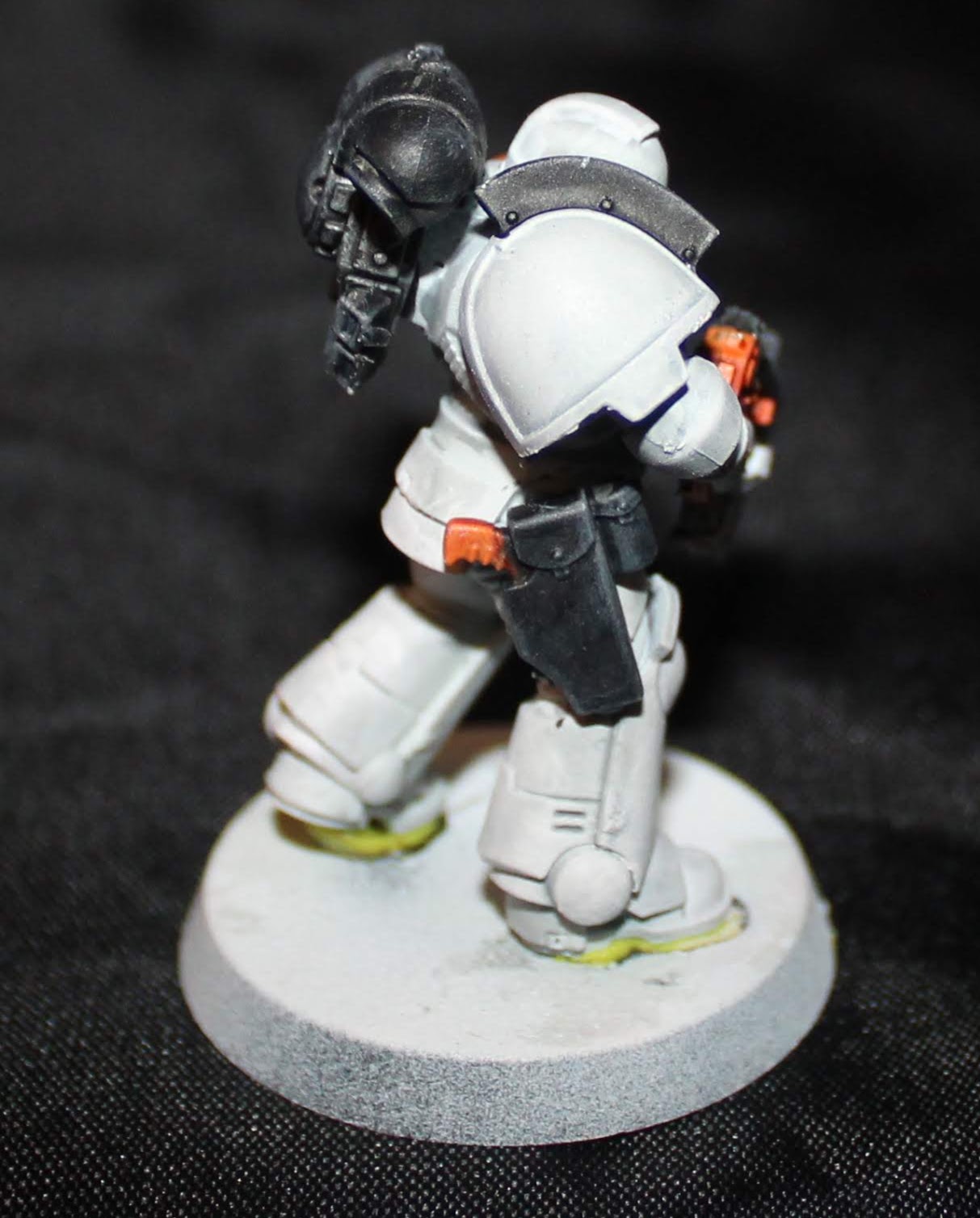 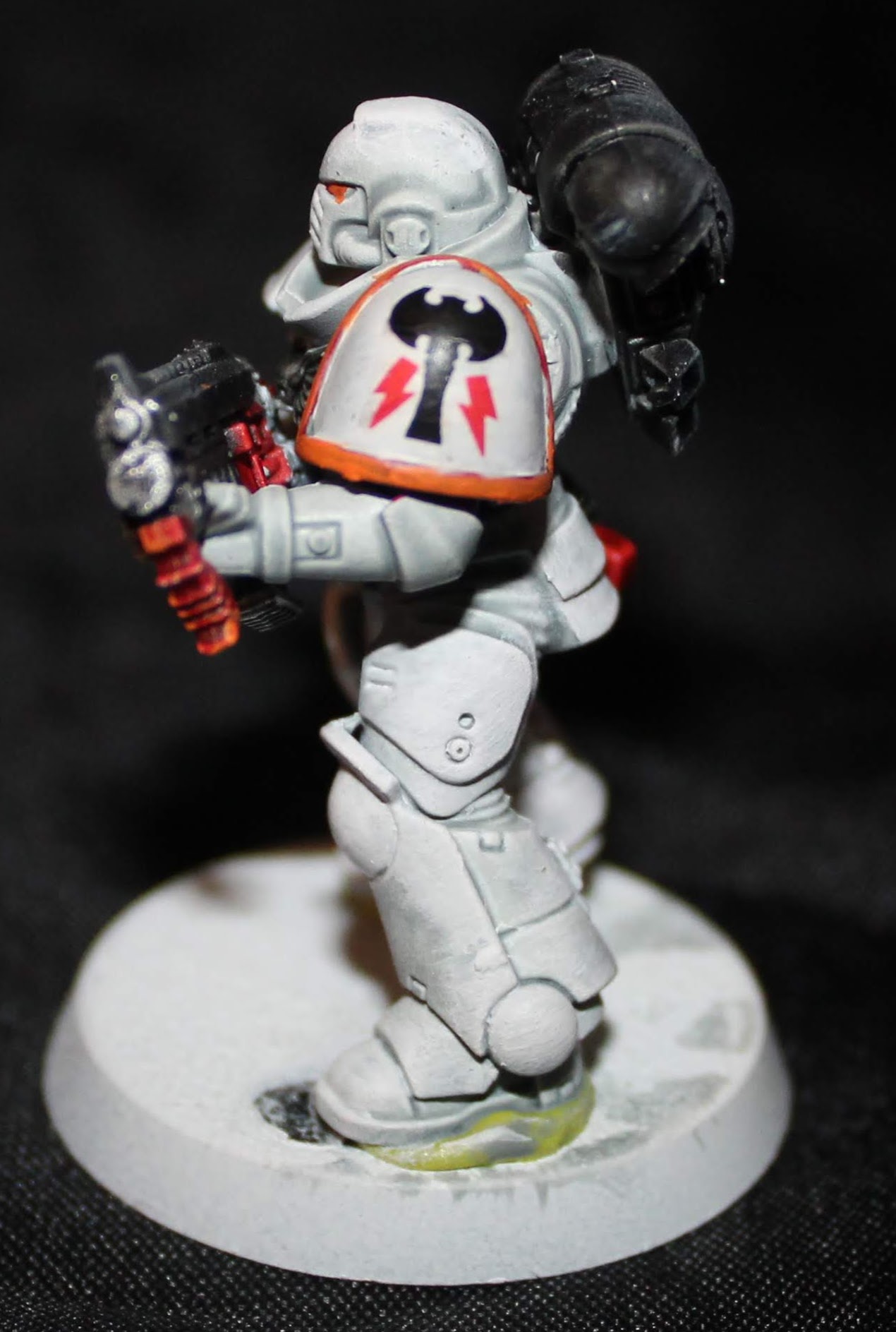 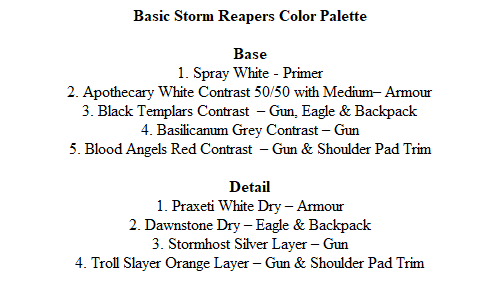 All told, this took 2.5 hours of paint time to complete, not including the transfers. There is a bit of clean up still needed, but for table top quality and as eye grabbers a few feet away they do an excellent job. The biggest thing I learned using Contrast paint for the first time, and especially with white & black is bleed over. It is a pain in the ass to fix black mistakes and Contrast paints acting like a stain doesn’t help as well.

I think a good 1/4 of my time was fixing mistakes, I also learned it is best to use Apothecary White and then dry brush before applying any more colors to the models. My goal is get to the point of painting this army by just Contrast and Dry Brushing on at least 90% of the model, for only just the littlest of details. This is basically two step painting and a goal I have always dreamed would never be possible, and a 10 min paint time limit per model.

Next week, I look to finish the other Primaris units, by painting all the Inceptors, using what I learned from the Intercessors to get them done even faster!