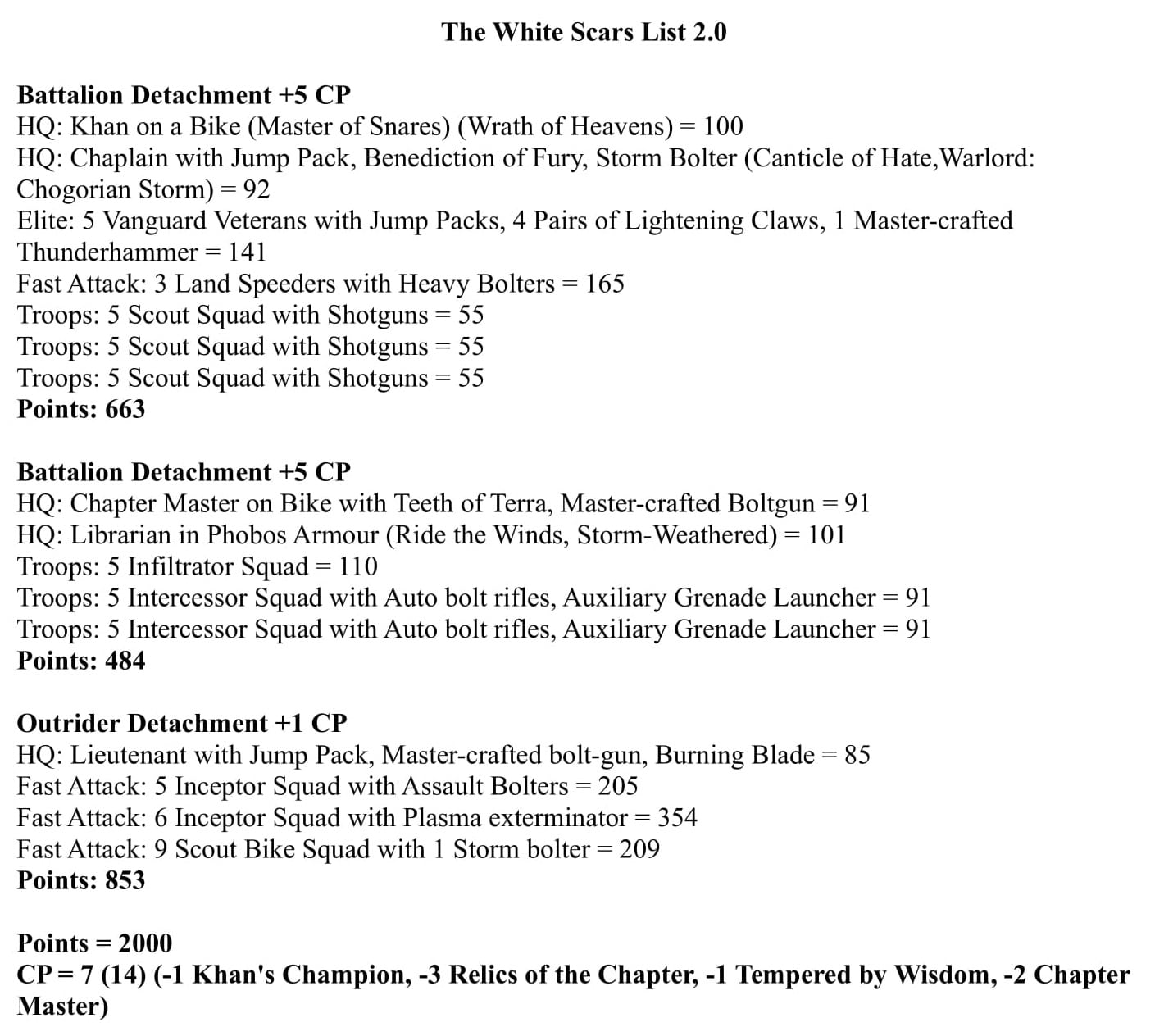 Since the Space Marine White Scars release I have played plenty of games with the new rules, but a few weeks ago I finally got a chance to take pictures and record the exploits. As the White Scar project was already underway before the new rules, I knew I had to make due with most of the models I already decided on. Thanks though to some good point reductions I was able to move things around to get me a few new toys to play with while keeping the core of old units I was using previously intact, namely everything I had already painted.

As for the game I was able to document, I had the pleasure of playing my friend Anthony he who happens to be the top ITC player for Deathwatch for 2019 and was in the top 5 last year. So it would be good test of new vs. old and see just how “OP” White Scars could be against a great player. 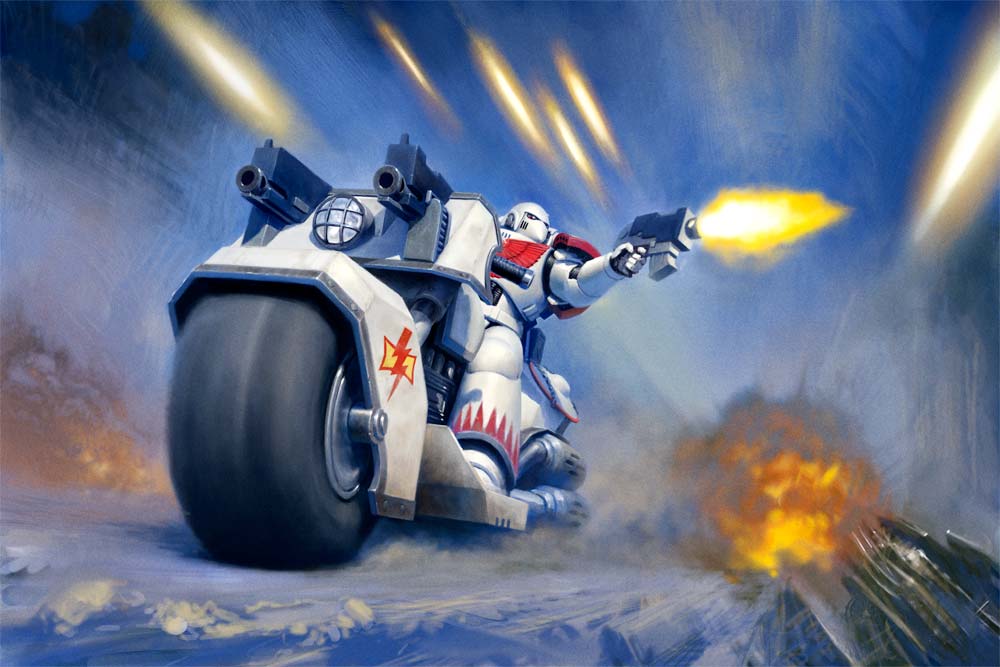 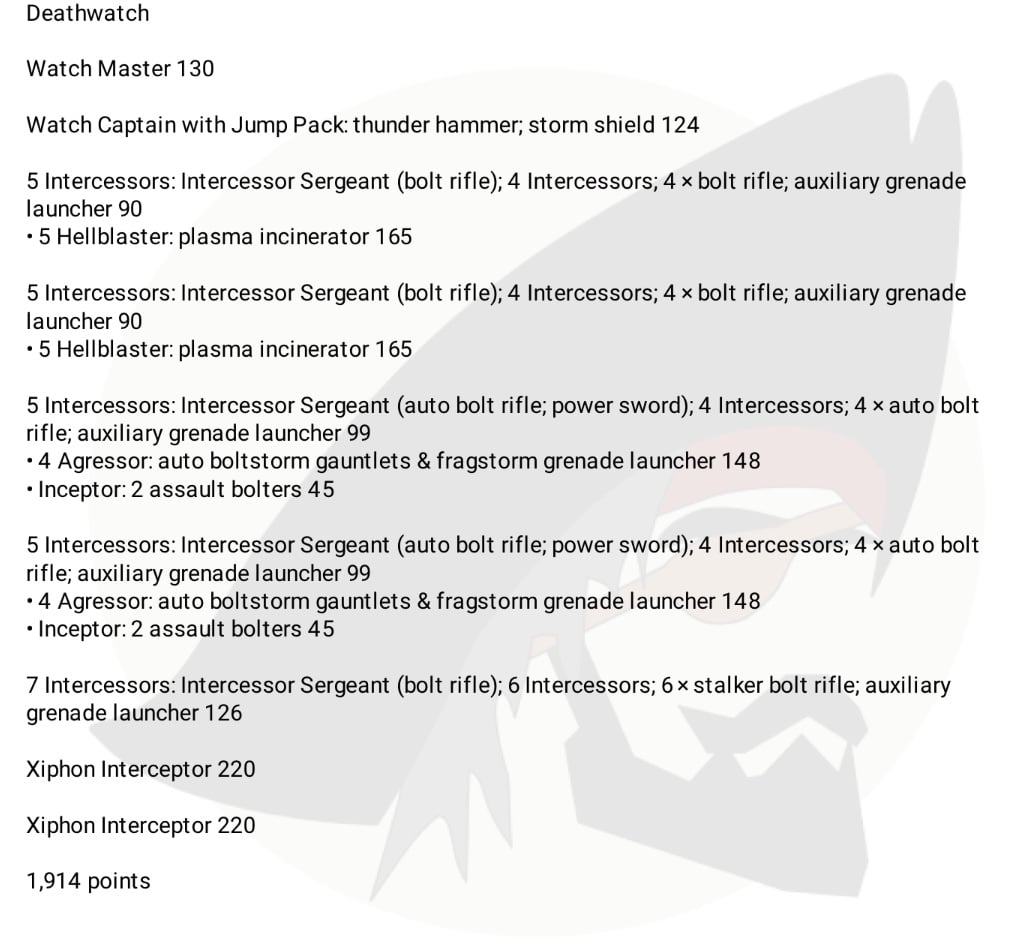 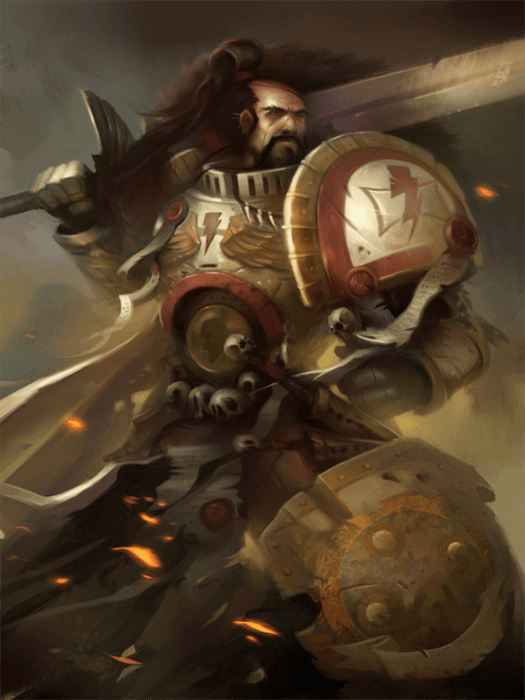 TACTICALLY— I knew against Anthony he would play much the same way my White Scars operated, by coming at you in waves. The first wave being the Xyphon flyers hitting any high wound models I might have, followed by me having to kill the Xiphons on the following turns while the rest of his devastating shooting army moves up or drops down. My plan was to give him as many targets as possible to start and hope he doesn’t realize the real threats lurking for the later turns. I also knew I wanted to go second even with the Xiphons bring the pain for the first round, but I had to counter whatever he dropped in later in order to have a chance.

PRE-GAME — I had been dividing my new White Scars lists into three parts, by taking advantage of the doctrine progression of the Space Marines. This meant I would hide as much as my army as possible turn 1, not giving up more than 1 kill and then start dropping the Inceptors with the Tactical Doctrine, and bring my outflanking Scout Bikers at the same time. Then follow up with the hammers units on turn 3 in the Assault doctrine. For this game, I though chose to change things up, by putting most my army on the board turn 1, this was partly the terrain’s fault, but mostly because the deployment type we got meant I couldn’t hide most of army anyway, especially from Anthony’s flyers.

We ended up playing an ITC formatted mission, as this the standard in my area and we both knew them really well. We rolled and got Mission 3: Nexus Control which is a four objective game with kill points, a host of secondary points and bonus points that required you to hold all four objectives at once. I was fortunate enough to be able choose to go first or second and decided on second, so I could react to Anthony’s later Deep Strikes.

Turn 1 ending up being very strange. I deployed as much as I could keeping only my Inceptors and Vanguard Vets in reserves. This put my Scout Bikers out in the open, and a very juicy target for Anthony’s flyers. So when Anthony moved up and decided to take aim at my Land Speeders, it caught me off guard, which only made sense. since it would Anthony’s only guarantee kill. This though left my Scout Bikes free to roam on my bottom half. On my turn, I moved my Scout Bikers into charge range of a Kill Team, I also sent my “Ghost Rider” Khan down the middle behind ruins to get a charge off without being overwatched. My plan was to hit the kill team with both my Captain and Scout Bikers. Luckily, my plan worked, but terribly I wasn’t able to chew through enough of the Kill Team to get to the juicy Aggressors before they swung. This meant Anthony was able destroy almost my entire Scout Biker Squad thanks to the Watch Master re-rolls. It was certainly a blunder on my part, but at the very least the Khan held to fight another day.

Turn 2 Anthony brought he is flyers around to pick off some chaff protecting my Characters and followed up by killing the Khan, but not before I used “Only Death Does Duty End” to finish off most of the Kill Team, this allowed me in the bottom half to drop down my Bolter Inceptors to finish off them off, while the rest of army chipped away at another.

Turn 3 would as usual be a critical one for any White Scars. Anthony as expected blew away my Bolter Inceptors with his Hellblasters which had to come down, then he used the rest of still impressive shooting to clear most my screens, but I knew on my half turn it was going to be do or die. I brought down the Plasma Inceptors and moved all my characters in position to deliver some crippling blows. I was able to destroy all the Hellblasters with the Plasma Inceptors, while my Assault phase finished off a few Characters and all but 1 kill team.

Turn 4 Anthony still had his Xiphons at full strength and a Stalker Bolt Rifle Kill Team, along with a few beat stick characters. Anthony proceeded to kill almost everything leaving me with 1 plasma Inceptor, a few Vanguard Vets, and two characters. On my turn I was able to scrounge enough to tie him on the kills by deleting his remaining characters.

Turn 5 Anthony kept on killing leaving me with just a few Intercessors and a Scout Squad on my home objective and my Warlord Chaplain hiding. This is where I made a big mistake and tried to finish off a Xiphon with the Chaplain, I wasn’t able to finish the job and left him open to dying next round.

Turn 6 went sorta as I expected, with Anthony going for the tabling, he used his perched Stalker Kill Team to kill my Warlord Chaplain, while the Xiphons went on to deal with my out in the open last units. Fortunately for me Anthony goofed randomly on target priority leaving me with 2 Scouts to hold my objective thus, claiming more while he killed more. After he did it Anthony knew he made a mistake, but he felt like he was well ahead in points, which I also thought as well, but when we added up the points I had miraculously won the game 25-24! It had come down to Turn 3 where got Kill more and Hold More, even though Anthony maxed his secondary points, that one turn was the difference. As we traded back points for most of the game.

I couldn’t believe I won the game, with the obvious blunders I made. I didn’t feel like Anthony made that many mistakes, accept for targeting the Speeders Turn 1 and the final turn targeting, but as we both felt the game wasn’t really close, I guess we both could have paid closer attention. Either way, it was a great game and my first win against Anthony in close to a year, so it felt good. I hope my next game I get to report with the White Scars is against another Space Marine Chapter because I been told that is what the White Scars are really good at killing.