Week Two- saw my comfortably using Contrast paints increase and having to patch up some models which had been in different stages of completion before I got to them. The models in question were two full squads of Inceptors, which with the stupid flying stands always presents problems.

The Inceptors are composed of one six man unit of Assault bolters of the easy build variety and the multi-part kit of Plasma Exterminators. The subtle differences between the two kits were way more pronounced than I had expected. The multi-part kit had a lot more fine details, especially with the legs and weapons. It added detail made the Plasma Inceptors easier to paint and far more rewarding. I followed the same paint plan as I had with the Intercessors, with some added tricks to keep pesky bleeding of the contrast from getting into places it shouldn’t be.

By using more of the orange I felt like it balanced out the black and white for the Storm Reapers creating a unit that has some more pop especially when looking down from a few feet away.

To prevent the Contrast Black Templar from getting on the white of the Inceptors, I used Vallejo Liquid Mask. There is a ton of usages for it, as you can see in the video above. To get a better handle on the orange I was going to use, I used the above Warhammer TV video as a simple guide for what I wanted to do. It lead me to really build up the cooler orange starting with Gryph-Hound Orange Contrast, then Ryza Rust Dry, but the heavy lifting came from using Lugganath Orange Edge paint.

“Every artist was first an amateur.”
― Ralph Waldo Emerson

This all meant trying to keep the colors a bit cooler than I had done with the Intercessors, I used mediums or watered down the contrast paints to prevent thick coats, allowing dry brushing or highlighting to take over on the edges while the contrast did the work for the recesses. Like the Intercessors before I used the Storm Reaper transfers, but this time they were mostly angled sideways because of the shoulder pad sizes and the slight oversize of the transfers themselves.

Here was the final result… 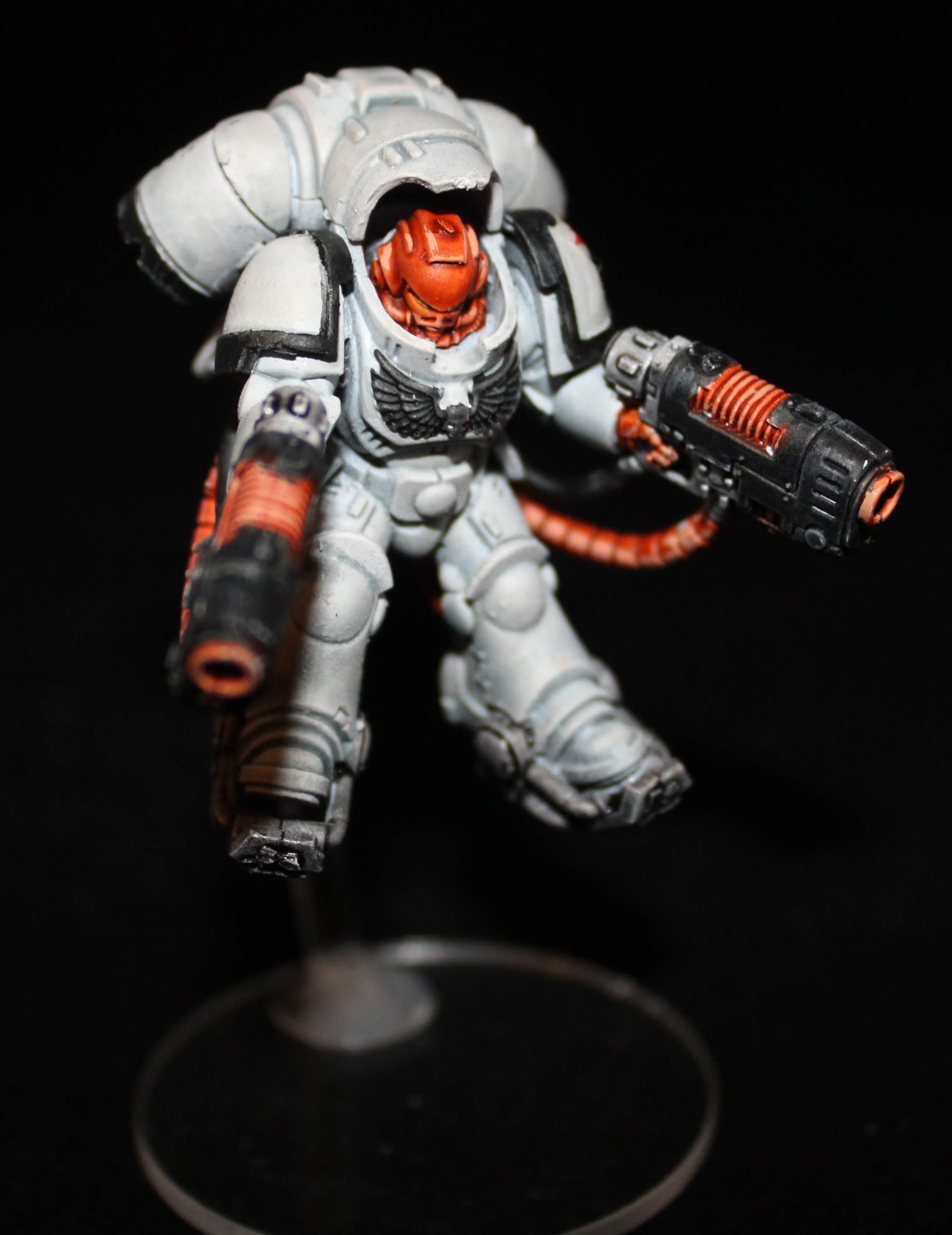 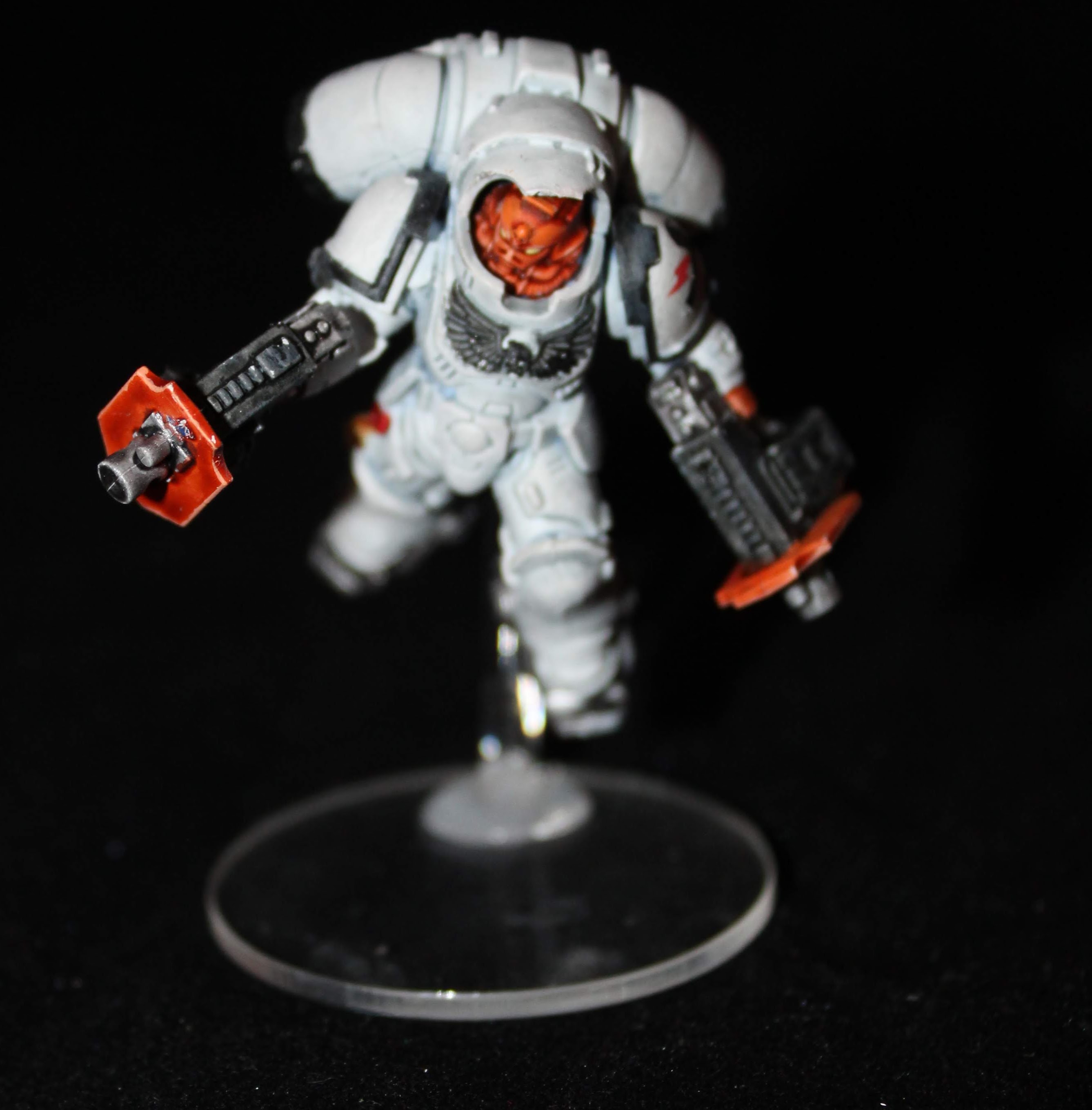 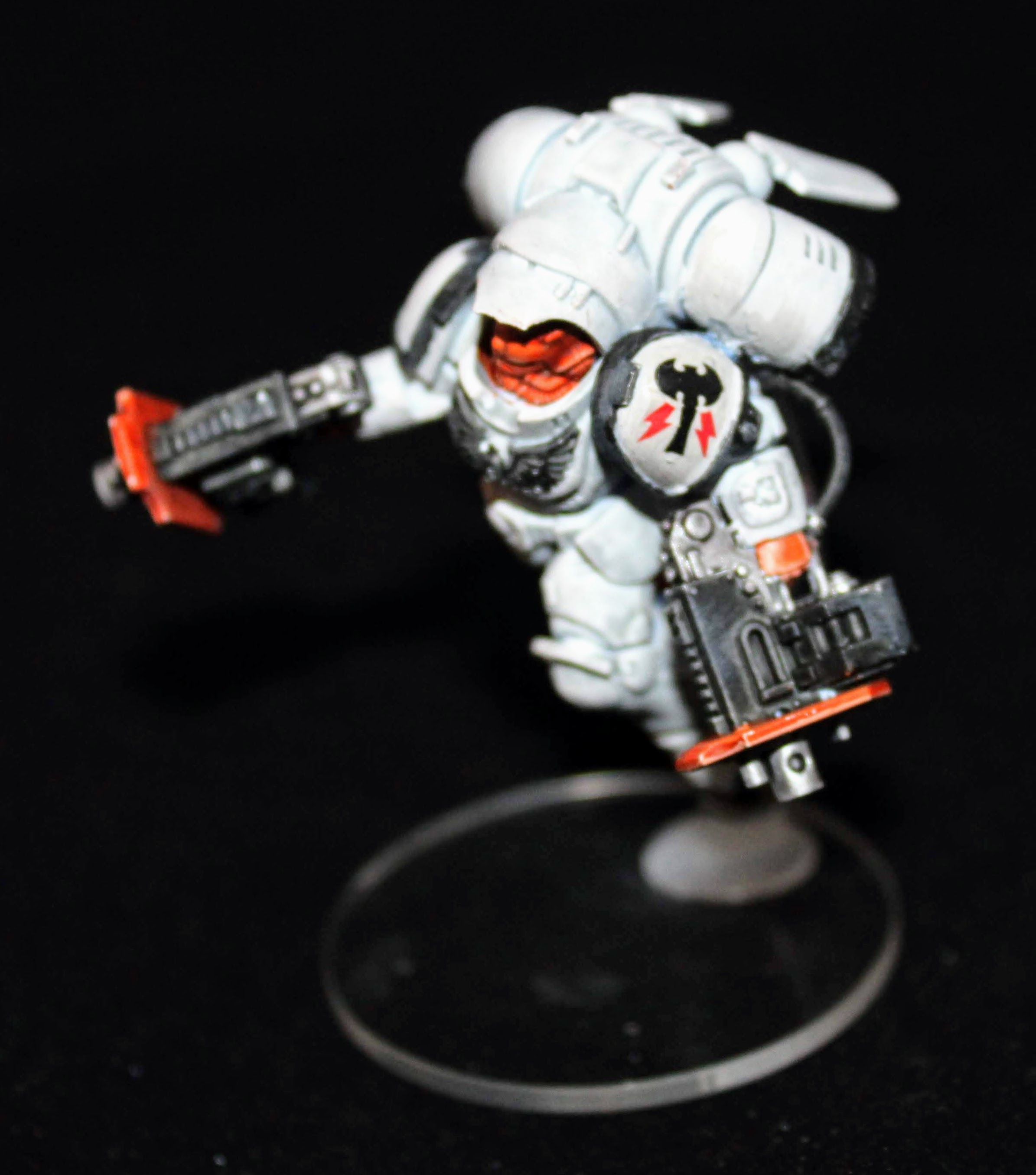 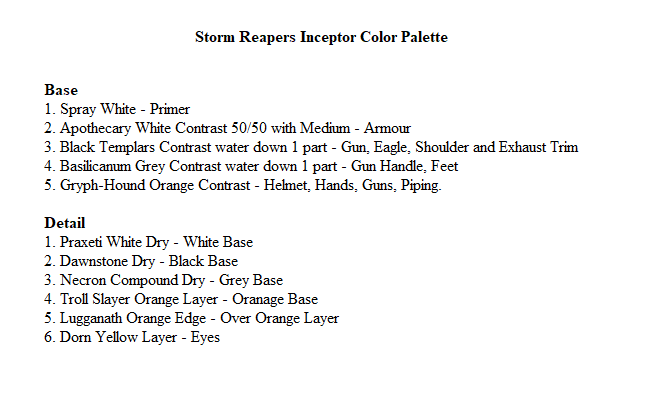 Thanks to what I learned from the Intercessor experience I was able to get the time down to 2 hours to complete the 12 Inceptors. This was minus the curing time it took for the liquid mask. I had a drag in paint time, because of the model condition as well. The contrasts reacted differently based on the previous basing colors I had to go over with the contrast base paints. Easy Build Blue being the most annoying to deal with.

Unlike the Intercessors, I spent less time fixing errors and more time highlighting and I think the results are much better even with some more cleanup being necessary. I did though mostly get the painting down to just contrast,dry brushing, and minimum highlighting.

Finally I really liked the time I saved using clear acrylic bases, which are fantastic and easy alternative for any flying model, especially with the annoying new flying stems Games Workshop has us using now.